A new simpler way to guarantee settlement between banks of payments made through Faster Payments, the UK’s 24/7 real-time payments service, has been introduced as part of changes announced today (Monday 5 October 2015) by Faster Payments Scheme Limited (FPSL).

The new ‘pre-funding’ settlement system has levelled the playing field for participating Payment Service Providers (PSPs) by guaranteeing settlement between all participants without any shared risk. The new system has removed the implicit obligation for smaller participants to underwrite a share of larger participants’ transactions that existed as part of the previous liquidity and loss sharing model. 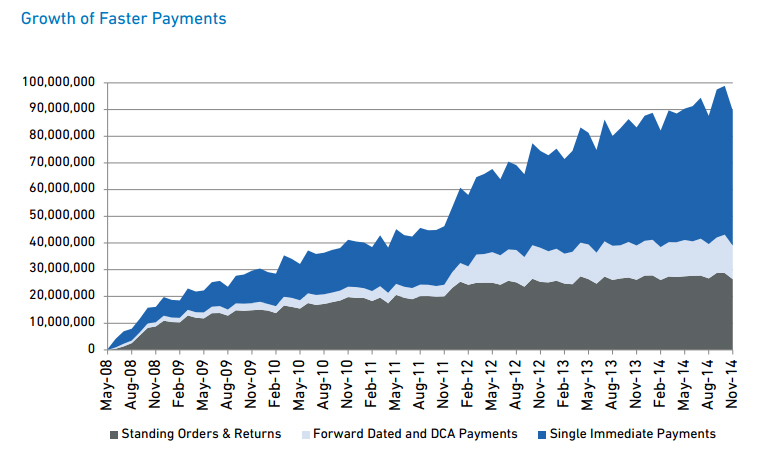 Under pre-funding, all PSPs participating in Faster Payments leave a cash deposit sufficient to cover their net transactions in a segregated, interest-bearing account at the Bank of England. These deposits underpin the net flows of payments between each participant, and will only ever be used to settle the obligations of participants if they get in to financial difficulties.

Payments between end customers using the Faster Payments Service have always been irrevocable and guaranteed by each customer’s PSP at the time the payment is initiated by the customer. Participants settle with each other three times each business day – pre-funding prevents the receiving bank from facing any risk of unpaid liabilities caused by another participant failing between settlements.

Faster Payments currently has 11 participants that connect directly to the service, while a further 400 PSPs access the service indirectly through sponsor banks. Pre-funding paves the way for more challenger banks and other non-traditional players to benefit from direct access to Faster Payments through FPSL’s New Access Model programme by removing the potential barrier to entry created by shared credit and settlement risks.

Three challenger banks have already committed to take advantage of pre-funding and join the Faster Payments Scheme in 2016, with further PSPs in advanced discussions to join through the New Access Model in due course. The identity of each of these PSPs is subject to commercial confidentiality until their respective launch plans are finalised.

The introduction of pre-funding also further reinforces the financial stability objectives of FPSL and the Bank of England. This is in line with the international governance and operational risk standards set out by set out by the Committee on Payments and Market Infrastructures (CPMI) and the International Organization of Securities Commissions (IOSCO).

As a systemically important payment system, the integrity of Faster Payments is of paramount importance to every organisation that offers the service and all end users across the economy. Eliminating settlement and credit risks through pre-funding ensures Faster Payments has a stable and consistently available end-to-end service, and prevents the risk of financial contagion by ensuring the failure of a single participant cannot have a knock-on effect to other participants’ balance sheets through unpaid liabilities. The new settlement model has been implemented in conjunction with the Bank of England.

“Today’s customers expect their payments to be made in real-time, 24 hours a day seven days a week. Access to Faster Payments is a vital part of any challenger bank’s proposition – our introduction of a simpler settlement system is another big step forward in maintaining a stable financial system and supporting greater competition in banking,” says Craig Tillotson, Chief Executive of Faster Payments.