Mobile payments in the US 2015

Apple, Starbucks and Disney are all strong brands with loyal followings, but they also have something else in common: They’re early leaders in the ever-evolving mobile payments market.

Some analysts predict 2015 will be the first year all the pieces — including a larger base of NFC-enabled devices and terminals, and growing consumer acceptance — come together to take mobile currency mainstream. A number of additional companies are also entering the world of mobile payments, such as American Express, which you might expect to see, and Jawbone, which might seem surprising.

Here’s a high-level look at the current mobile-payment and wallet adoption levels – according to CIO.

By the end of this year, 5 percent of the world’s 600 million to 650 million NFC-enabled phones will be used at least once every month to make “contactless in-store payments at retail outlets,” according to consulting firm Deloitte’s annual “Technology, Media & Telecommunications (TMT) Predictions” report.

While five percent is not a staggering number, it represents a considerable increase over last year’s mobile payment usage rate. As of mid 2014, less than 0.5 percent of the 450 million to 500 million NFC-enabled phone owners used their mobile devices for in-store purchases, Deloitte says.

While contactless mobile payments won’t go mainstream this year, “niche adoption” will continue to grow, according to the report. Down the road, mobile payments use via NFC-enabled devices should “rise steadily” as consumers become more familiar with the concept and banks and retailers readily accept mobile payments.

Capgemini’s “World Payments Report 2014” suggests mobile payments will increase to 47 billion transactions through 2015, up from 29.2 billion in 2013. 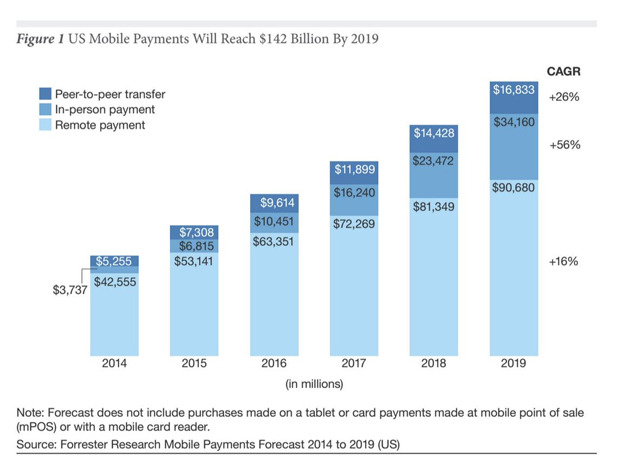 Amex on Apple Watch, Jawbone UP4

American Express is experimenting with facial recognition and wearable technology that could form the foundation for new mobile-payment and security features, according to The Wall Street Journal. Amex tests new ways of using its payment services on devices such as the Apple Watch and Google Glass in its own tech development lab. The company is evaluating facial recognition as a more secure way for mobile consumers to use Amex when paying for goods or sending money transfers. However, the technology isn’t ready for prime time and is still in early testing phases, The Journal says.

The Apple Pay mobile-payment and digital-wallet system debuted in October 2014. It lets consumers with NFC-enabled iPhone 6, iPhone 6 Plus, and Apple Watch devices pay in stores at contactless terminals and buy goods using apps that support the service.

Apple Pay’s impact was significant and immediate. Apple said more than a million credit cards were registered for use with the service in its first three days of availability. Apple Pay “will influence every discussion of mobile payments through 2015,” says Denée Carrington of Forrester Research. “Apple Pay will be the catalyst for new debates on balancing data privacy with customer engagement and loyalty” and will be “the standard-bearer for the best use of tokenization to secure payments and biometrics to combat fraud.”

CurrentC is expected to be available in mid 2015, and it will combine mobile payments and loyalty benefits. Merchant Content Exchange (MCX), a company owned by a consortium of U.S. retailers including CVS, Best Buy, Lowe’s, Sears, Target, and Walmart, backs the CurrentC platform.

Small-scale trials are currently underway in undisclosed U.S. markets, according to IDG News Service, but some critics express doubts about CurrentC. “MCX seems completely unaware of how people actually shop at its partner stores,” Forbes says. CurrentC doesn’t support credit cards, to help merchants avoid those fees. Instead, CurrentC uses debit cards, which don’t provide the same level of fraud protection as credit cards. The system will also initially use QR codes instead of NFC or another wireless technology.

Jawbone, UP4 and Amex

Jawbone, which makes fitness trackers, portable speakers and other consumer electronics, recently entered the world of mobile payments. In mid April, the company announced that its upcoming UP4 ($200) activity-tracker wristband would let wearers make contactless payments via pre-registered American Express cards at PoS terminals this summer. UP4 will use Jawbone’s app to link Amex cards to UP4 for NFC wireless payments. (Microsoft Band is another wearable with some mobile payment capabilities.)

Microsoft will likely enter the mobile payments space in a big way. Here’s the gist of what’s known so far, according to The Motley Fool: The payment platform may be called “Microsoft Payment;” the company filed official forms to become a money transmitter in the United States and already received permission to act as one in Idaho; and Windows 10’s “tap to pair” feature could be used to transmit payments via NFC.

From PC World: “For now, we can only imagine what Microsoft might do. Perhaps the company is cooking up a direct mobile payment competitor to Apple Pay — though any effort on that front may be hamstrung by Windows Phone’s meager adoption.”

The post Mobile payments in the US 2015 appeared first on Payments Cards & Mobile.