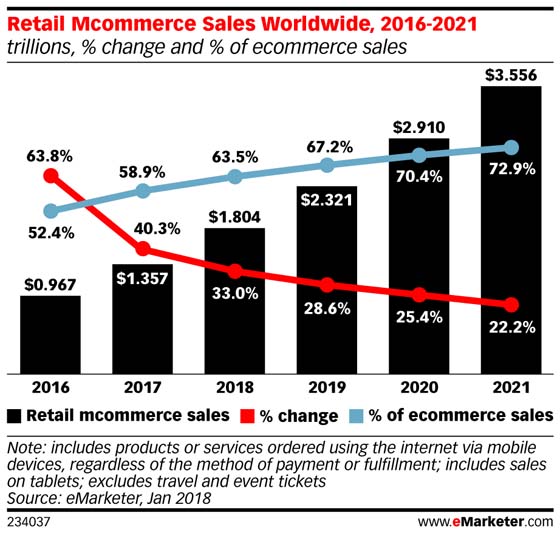 A majority of first-time digital buyers are now completing transactions via mobile devices, specifically smartphones. And as this audience becomes digitally mature – moving from browsing to buying – their purchase frequency and amount spent online will only increase.

And m-commerce purchases are becoming more frequent, as mobile basket sizes and average spending grew in 2017. Each region had notable growth in mobile’s share of e-commerce. In Asia-Pacific, the proportion grew from 70.3% in 2016 to 76.1% in 2017. In Western Europe – where tablets play a role in several countries – it jumped from 31.3% to 35.4% over the same period.

In terms of total retail sales worldwide, m-commerce accounted for 6.0% last year. eMarketer expects that by 2021, that share will double to 12.7%, due to continued m-commerce growth, especially in Asia-Pacific.