A survey by Compass Plus has revealed that while millennials rely heavily on their mobile phones, they consider them one of the least secure payment methods.

The results show that 93% of consumers under the age of 30 cannot imagine leaving the house without their phone and would rather forget their wallet than the all-important gadget. However, despite this reliance on the mobile device, an overwhelming majority (86% of respondents) believe the mobile is one of the least secure ways to make payments, alongside cheques and contactless cards.

Interestingly, when asked what their primary way of paying would be in 10 years, nearly a quarter (22%) of millennials think they will be paying by phone – coming second to multiple methods (39%). The fact that millennials believe they will mainly be paying by mobile in 10 years, even though they consider it to be one of the least secure ways to pay, shows that the age group values convenience over security. 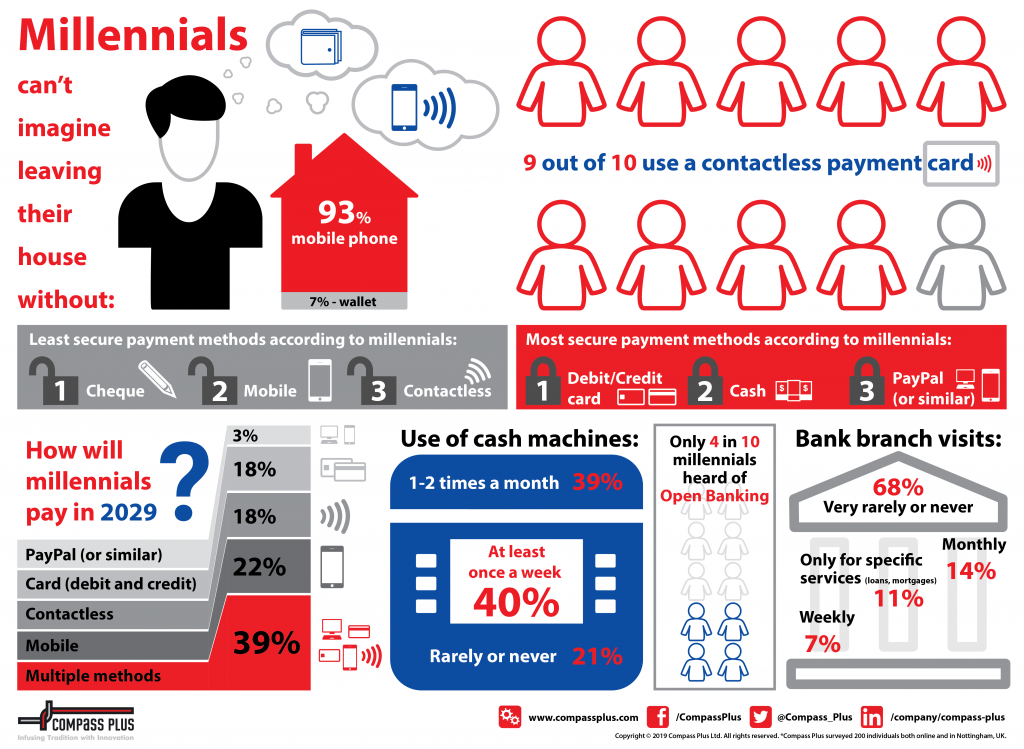 If we compare these results to the 2018 survey, it is noticeable that the millennial generation is still unsure about the security of mobile payments. In 2018, mobile was also voted the second least secure payment method, behind using multiple methods (44%) and almost a third of surveyed under 30’s saw it as their primary payment method in 10 years’ time – although this number has dropped to 22% a year later.

The survey also revealed a completely different perception of cash by those under the age of 30. Despite not seeing cash as a future of payments (with no respondents believing they would be using it as their primary payment method in 10 years), the younger consumers consider cash to be one of the most secure payment methods. It came 3rd after credit and debit cards with an impressive trust rating of 75% amongst millennials.

The continued reliance on cash is also reflected in millennials’ regular use of ATMs. Though not the largest age group to actively perform ATM transactions (57% of over 60’s use ATMs weekly or more often), millennials still find themselves regularly making a trip to the nearest self-service terminal – almost 40% do it at least once a week.