Lloyds Bank trials are exploring how the use of Near Field Communication (NFC) and contactless technology can improve the registration process for those setting up mobile banking.

The ‘tap to bank’ technology has so far been tested on over 125 people, enabling them to 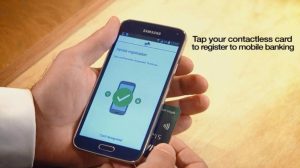 use their Lloyds Bank contactless debit card as a way of securely authenticating their identity when setting up the mobile banking app.

Instead of receiving a phone call from an automated system to complete the mobile banking registration process, customers will be able to simply tap their contactless debit card against their NFC enabled Android smartphone and instantly authenticate themselves.

By replacing the automated phone call with the ‘tap to bank’ authentication, the vast majority of those involved in the testing found the process is simpler, quicker, and easier to use. It is anticipated that in the future, this innovation can also be applied to other tasks, such as authenticating new payments.

“With the widespread take up of contactless cards and most new smartphones now having NFC technology, this tap to bank trial is developing enhancements to banking processes that many people could benefit from,” comments Marc Lien, Director of Innovation and Digital Development, Llloyds Bank.

“This is one of a raft of new technologies that we’re experimenting with to help our customers.”