Jetco, which operates the cash machines of all banks in Hong Kong and Macau apart from HSBC and 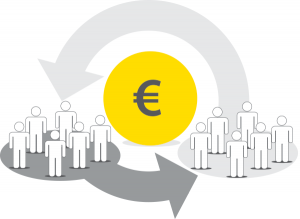 “We want to facilitate the banks to help them handle online and mobile payments,” Choi told the Post.

He said that at present, Hong Kong is “lagging behind” mainland China and developed countries in terms of introducing effective mobile payment and peer-to-peer (P2P) solutions.

P2P mobile payments, by which a user can send money to a friend or merchant using their smartphone, are already hugely popular in mainland China.

In 2014, Chinese mobile payment providers processed more than 6 trillion yuan (US$960 billion), five times the previous year’s total, according to consultancy iResearch. The market is currently dominated by Alipay, which powers Alibaba’s e-commerce platforms Taobao and Tmall, and Tenpay, which is used to process payments through Tencent’s hugely popular mobile messaging app WeChat.

The potential threat posed by Alipay and Tenpay, as well as similar solutions offered by Facebook and Apple, is a major motivation for Hong Kong banks to introduce their own mobile payments system by the end of this year, Choi said.

“Tencent and Alipay are very interested in entering the [Hong Kong] market,” he said. “That is one of the reasons the banks are becoming more aggressive.”

Cheng said that banks did not want to lose the transaction fees they charged on online transfers, “but if they don’t [launch mobile payment solutions] they could lose their market position”.

He predicted that as well as Chinese internet companies, the Hong Kong banks may face competition from Octopus, which is currently used by more than 95% of Hongkongers for contactless payments on the MTR and to merchants around the city and has introduced limited mobile payment features.

In a statement, Octopus said that it was “[continuing] to explore and introduce simple, easy-to-use and diverse Octopus payment channels to customers”.