How much are European merchants paying to accept card payments?

In 2020, a study by CMSPI and Zephyre found that, on average, European merchants were paying more to accept each card payments than they had prior to regulation.1 This significant finding was based on fee increases alone.

However, card fees are only one part of the story; in this article we explore how a shift towards e-commerce, an evolving Merchant Service Charge, and changes to the payments mix have meant that merchants are now battling a rising tide of acceptance costs on multiple fronts writes Martha Southall, Economist at CMSPI.

The shift to online

For European retailers, nothing has been more pivotal – and costly – in the last year than the COVID-19 pandemic. What many merchants did not bargain for, however, is that part of this cost would come from their payments arrangements.

One of COVID-19’s greatest impacts on retail has been to supercharge an already-visible shift towards e-commerce, where average card acceptance fees can be much higher. Merchants operating in the online environment also face a host of additional complexities, including lower approval rates, a more complex and intermediated supply chain, and greater fraud risk.

Each of these serve to increase their cost of accepting payments. However, increasing e-commerce volumes alone are not enough to explain the trend. To understand how average costs could have increased so significantly, European merchants must look to longer-term processes surrounding fees and their overall transaction profile.

Regulation and the cost problem

In 2015, interchange fees – typically the largest component of the Merchant Service Charge (MSC) paid to accept each card payment – were regulated within the European Union.

Interchange Fee Regulation (IFR) capped interchange on domestic and intra-EEA consumer transactions at 0.2% for debit and 0.3% for credit. The legislation represented a landmark victory for merchants across the continent.

How, then, just five years on from the IFR, could the average MSC be higher than it was in 2015?

Whilst the IFR was successful in reducing the average level of interchange, it left all other components of the MSC – plus interchange on commercial cards – unregulated.

Figure 1 shows CMSPI’s modelling of the evolution of the average MSC since interchange regulation. Whilst our data support the success of the IFR in reducing average interchange costs, increases to other fees have more than compensated for this gain. 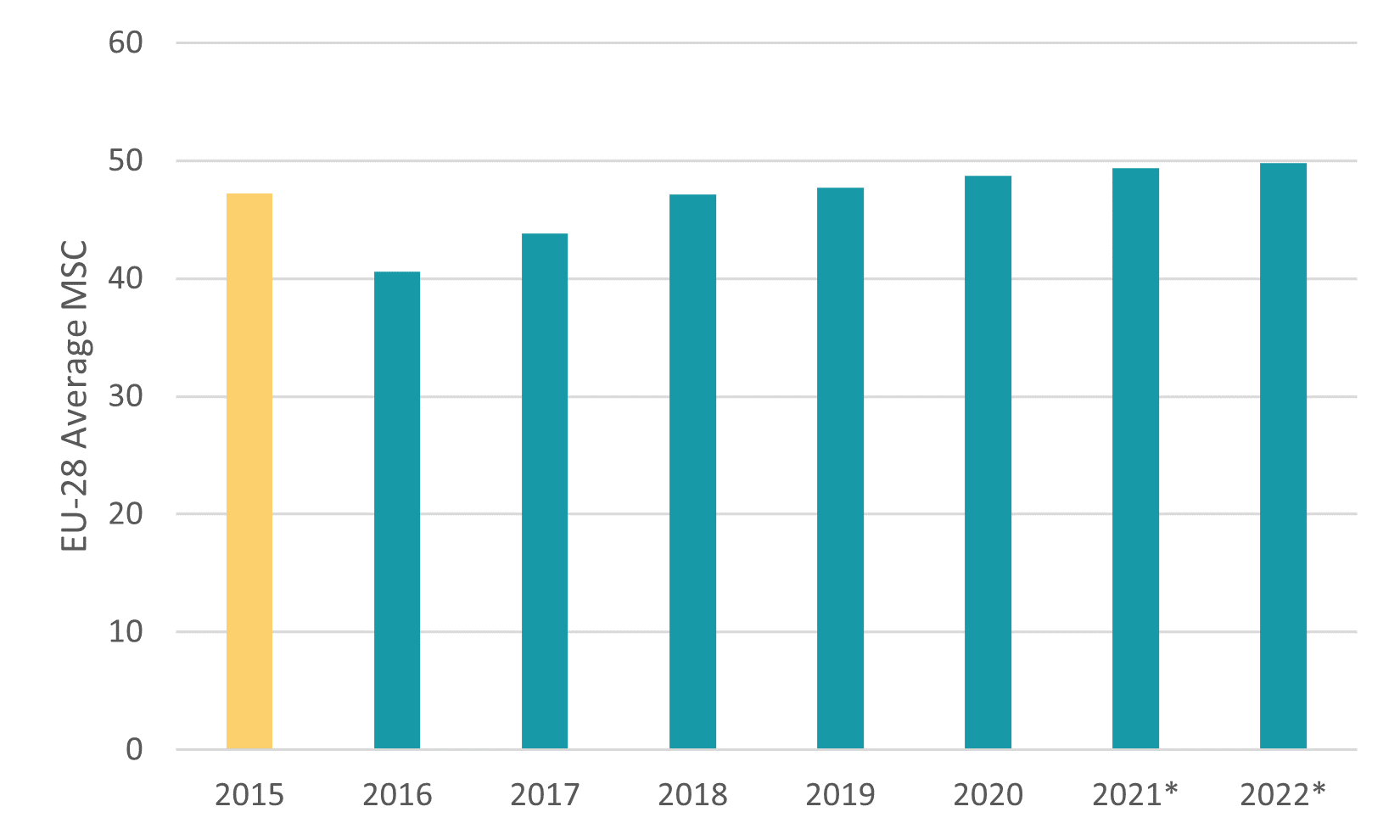 Successive increases to scheme fees have been a key part of this process. In the two years following the IFR, during which the legislation was under review, the global card schemes increased their fees. CMSPI estimates that these changes alone increased European merchants’ annual costs by over €400 million.3

However, after the review period ended in 2017, the rate of fee changes increased dramatically. Since then, CMSPI estimates that new and revised scheme fees have added more than €1 billion to merchants’ annual costs… and counting.

Focusing on card fee increases alone potentially underestimates the problem. Another piece of the cost puzzle lies within the payments mix itself; if merchants see their customers shift away from lower-cost payment methods such as cash and pivot towards more expensive options, then their acceptance costs organically increase despite regulation.

Figure 2 suggests that this process is well underway in Europe. Not only are higher-cost methods such as credit expected to grow significantly between 2020 and 2024, but options that are typically cheaper – particularly debit in many European countries with local schemes – are on the decline.

There is also concern that methods like Buy Now Pay Later (BNPL) could have both effects simultaneously – increasing costs through headline rates of up to 8%, and replacing debit expenditure by targeting credit-averse millennials.

According to CMSPI estimates, increases to unregulated components of the Merchant Service Charge have meant that the average European retailer is paying more than ever to accept card payments.

However, this is only one element in a broader story of rising acceptance costs. The rest is explained by changes to merchants’ transaction profiles, fuelled by shifting consumer preferences and a pandemic that has reshaped shopping behaviour indefinitely.

Merchants faced with this perfect storm must ensure that the manifold fee changes announced for 2021 are passed through correctly, and provide a data-driven business case for the acceptance of any new payment methods. In the long-run, however, only competition-enhancing regulation can truly alter the trend.

1. These numbers have since been updated, as reflected in Figure 1.

3. CMSPI estimates and analysis based on 2019 volumes.

The post How much are European merchants paying to accept card payments? appeared first on Payments Cards & Mobile.