MasterCard says that everyone will be able to pay with their contactless-enabled device for high value payments (above £30 in the UK) at all contactless terminals in Europe by 2017, the company announced last year that contactless would be accepted at every POS across Europe by 2020. 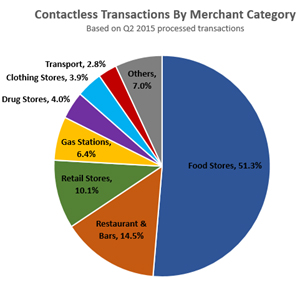 (+£30) contactless transactions by authenticating themselves with their fingerprint or a PIN code on their mobile phone or other device. However, currently this is only available at selected retailers. By 2017 all contactless terminals will be upgraded to allow higher value payments.

In the second quarter of 2015, tap transactions in Europe grew by almost 170% year on year and consumers already using contactless have tapped 20% more. Contactless spend tripled in Europe compared to Q2 2014.  In Q2 2015, half of contactless transactions took place in grocery stores; followed by 14.5% at restaurants and bars, and 10% at general retail stores.

“61% of MasterCard in-store transactions are contactless in the Czech Republic, while similar growth trends are being seen in Poland (41%), in Hungary (27%) and in Slovakia (27%). Every time consumers see the contactless logo, they can use any contactless enabled device whether it’s a card, a mobile phone or another contactless enabled form factor to pay at home but also abroad.”