In 2019, mobile wallets overtook credit cards to become the most widely used payment type globally. In 2020, the COVID-19 pandemic became another accelerant of the continued digitization of the global payments landscape.

While the impact of the pandemic has been pointed to by many as a transformative effect on digital payments, it has merely been an accelerant of the digital payments revolution that has been underway for years. Mobile payments, and more specifically mobile wallets, have been the greatest driver of this revolution on a global basis.

The Mobile Wallets Report 2021 analyses the global mobile payments market in depth, focusing primarily on key developments within mobile wallets, as well as presenting data on how wallets are being used around the world.

The report highlight key growth markets, and the trends driving this growth.

While countries and regions differ greatly in the current status, projected growth, consumer attitudes and more, there are a number of global trends that are worth further exploration.

It’s important to highlight the ways in which developed markets, primarily in North America and Western Europe, differ from the regions which are highlighted in this report.

The card-centric ecosystem, and the related dominance of OEM Pay services such as Apple Pay, Google Pay and Samsung Pay in Western markets has persisted as card payments have reached near ubiquity prior to the digital payments revolution. As such, wallets are almost entirely, card-based.

Card-based wallets are using contactless NFC payments with physical payment terminals that typically also accept card payments. These card-based wallets are increasingly adding express checkout functionality to merchants, so that consumers can use their stored payment and personal details.

Stored Value Mobile Wallets: In the rest of the world, and most notably in the markets covered in this report, payments cards have never reached the level of use that they have in North America and Western Europe.

In many of these markets, cash and cash equivalent payment types are quite popular still today. As a result, mobile wallets have been built outside of the payment card ecosystem, and are increasingly becoming replacements for cash-based payment methods.

These digital, stored value wallets can be funded directly from a bank account, or by other methods, including cash, bulk disbursements or P2P payments. Stored value mobile wallets rely on a multitude of cash in/cash out methods that enable consumers to digitize, transmit, and convert digital cash back into bank notes, when needed.

At the end of 2020, there were over 2.8 billion mobile wallets in use, and it is projected that this number will increase by nearly 74% over the next five years, to reach 4.8 billion by the end of 2025.

The following chart breaks down the contributions of each region globally towards mobile wallet use: 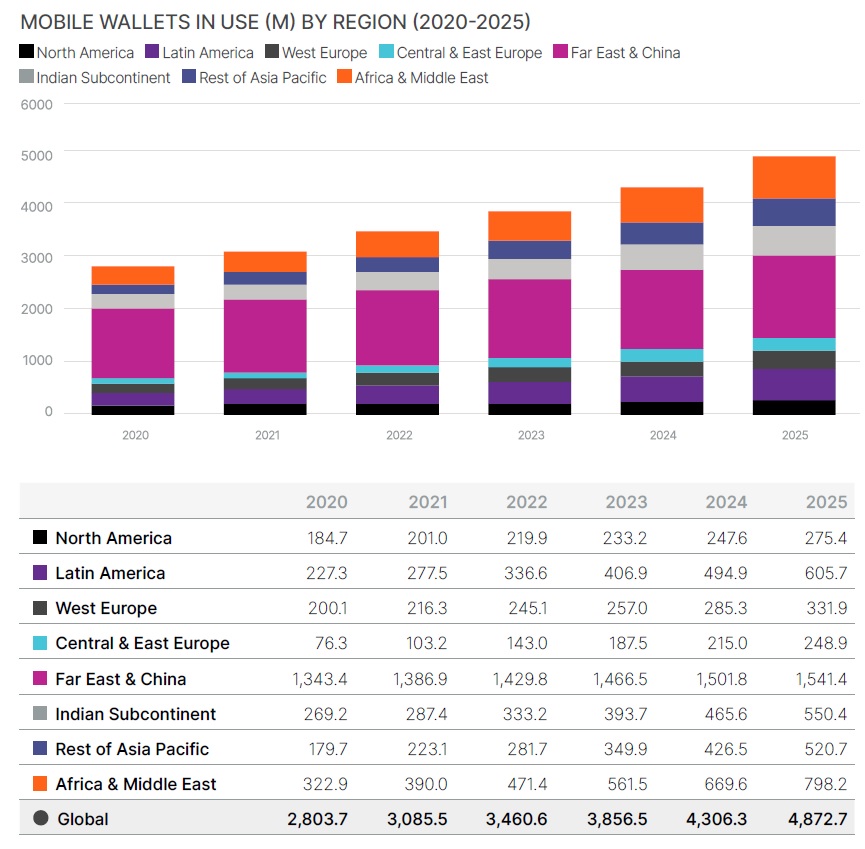 The growth and bifurcation of mobile wallet use presents both an opportunity and challenge for merchants.

The number of mobile wallets transacting over $1 billion per year is set to grow by 27% from 54 wallets in 2020 to 69 wallets by 2025. This provides a lucrative opportunity for merchants looking to acquire valuable customers, many of whom only use mobile wallets.

However, not only are consumers using mobile wallets more, they are using more mobile wallets. Consumers in high growth markets such as India and Indonesia use an average of 2.74 wallets.

This means that not only do merchants need to accept wallets but they need to ensure broad coverage across each target market.

The post Half of the world’s population will use mobile wallets by 2025 appeared first on Payments Cards & Mobile.