The good news is based around three small letters, but culminates in the entire industry breathing a collective sigh of relief: NFC.

As we are all aware, NFC has long been the poster boy for getting the payments credentials off the “old school” plastic onto our new shiny phones allowing consumers to do many things from pairing devices, passing on contacts, following tourist trails around cities – but more important to the readers of this – allow payments to be facilitated through the handset at POS.

Smartphone handsets sales skyrocketed through the 1 billion sold mark in 2014 and are predicted to hit 1.25 billion worldwide in 2015, far outstripping the sales of any other type of computer.

However, the interesting story which lies behind this incredible growth is the number of handsets being shipped with NFC.

Shipments of NFC-enabled handset are projected to increase to 756 million in 2015, up from 444 million in 2014, according to latest research from IHS Technology and payment are believed to have been the driving application for NFC over the last seven years. Payment, the report notes, is one of the few globally interoperable applications where there is contactless acceptance which is being installed.

Android will of course be the largest segment for NFC-enabled smartphones in the forecast period, with Samsung’s Galaxy range of smartphones driving growth of the segment. 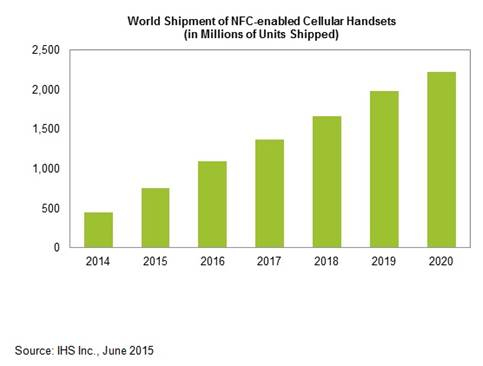 However, despite the dominance of Samsung in the market and the impending launch of Samsung Pay, not to mention the competing Android Pay and Google Wallet, it is once again Apple who have driven the hearts and minds of the world grabbing all the attention with its launch of Apple Pay.

Apple’s ability to dominate the dialogue in NFC is, in fact, staggering. Despite the millions of dollars spent by the likes of Visa, MasterCard and American Express in promoting the technology the question that has dominated has always been, “What will Apple do?” In fact, the collective sigh of relief from around the payments world when Apple did join the NFC party was palpable.

Since then the commentary with regards NFC and HCE has been off the scale, the pent up marketing teams within all the payments ecosystem have released ream after ream of PR, webinars, white papers and more on the subject and all because, as one guy said to his friend at the airport in Las Vagas as I was leaving Money2020 last year, “Did you know that Apple invented this thing called NFC.”

While the card networks and the entire payments ecosystem hide the grimace on their face as they read that last, true comment, the reality is, if it was Apple or indeed anyone else from inside or outside the payments industry that brought the world’s attention to this very cool technology, who cares?

NFC is now deeply entrenched in the minds of consumers. Well, at least in certain hotspots around the globe like USA, Canada, UK, France, Spain to name a few – but that list is growing. And fast.

The question which now sits on the minds of consumers, especially in the UK, is “Why can’t I do this with my phone?”

For a bit of background on the UK market, the latest data from Visa Europe shows that uptake of contactless payments in Europe continues to climb with over 1 billion transactions made in the last 12 months.  Figures also show that Visa cardholders spent €1.6 billion in the month of March 2015 alone – an astonishing three-fold increase when compared to the same period in 2014.

Since the ability to use bank issued contactless cards on Transport for London, which includes all busses, trains and the underground, the UK has gone contactless crazy. Similarly, mobile banking by smartphone and tablet has become the leading way customers manage their finances, as mobile banking overtakes branches and the internet as the most popular way to bank.

So. The UK loves banking by mobile phone and contactless…I wonder what the next step could be?

Cue, you guessed it, Apple. According to press reports, private documents belonging to one of the biggest retailers in the UK reveal that Apple Pay will be coming to UK stores on the 14th July. The leaked memos reveal that Apple Pay will only be available for Apple customers that own an iPhone 6 or an Apple Watch, but I can tell you, as soon as people begin to see their fellow passengers tapping that iPhone to pay and go through the turnstiles of the underground there will be a ground swell in demand for the same service – be it Samsung, Apple or any other handset manufacturer.

The work done by the payments industry thus far in terminalisation and issuance of NFC should be applauded. But let us not forget that without the support of the handset manufacturers we would all still be waiting for the eternal 3-5 year business case that rolled on for what seemed like a life time.

NFC is embedded and here to stay, that is good news indeed. The unintended consequence of how it will become utterly and undeniably entrenched in our lives is through the righteous marriage with the handset. Damn, payments got cool.