5G has gained significant traction over the past year and is now live in 24 markets worldwide, supported by an expanding roster of 5G devices and growing awareness among consumers. According to the 2020 global edition of the GSMA’s flagship Mobile Economy report series, 46 operators in 24 markets had launched commercially available 5G networks by 30 January 2020. One in five mobile connections is forecast to be running on 5G networks by 2025[1].

“The mobile operator worldwide investment forecast will be more than a trillion dollars over the coming years, focused on rolling out advanced networks to serve both consumer and enterprise customers,” explains Mats Granryd, Director General of the GSMA. “Over the last 12 months we have seen the 5G ‘hype’ make way for reality: millions of consumers are already migrating to 5G, while enterprises are beginning to embrace 5G-enabled network slicing, edge computing and low-latency services.”

The new report reveals that:

5G has arrived – but 4G is still king: 4G was the world’s dominant mobile technology last year, supporting more than half (52%) of global connections. Despite the emergence of 5G, 4G will continue to grow over the coming years, increasing to account for 56% of connections by 2025.

The industry is investing heavily in 5G: Mobile operators are expected to spend $1.1 trillion worldwide between 2020 and 2025 in mobile CAPEX, roughly 80% of which will be on 5G networks.

The smartphone is becoming ubiquitous: Smartphones are forecast to account for four of every five connections by 2025, up from 65% in 2019.

IoT will be an integral part of the 5G era: Between 2019 and 2025, the number of global IoT connections will more than double to almost 25 billion, while global IoT revenue will more than triple to $1.1 trillion.

Subscriber growth is slowing, but the industry still has people to connect: The number of unique mobile subscribers[2] at the end of last year stood at 5.2 billion (67% of the population) and is forecast to grow to 5.8 billion by 2025 (70%).

Half the planet connected to the mobile internet: Almost half of the global population (3.8 billion people) are now mobile internet users, forecast to reach 61% (5 billion) by 2025.

5G to add $2.2 trillion to the global economy over next 14 Years

According to the report, mobile technologies and services generated 4.7% of GDP globally last year, a contribution that amounted to $4.1 trillion of economic value added[3]. This contribution is forecast to grow to $4.9 trillion (4.9% of GDP) by 2024 as countries around the globe increasingly benefit from the improvements in productivity and efficiency brought about by increased take-up of mobile services. The mobile ecosystem also supported more than 30 million jobs in 2019 (directly and indirectly). It made a substantial contribution to the funding of the public sector, with $490 billion raised through general taxation.

5G is forecast to contribute $2.2 trillion to the global economy by 2034, with key industries such as manufacturing, utilities, and professional and financial services benefiting the most from the new technology. 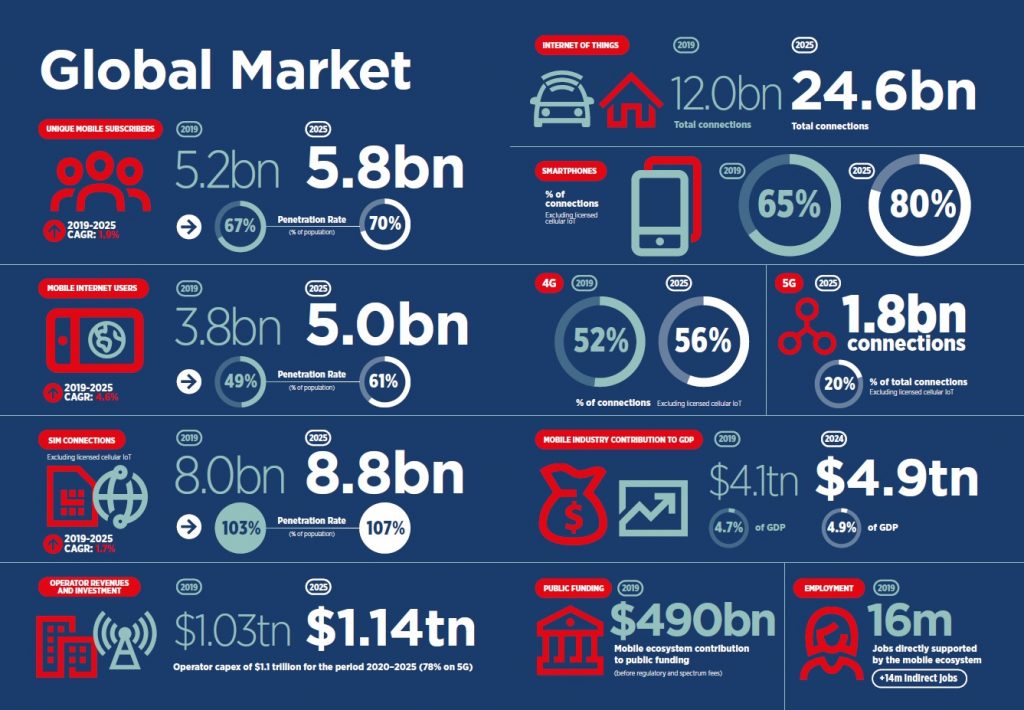 The post Global mobile economy valued at $4.9 trillion by 2024 as 5G ramps up appeared first on Payments Cards & Mobile.