Payment cards were used for purchases with a value of $25.1 trillion worldwide in 2017, an increase of 13% on the year before. 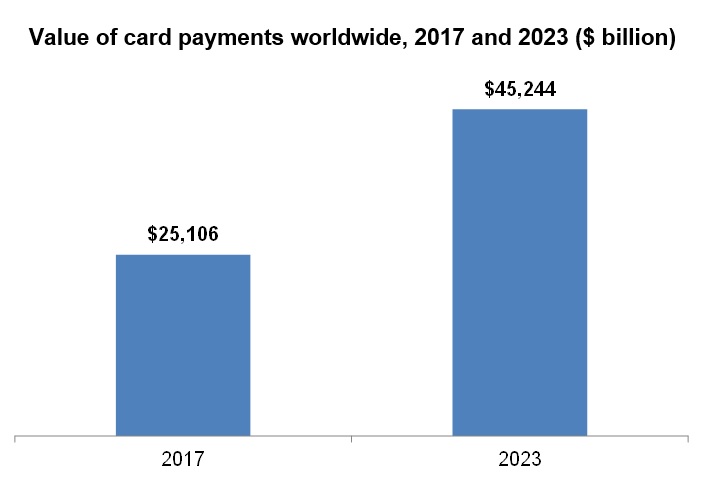 Although card expenditure is growing strongly, it is being outpaced by growth in the number of payments, as cards are increasingly being used for lower-value payments, often displacing cash in smaller retailers for goods such as drinks and snacks.

RBR’s Global Payment Cards Data and Forecasts says global card expenditure will grow at an average of 10% per year between 2017 and 2023 to reach $45.2 trillion.

The average value of a payment, however, will fall from $67 to $62 over the same period as the influence of contactless cards grows – the latter are typically used for the lowest-value payments, and particularly those which would previously have been made with cash.

Both customers and merchants appreciate the convenience of contactless payments, partly because the need to enter a PIN is removed, but also because transactions are much quicker.

According to the research, Asia-Pacific accounts for 50% of global card expenditure, which is much higher than its 28% share of the number of payments. The main reason for this is that in China, cards tend to be used for cash withdrawals rather than payments, and when they are used at POS, it is typically for high-value purchases such as property deposits and vehicles.

The report shows that debit cards account for 55% of spending on cards worldwide, some way below their share of the number of payments. This is because debit cards are most commonly used for low-value purchases, whereas credit cards are usually used for more expensive items. As the influence of contactless grows, debit cards’ share of global card expenditure will continue to fall.

The value of card payments worldwide will doubtless continue to rise, but the average value of a payment will keep falling.

“Consumers worldwide are becoming more comfortable with using their cards for inexpensive goods, especially as contactless cards become commonplace,” says Daniel Dawson, who led the research project. “As they increasingly expect to be able to use contactless cards across the board, the average value of a payment will continue to fall.”