Unauthorised financial fraud losses across payment cards, remote banking and cheques totalled £844.8 million in 2018, an increase of 16 per cent compared to 2017. Banks and card companies prevented £1.66 billion in unauthorised fraud in 2018.

This represents incidents that were detected and prevented by firms and is equivalent to £2 in every £3 of attempted fraud being stopped. In addition to this, in 2018 UK Finance members reported 84,624 incidents of authorised push payment scams with gross losses of £354.3 million.

A total of £1.12 billion in card fraud was stopped by banks and card companies in 2018, a rise of 14% on 2017. This is equivalent to £6.27 in every £10 of attempted card fraud being prevented. These figures cover fraud on debit, credit, charge and ATM only cards issued in the UK.

Victims of unauthorised payment card fraud are legally protected against losses. Industry analysis indicates that banks and card companies refund customers in over 98% of cases. 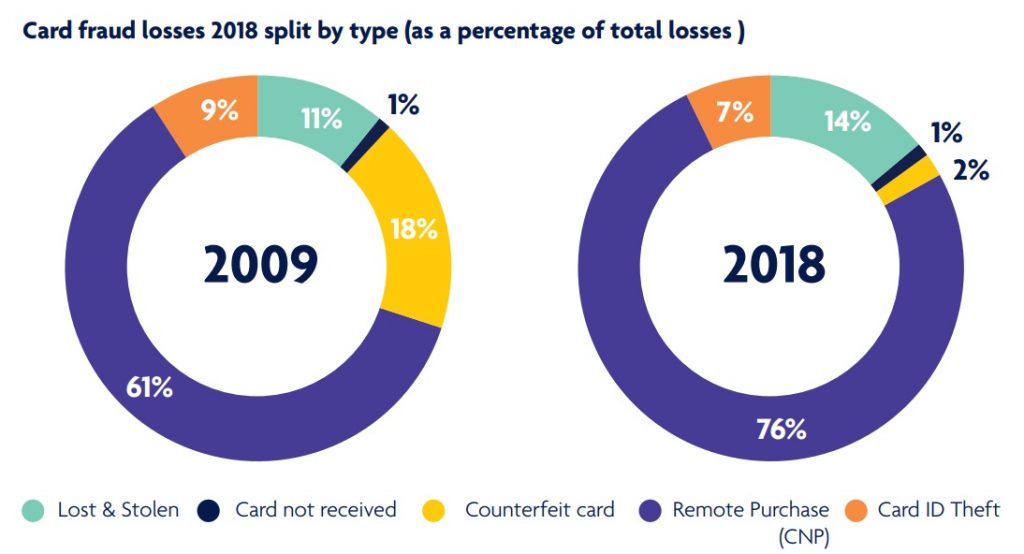 Mail and telephone order (MOTO) fraud against retailers based in the UK also increased, rising 14 per cent to £92.1 million. While the number of cases of remote purchase fraud increased by 47 per cent in 2018, the gross loss rose by the lower level of 24%, suggesting that card issuers are identifying and stopping individual incidents more quickly.

Losses due to lost and stolen fraud rose by 2% in 2018 to £95.1 million. The number of incidents increased by 24% during the same period, resulting in a lower average loss per individual case. This reflects that bank systems are detecting fraudulent spending more quickly, combined with the £30 limit on individual contactless transactions.

Each contactless card also has an inbuilt security feature, which means from time to time cardholders making a contactless transaction will be asked to enter their PIN to prove they are in possession of their card. The frequency of this will vary between card issuers.