Electronic payments grow faster than GDP across all regions

Electronic payments volumes are expected to continue to grow strongly in 2014, according to the World Payments Report 2015 from Capgemini/Royal Bank of Scotland. Volumes are projected to grow at a rate of 8.9% to reach a record high of 389.7 billion transactions, spurred by economic recovery in mature markets, expansion in China and the adoption of digital technologies and immediate payment schemes.

Emerging Asian countries are driving the growth in non-cash, particularly China which is expected to move into fourth place behind the US, Europe and Brazil in terms of non-cash payments. The rising penetration of mobile phones in smaller Chinese towns and cities is resulting in increased mobile payments — 4.5 billion in 2014, up 170%. Steps taken by the Chinese regulatory authorities to accelerate the deployment of point-of-sale equipment to merchants and to open the domestic card payments to competition have also increased non-cash payments.

Growth occurred in all non-cash payment methods globally, except cheques which declined 10.9%. The share of non-cash transactions made via cards grew to 62.8% in 2013, up from 60.9% in 2012. Although growth in debit card payments globally slowed in 2013, this payment method still remains the most used of all non-cash methods. Debit card usage in the US bucked the trend by increasing by 8.3% in 2013. A total of 61 billion debit card transactions were made in the US, dwarfing Europe, the second largest market, with 34 billion payments. 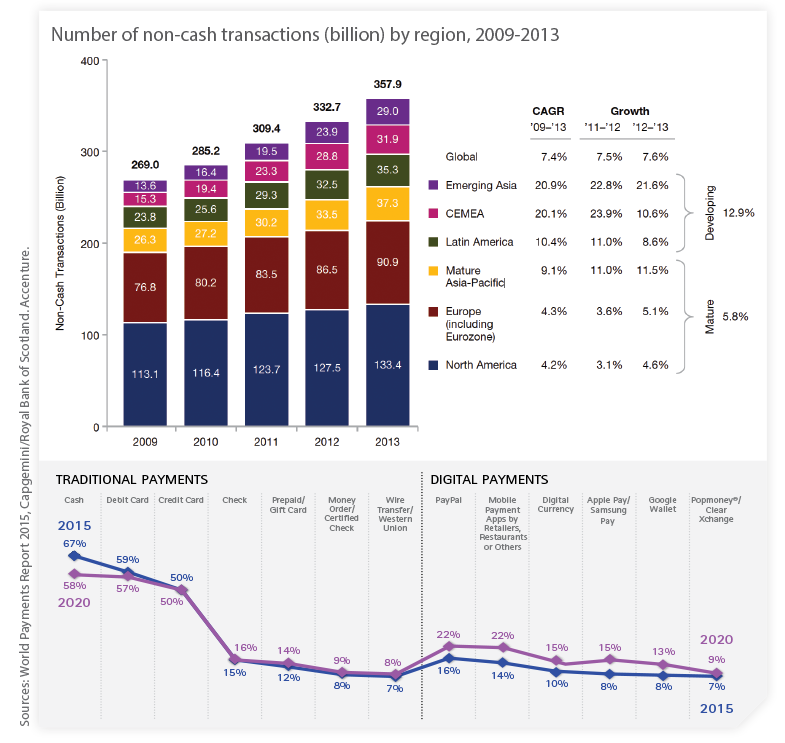 The growth rate of credit cards remained steady at 9.6 percent, despite a decline in growth in Latin America from 18.2% in 2012 to 10% in 2013. There were 69 billion credit card payments in 2013, and these are expected to grow in the US and Europe as their respective economies recover.

Payments processed through non-bank systems, which the report refers to as ‘hidden payments’, were estimated to have reached 24-40 billion in 2014. This would make them around 10% of non-cash payments, at the upper end of this range. ‘Hidden payments’ include those made through closed loop cards, mobile apps, digital wallets, mobile money and virtual currencies. The growing level of ‘hidden payments’ is a disintermediation threat for banks and those within the financial services industry. There are also wider implications for regulators and consumers around some elements of these payment methods. This includes dispute resolution, consumer protection, information security, privacy, fraud and anti-money laundering provisions.

Despite the rise of challengers and new market entrants, the report feels that banks are perhaps better positioned than their rivals to offer holistic solutions. Banks are able to operate across various payment methods and channels to offer customer-centric innovations. This makes them a consolidated provider for consumers and businesses, as opposed to customers having separate relationships with multiple parties depending on the payment scenario. Banks are also strongly placed to develop innovative offerings based on existing infrastructure, such as immediate payments, to differentiate themselves from other PSPs.