For the first time, e-commerce in Germany, Austria and Switzerland (known as the DACH region) reached a consolidated volume of more than €100 billion. The German-speaking e-commerce markets are now generating more sales than any other language area in Europe.

In Germany, Austria and Switzerland, the average order per capita was around €1,000 a year. That’s significantly more than in France, as an example, but still considerably less than in the UK.

In terms of percentages, last year’s growth of the e-commerce market was strongest in Switzerland, with an increase of 27.9% compared to 2019. This DACH country is followed by Austria (+17.4%) and Germany (+14.6%). The e-commerce share in retail continues to rise steadily in all three markets.

The analysis was conducted by the e-commerce associations from Germany, Austria and Switzerland, which compared the national figures to shine a new light on e-commerce in the DACH region.

Last year, consumers in Switzerland bought goods with a total value of €11.84 billion. This means that online sales in this Central European country have double within six years. Also last year, e-commerce in Austria was worth more than €8.5 billion.


An interesting statistic from this country is that the online turnover generated through mobile devices has increased by more than 50%. In Germany, online sales were worth €83.3 billion euros last year.

While the fashion segment in Germany was able to expand its gap to the formerly leading home electronics (brown and white goods as well as telecommunications) despite the initial weakness, the opposite effect has occurred in Switzerland.

Once again, significantly more orders were placed online in the home electronics category in Switzerland.

A sales volume of over CHF 3 billion (+48%) makes this area the most popular online retail range in terms of sales. In Germany, the corresponding product ranges reached a consolidated volume of €20.5 billion, 12.6% more than a year earlier. 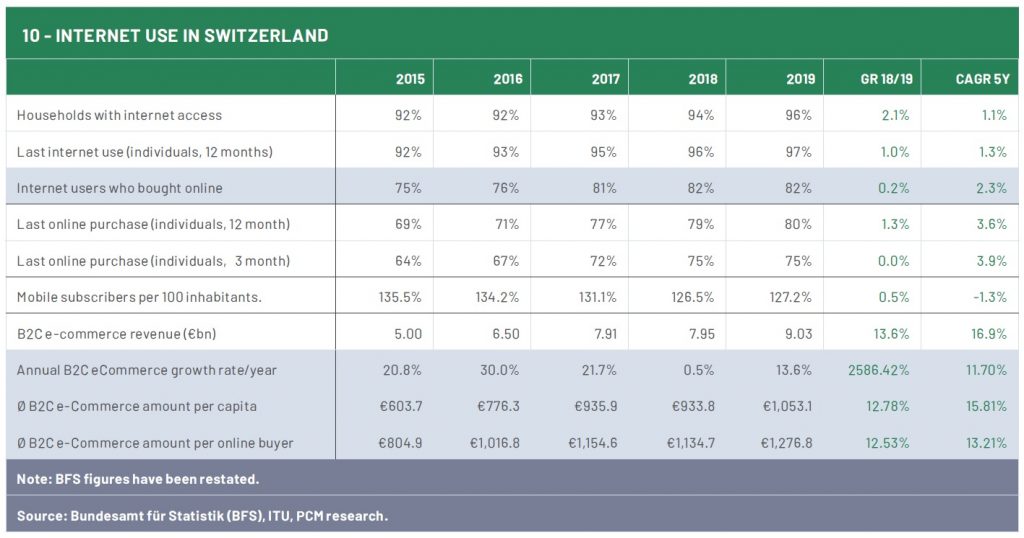 Last year, all countries were hit by the corona virus pandemic. This led to a boost to online grocery shopping. In Switzerland, €1.5 billion was generated through online sales of groceries, in Germany this industry was worth €2.3 billion and in Austria just €63 million.

Per capita, €33 were spent online on groceries in Germany, while in the other two DACH countries, the average expenditure was much higher: €175 in Switzerland, and €78 in Austria.

Another interesting finding from the comparison study is that large online pure players in Switzerland continued to achieve growth rates of up to 50%. And in Germany, almost every second euro spent last year was made on online marketplaces and platforms.

“Online retailing in Switzerland made a three-year leap in 2020. We are positively impressed by the way retailers and downstream deliveries have been able to provide such services at a high level for months”, says Patrick Kessler, Managing Director of HANDELSVERBAND.swiss.

“Even during the Christmas season everything worked almost perfectly. It was interesting to see that in particular Omni-channel providers were able to absorb growth rates of a factor of 5 to 10 during the closure phases.”