Covid-19 report: A ‘levelling up’ in European e-commerce

It’s commonly understood that the recent pandemic saw e-commerce grow across Europe. However, analysts at RetailX claim that growth in markets with lower internet penetration and fewer digital shoppers was far higher than in more developed markets.

Their new European E-Commerce Report says that when it comes to first-time purchasers, growth in Europe’s “big five” – the UK, Germany, France, Italy and Spain – was far lower than in Eastern and Southern European markets.

Eschewing the hype about acceleration and revolutions, RetailX’s report shows that European e-commerce performed more or less to trend over the course of the pandemic, with a slight uptick – perhaps 1% – higher than trend in terms of internet penetration and those shopping online.

The biggest change came in e-commerce volumes, meaning that those who were already purchasing over the internet did much more of it. Another significant shift was the growth in internet penetration and usage in those markets with lower e-commerce figures before the pandemic.

“As the dust settles, it’s clear that internet use grew at not much more than trend rate during the pandemic.”

In North Macedonia, for instance, internet penetration and online spending grew at more than double the rate seen in developed markets such as Sweden or the UK. 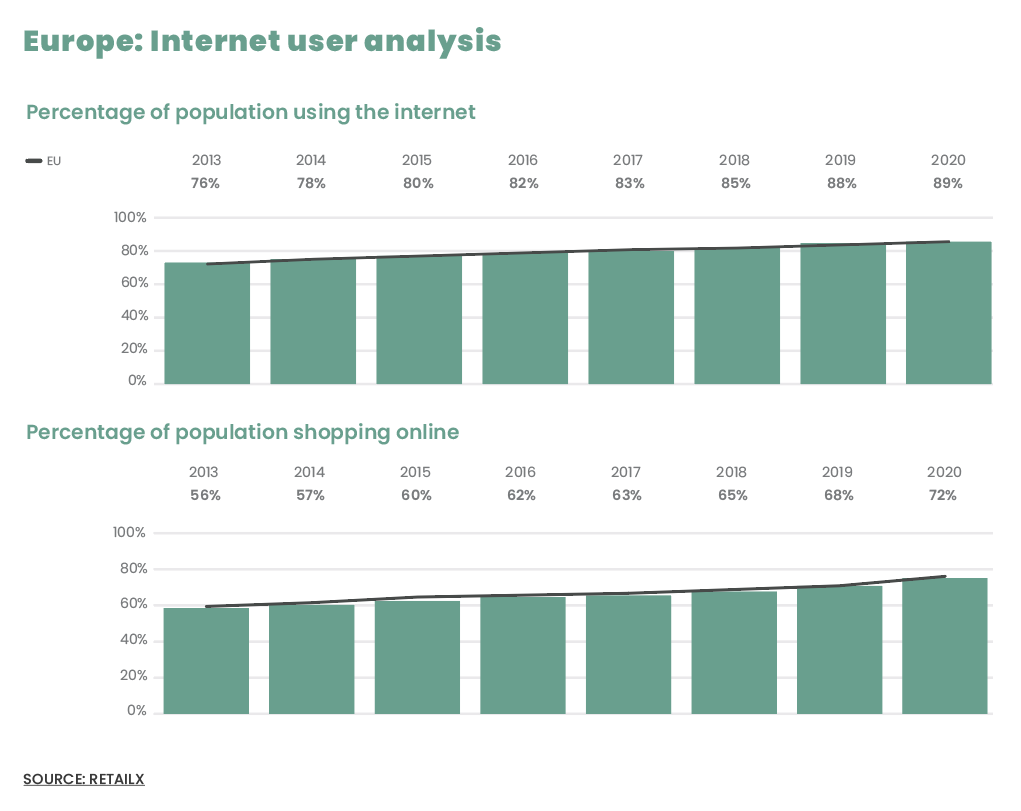 If the numerical growth in e-commerce users and internet penetration is less wild than previously hyped, then COVID-19 has at least revealed some structural anomalies in how Europeans buy online.

As one of the world’s first regions to adopt the internet, a majority of European still shop using desktop computers –
a very different scenario from developing markets in Africa, Asia and Latin America, where nearly 93% of consumers shop using mobile devices.

“Some Western European markets barely make top-quartile when it comes to overall e-business readiness, including ease of doing business online and logistics.”

More broadly, RetailX’s report surprises with the news that many Western European markets barely qualify for world top quartile performance in overall internet readiness, while economies in Central Europe scrape in to the world top 50 by certain measures.

RetailX consider factors such as e-government development (Germany is ranked 25th) and a developed home delivery network (Ireland falls outside the top 25 at 29).

Only the UK, Sweden and Denmark are ranked among the global top ten markets for overall internet readiness. In Central Europe, only Poland and Switzerland make the top 25, while Spain and Italy represent for Southern Europe.

The RetailX report takes a longer-term view of the impact of COVID-19 on e-business, and the results are valuable.

Those shopping online have dramatically increased their use of e-commerce; however, there’s also a growing “digital divide” between internet-literate populations within countries on the one hand, and 15 percent of the population not connected to the internet on the other.

The concept that COVID-19 has “levelled up” the use of e-commerce between Europe’s well-developed and developing economies is also valuable, and their evaluation of overall e-business readiness credible.

This report suggests more needs to be done across the board in Europe to open markets to digital businesses, with just two Western European economies making the global top ten for overall e-business readiness.

The post Covid-19 report: A ‘levelling up’ in European e-commerce appeared first on Payments Cards & Mobile.