Contactless cards are consumers tool of choice for low-value payments

Contactless cards will account for 57% of payment cards worldwide by 2023 as issuers increasingly offer them as standard, and acceptance grows to reflect customer demand.

Research from RBR shows that issuers across the world are increasingly adding contactless functionality to their payment cards, often as a way of persuading their customers to use cards rather than cash. 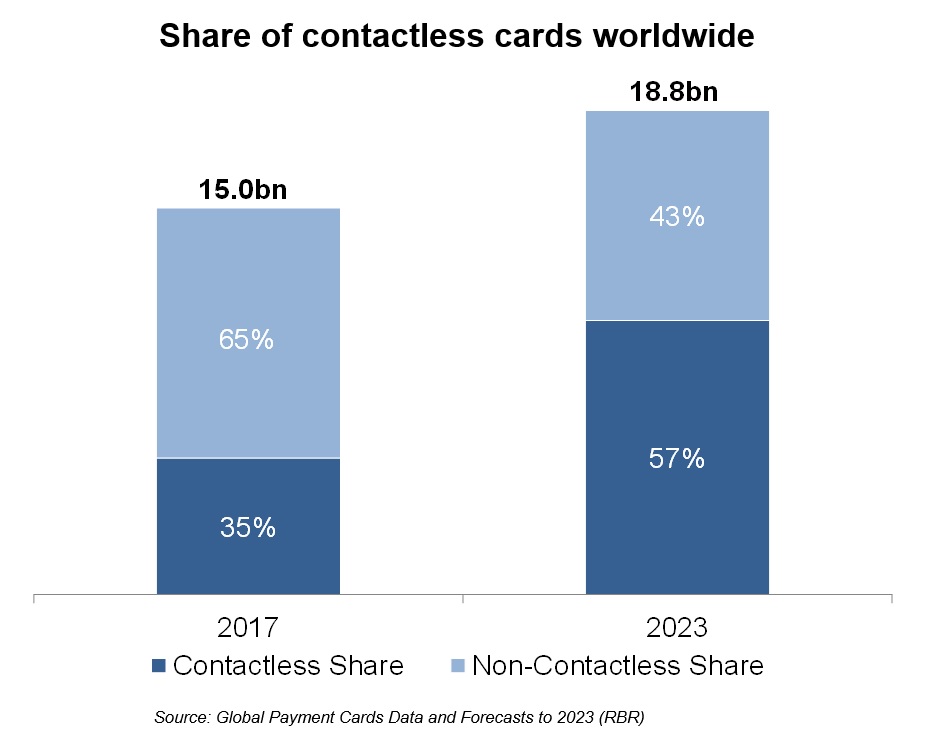 At the end of 2017, there were 5.3 billion contactless cards in circulation worldwide – this represents 35% of all cards, a share that forecasts show will increase to 57% by 2023, as banks will continue to convert existing cards to contactless while also providing this functionality as standard with newly-issued cards.

In China, the world’s largest contactless market, the central bank has mandated that all newly-issued cards must be chip cards with contactless functionality.

Contactless payments not yet commonplace everywhere

Cardholders are encouraged to use these cards, rather than cash, by advertising campaigns which highlight the speed and convenience of contactless, especially in merchant outlets which sell low‑value products such as drinks and snacks. The number of contactless card payments worldwide increased by 88% in 2017.

Contactless payments are now commonplace in some regions, most notably in European markets such as Sweden and Denmark, where cards have long been established as the payment instrument of choice at POS, and contactless was the logical next step.

In markets such as Hungary and Poland, contactless was adopted early, and customers have had time to become familiar with the technology.

Contactless usage is less common in the Middle East and Africa and Asia-Pacific, where debit cards tend to be used for cash withdrawals rather than payments.

Contactless acceptance grows on back of merchant and consumer demand

Acceptance of contactless cards is becoming more common – the number of EFTPOS terminals worldwide which allow contactless payments rose by 41% in 2017 to reach 40.9 million.

Merchants and consumers are driving this growth; merchants welcome the reduction in queues which results from the speedier contactless payments, and consumers increasingly expect to be able to use contactless cards in most outlets.

Specifically in Europe, contactless acceptance is also driven by Visa and Mastercard mandates which require all EFTPOS terminals to be contactless by 2020.

“Contactless issuance and usage will grow strongly as consumers and merchants see the benefits of the technology in terms of speed and convenience. As contactless cards become a part of everyday life across the globe, their acceptance and use will become the norm in the vast majority of countries,” concludes Daniel Dawson, RBR’ research.