RBR research shows that the number of contactless card purchases increased by 36% in 2020. Many hygiene-conscious consumers gravitated towards contactless payment methods during the pandemic to minimise contact with EFTPOS terminals — this was also widely encouraged by businesses and retailers. 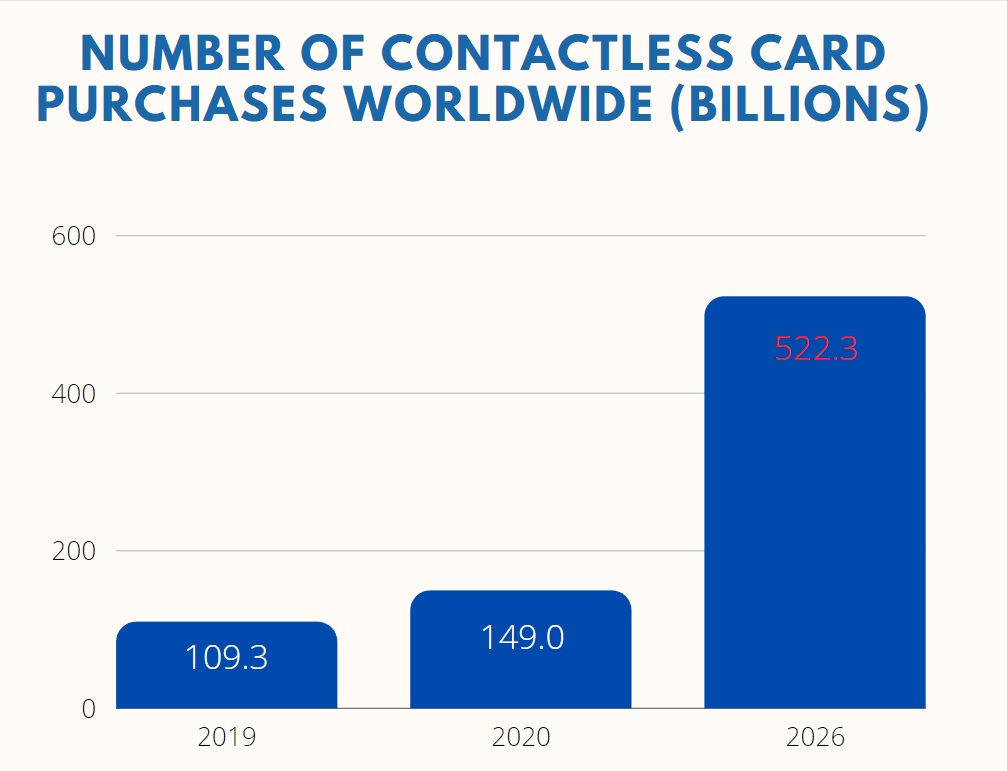 Governments took note of this trend and several countries, including the UK, the Czech Republic and the Netherlands, raised the limit for payments without PIN, facilitating contactless spending further.

High levels of growth will continue, with RBR forecasting that the number of contactless card purchases will increase by 23% per year on average, reaching over 500 billion by 2026.

Some regulators and financial institutions view contactless technology as key in advancing the shift away from cash. Consumers are already choosing to use contactless cards for many low-value, everyday purchases they would have previously made with cash.

In China, the central bank has mandated that all new cards must be issued as contactless to expedite uptake of cashless payments.

The research reveals that contactless card usage is most established in Europe, which sees the highest average number of contactless purchases per card.

Countries such as Ukraine which have particularly high levels of card tokenisation and mobile wallet usage have the most active contactless card users.

Contactless cards will expand their reach

Contactless rollout will accelerate in all 65 countries covered in the study, with 81% of all cards forecast to be contactless in 2026. The fastest growth in contactless cards will be in the Americas.

Issuance had previously been slow in many countries in this region, but the picture changed in 2020 when Brazil and Mexico both saw contactless card numbers almost triple as both banks and FinTechs ramped up their activity.

Contactless cards may, however, struggle to gain momentum in countries with established alternative contactless payment methods, such as Indonesia where QR code payments are widely used and contactless card uptake has so far been sluggish.

International card schemes are considering mandates for issuance of their cards as contactless to tackle such obstacles.

“Issuers got the message quickly during the pandemic that demand for contactless was increasing as customer habits changed,” says Daniel Dawson, who led RBR.

“In 2020, contactless cards got the extra push they needed to extend their reach across customer segments and regions, a trend that will only continue with time.”