The UK’s Co-op is continuing to make changes in-store with the rollout of more cashierless technology into more convenient stores as cash-use continues to drop. 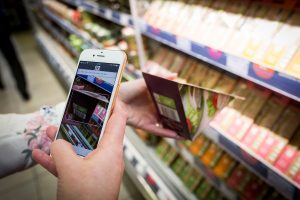 The retailer is extending its pay-in-aisle technology trial, with time-pressed shoppers able to access the easy to use App on their phones and devices in over 30 Co-op food stores across England, Scotland and Wales by late August.

While cash remains common-place in convenience stores, Co-op has seen a more than 10% decline in the popularity of notes and coins during the last two years. The use of contactless, cards and other payment methods now accounts for more than one in two transactions.

The Co-op has extended its pay-in-aisle trial after first unveiling the in-store technology in early 2018. The technology sits along existing payment methods – including cashiers and self-scan tills – to provide added choice, speed, ease and convenience, especially at busier times.

The App enables customers to scan products on their own device as they walk around the store, with the cost of the shop deducted from their Apple or Google Pay account with the touch of a button.

It also integrates the benefits of Co-op Membership – where Members receive a 5% reward on the purchase of own brand products, and the Co-op donates a further 1% to local causes.

“Technology is bringing unprecedented levels of change to retailing, with speed and ease key drivers for time-pressed consumers. We know that people adopt technology at different speeds, and while cash is here to stay it is clear that it is increasingly playing a lesser role in society,” explains Mark Pettigrew, Director of Retail Support, Co-op food.

“Retailers need to adapt and be agile, and this App builds added choice and convenience into the retail experience for our members and customers, while appealing to new shoppers.

People lead busy lives and, shoppers value their time. Whether it’s a train to catch or on the school run this technology cuts queues and saves time. It can give our stores increased opportunity to replenish stock and increase product availability so we are at our best even at our busiest times, and enables customers to complete their shopping quickly and get on with the rest of their day and what matters most to them.”