According to “The Value of Cash on the UK High Street” survey, published by independent ATM operator Cardtronics UK and conducted by market research firm Populus, the vast majority of Brits still prefer the high street over any other shopping environment. 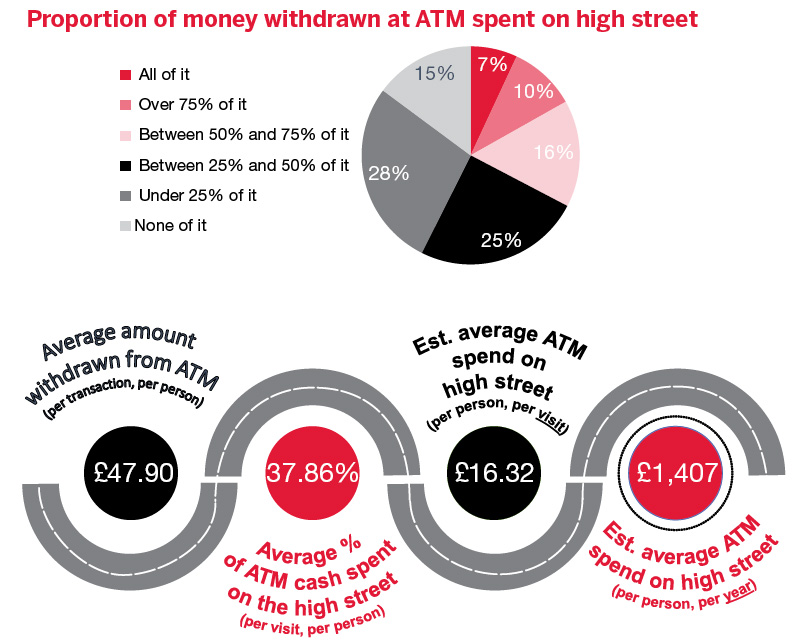 Proportion of money withdrawn at ATM spent on high street

On average, UK consumers visit more than once a week (77 times per year) and spend £26 per trip. The main drivers for their frequent visits reach from the convenient shopping experience through to the fact that high streets are often a focal point for local community life.

Although the high street remains the heartland of British shopping culture, its face is continuously changing and evolving. The payments landscape is one of the most influential variables in this equation.

The data shows that today card payment options are available at virtually all shopping tills of SME high street retailers. However, these payment options come at a cost: stores spend 2% of their annual turnover on offering non-cash payments. On the consumer side, Brits prefer cash over cards for purchases below £17, which explains why half of the turnover at high street retailers is generated through cash payments. These payments are enabled by local ATMs, which directly account for £36bn of the annual high street economy.

With an increasing rate of new technology being introduced, investments in new forms of payments are no guaranteed success for retailers: only 30% state that their investments in the last two years have had a positive effect on their business performance.

However, the pressure to invest in new technology is high. Further headwinds stem from closing bank branches, which cause a quarter of affected retailers to observe a decline in footfall in their stores, and 24% suffer from dwindling profits because of decreasing cash access on their high streets.

This is mirrored in the consumer data, which shows that up to 11.7m Brits will abandon their high street if they are not offered the convenience of withdrawing money and shopping at the same time.

However, in light of these pressures many stores extend their in-store offering through partnerships with independent providers of financial services in order to fill the void left behind by closing bank branches. Almost half (42%) of retailers already observe that businesses on their high street have started offering ATM services in the wake of bank closures, and 16% have even witnessed the arrival of additional financial advice and mortgage services.

Tim Halford, Commercial Director of Cardtronics UK, said: “The report showcases the rising importance of the partnerships between high street retailers and alternative providers of financial services. Retailers fight to stay afloat, but a range of pressures still stifle their efforts: they range from ever changing trends in new payment technologies, to the retreat of local banks through to separate business rates on many retail ATMs. As such, it is now more important than ever that we rally to support the high street as the UK’s prime local retail hub.”