As companies globally race to position themselves in the swap of physical wallets and plastic cards for virtual ones, Canada’s largest telcos unveiled the grand expansion of their mobile payments app – Suretap. 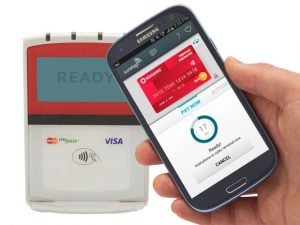 venture with Bell, Telus, Koodo and Virgin. The wallet is now available to customers of all the operators on more than 30 NFC-enabled Android and BlackBerry handsets.

The biggest challenge in getting the expanded app – in production for the past nine months – to stand on its own was getting the slew of moving parts on the same page at the same time, said Jeppe Dorff, the president of Suretap.

When Suretap was first released last year, it was a closed wallet with limited application. It could have been used to pay for everyday purchases where contactless payments were accepted on select devices connected only to the wireless network of Rogers Communications Inc. Only two credit cards from issuer Rogers Bank and gift cards to a handful of retailers could have been installed on the digital application and used in stores.

This release broadens the carrier support for Suretap to five, adding both the main and flanker brands of BCE and Telus, including Bell, Virgin, Telus and Koodo. CIBC, which also has its own mobile payments app, will offer Suretap users access to its complete credit card portfolio and more retailers such as Forever 21 and Groupon have signed on as well, bringing the total to 38 credit cards and 30 gift cards.

“It made sense to let’s say make sure there’s an application that’s good for the consumer, that the consumer can access irrespective of what carrier they’re on, or what bank they’re with, or what retailer they want to engage with,” said Dorff. “It avoids confusion and drives adoption.”