Over the last couple of days there have been numerous reports around extravagant card scheme fees paid to the major payment networks, retailers had to spend more than £1 billion last year to accept payments from customers, prompting calls for the government to tackle excessive card costs. 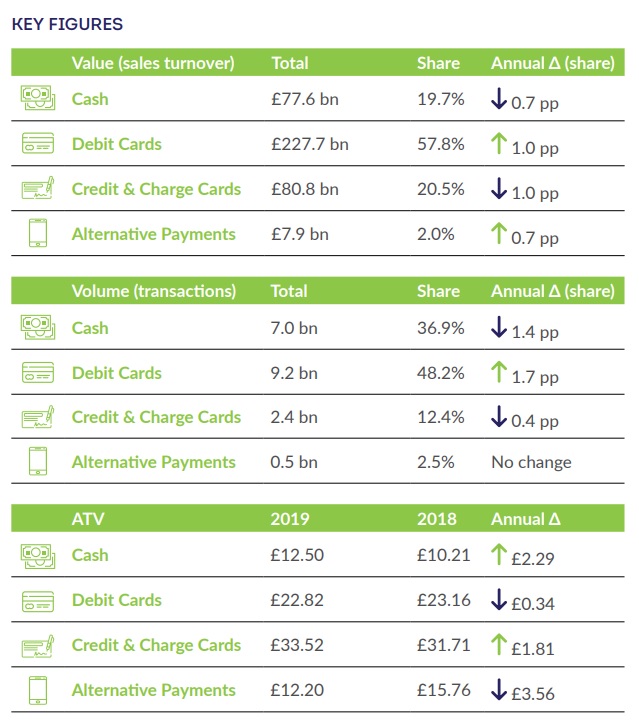 According to the BRC’s latest Payment Survey, card use continued to rise steadily from 54% of transactions in 2016 to 61% in 2019.

This trend has accelerated due to the COVID-19 pandemic, which lead to more customers shopping online or paying by card in store, although the BRC could not reveal exact figures for 2020 as yet.

Meanwhile, the cost to retailers of accepting payments reached £1.1 billion in 2019, of which £950 million was from card payments. While card payments account for 4 in every 5 pounds spent in retail, they also incur the largest charges.

Conducted by the BRC for over twenty years, the Survey utilises an exclusive set of data from retailers to assess the changing approaches in the ways that customers choose to pay for goods.

It also provides a unique look at the cost of collection across different payment channels and provides a valuable benchmarking tool for BRC members.

Excessive Card Costs: Retailers spent more than £1.1 billion in 2019 to accept payments from their customers. Cash remains the most cost-effective payment acceptance channel for retailers with an average transaction cost of just 1.4 pence per transaction. Debit cards remain around four times as expensive to process, measured in pence per average transaction, whilst credit cards are more than three times as expensive to process as debit cards.

Action Needed on Cards: Cards accounted for almost 80% of retail spending prior to a COVID-19, and a range of sources indicate that the pandemic has gone significantly further to increase the UK’s reliance on them. With a series of consultations underway by HM Treasury or the Payment Systems Regulator (PSR), there has never been a more appropriate time for decisive action to protect businesses and consumers from the market failures in Europe’s largest card market.

The report goes on to say, “As a payment method that accounted for 80% of retail spending prior to a Covid-19, almost every merchant in the UK must accept card payments and procure card-acquiring services. Card fees are therefore a key cost of doing business for all merchants, with the costs of card services ultimately reflected in consumer prices.”

The Interchange Fee Regulation (IFR) intended to slash the excessive charges levied on merchants and their customers, collected by card-issuing banks. This went some way to tackling the perverse incentives of a market that drives costs up rather than down.

However, the PSR has found that SMEs received little or no benefit, and interchange fees remain a significant component of merchants’ card costs and difficult to justify with schemes operating successfully in Europe and Canada with zero interchange fees. Perverse incentives continue as card schemes use thinly veiled circumventions of the IFR to win over card-issuing banks with alternatively labelled kickbacks that have a similar impact on the costs borne by end users.

Clearly the least competitive layer of the card payments ecosystem, with a duopoly controlling 98% of the UK market. The card schemes levy hundreds of fees on transactions across countless variables making it impossible for even the largest merchant to accurately forecast card costs, and consumers ultimately pay the bill in the form of higher prices. Complex billing structures have further become a powerful tool to bamboozle political, regulatory or legal attempts to rein in increasing abuses of the schemes’ dominant market positions, which has seen scheme fees billed to merchants double since implementation of the IFR (PSR Card-Acquiring Review, Interim Report). The increases in scheme fees reported in previous BRC Payment Surveys – 39% in 2017 and 56% in 2018, measured as a percentage of turnover – are clear demonstrations of an abuse of market dominance, and retailers have received notices of further fees that they must pay to accept payments online.

The PSR are already carrying out a market review into card-acquiring services following concerns that the supply of these services may not be working well for merchants, and ultimately consumers. The interim report demonstrates that card scheme services are adversely affecting the supply of card-acquiring services more than any other factor, and recognises a lack of transparency around fees and the complexity of comparing prices. Shopping around is part of the answer, identified by the report, but for large merchants with their own legacy systems, this can be a costly and time-consuming exercise not to be repeated often. Smaller merchants can be subject to onerous restrictions.