The advent of the Internet of Things (IoT) has propelled the demand for better security solutions on electronic devices.

Apple’s iPhone 5s, which was released in 2013, was the first smartphone to feature a fingerprint recognition system as to further guarantee user privacy. Since then, interests on the developments of various biometric identification technologies have been rising.

Global market research firm TrendForce finds that the market value of biometric identification for financial services applications will increase from $123 million in 2015 to $657 million in 2019. This significant growth is mainly driven by innovations within the global finance industry. Among regions, Asia Pacific has the largest growth potential followed by Europe. 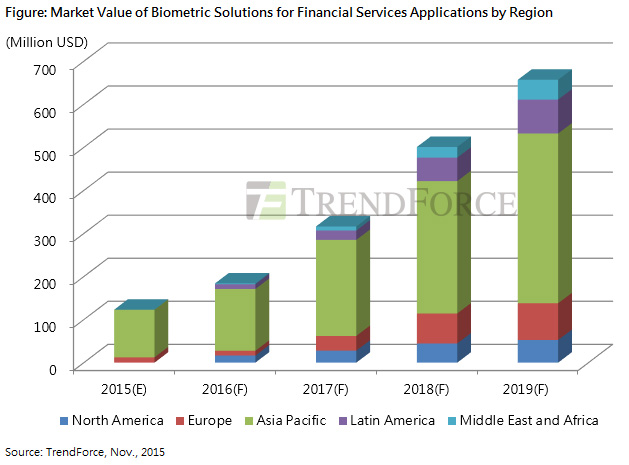 Vein recognition technology is restricted to checking vein patterns of living body tissues and offers reliable reading. Moreover, vein patterns are nearly impossible to counterfeit. Many banks worldwide consequently have incorporated this technology into their ATMs to improve the user authentication procedure of these machines.

In Japan, for instance, the penetration rate of ATMs with finger vein recognition technology is over 80%. Banks there have been quick to adopt better security solutions because they legally and wholly liable for monetary losses due to false user identification made by their ATMs. Barclays also brought in this technology last year in September. The U.K.-based banking company will extend this biometric security procedure to its general client accounts if the trial period is successful. Bradesco, a major Brazilian bank, offers an even more impressive example as the company has not suffered any ATM-related fraud since it upgraded its machines to identify palm vein patterns in 2007.

Lin also noted that banks in China are only beginning to adopt palm vein recognition technology. Panzhihua City Commercial Bank, which is based in China’s Sichuan province, has taken the initiative by introducing an ATM that reads the vein pattern of an entire palm. The bank’s clients first select palm authentication option on the ATM screen, and then they enter their personal security codes into the machine and have their palms scanned. Once the vein patterns of their palms are verified, clients will be able make to deposit, withdrawal and transfer. ATM cards are no longer necessary for these tasks.