Big Tech investments – Where are the giants spending money

From recent reports its is clear that during the COVID-19 pandemic, some big tech giants are taking advantage of the uncertainty to make strategic moves.

Q3 2020 has been the second consecutive record quarter for big tech investments, despite the global pandemic. Here’s where FAMGA is investing.

Facebook, Amazon, Microsoft, Google, and Apple (FAMGA) stocks have all outperformed the overall market since the COVID-19 outbreak was declared a pandemic on March 11, as consumers spend more time and money online.

Below, we take a look at FAMGA’s recent investments amid the COVID-19 pandemic, and what they may mean for the future of big tech.

According to CB Insights, FAMGA has set funding records for two consecutive quarters — the companies participated in nine deals in Q2 2020 totalling a record $6.1 billion in investments, but Q3 2020 funding has already surged past that number as the firms make much larger bets amid the pandemic. 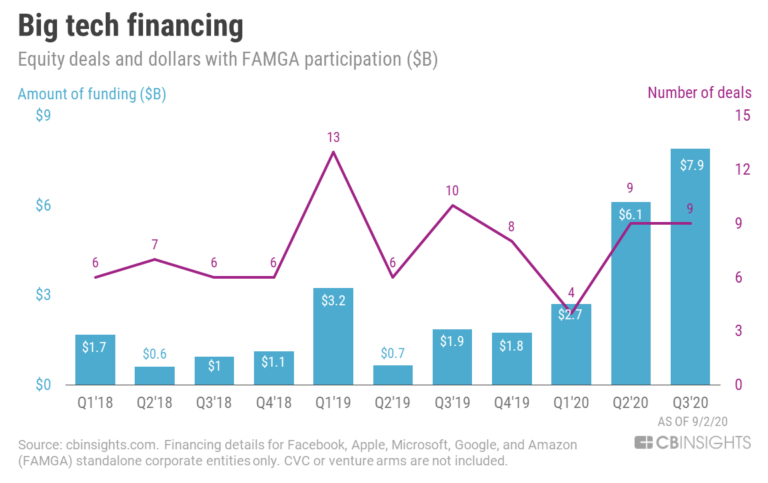 The following business social graph highlights only equity investments since the start of the pandemic (3/11/20) for each tech giant’s standalone corporate entity. It does not include venture investments from any CVC arms or investment funds. 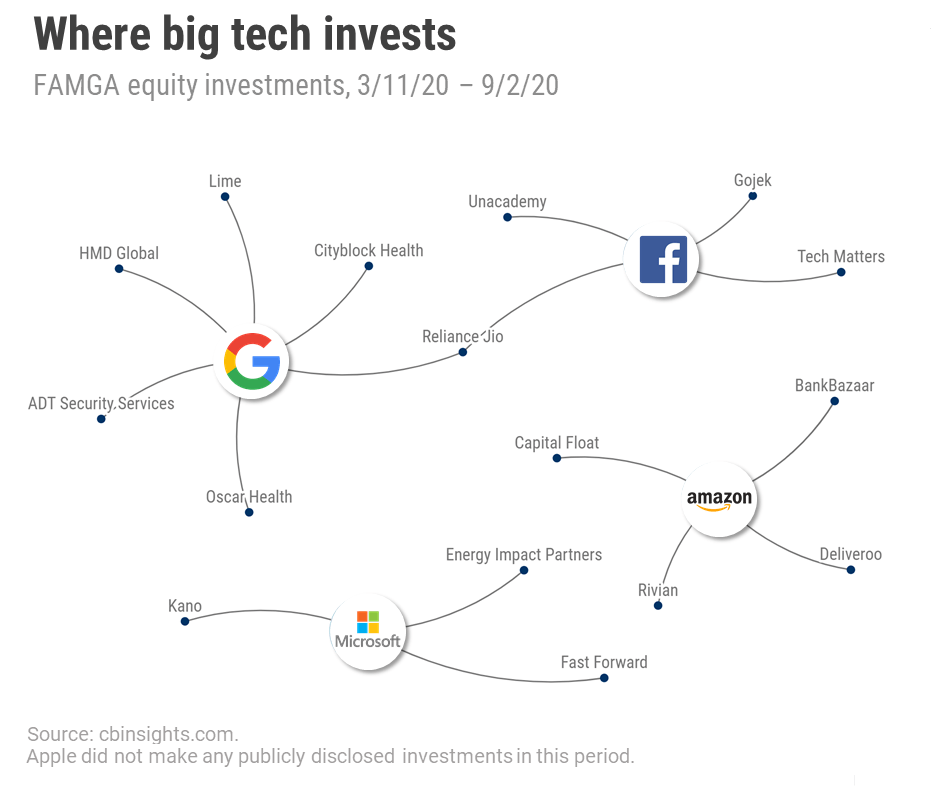 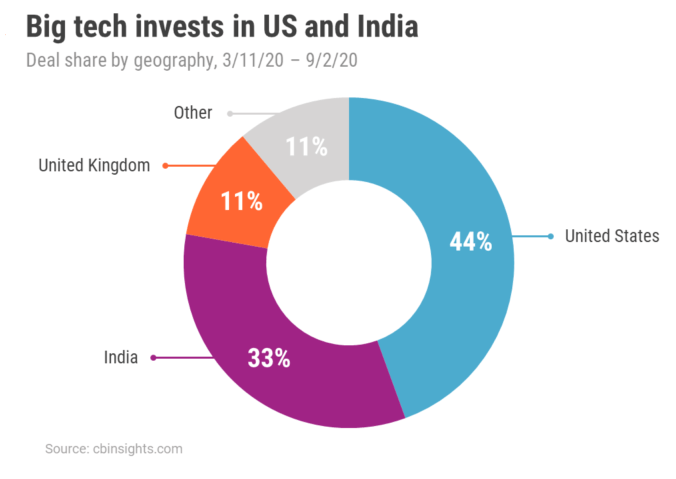 Alphabet, Google’s parent company, has made the most investments of the FAMGA cohort since the start of the pandemic, participating in six deals since March. Most of these investments (four rounds) occurred in Q3 2020, including a massive $4.5 billion corporate minority investment into India’s largest telecom operator Reliance Jio. Google bought a 7.7% stake in the company, and the tech giant announced it would be working with Jio on the development of a low-cost Android phone for Jio’s 500 million expected Indian customers.

Reliance Jio also received a $5.7 billion round from Facebook (under its subsidiary Jaadhu Holdings) in April 2020.

Other investments include a July $54 million Series B in digital health startup Cityblock Health with Redpoint Ventures, 8VC, Thrive Capital, and others, and a $170 million Series E in scooter share company Lime with Bain Capital Ventures, Uber, and Google Ventures.

A third of the investments made by big tech companies in the past six months have gone to India-based companies.

Two of Amazon’s 2020 investments have gone to India-based companies. Since the pandemic declaration, the e-commerce giant has participated in a $3.8 million Series D tranche to loan & insurance policy aggregation platform BankBazaar and a $15 million Series E to SMB lender Capital Float. These India-based FinTech investments highlight that Amazon is looking to further deepen its footprint in the region.

In April, Facebook invested $5.7 billion for a 10% stake in Reliance Jio, three months before Google’s investment into the company. Facebook’s investment was reportedly the largest corporate minority financing ever made by a tech company globally as well as the largest foreign direct investment in technology in India’s history.

Reliance Jio has raised more than $20 billion since April 2020 and is now valued at about $58 billion, with funding from investors like Intel Capital, Qualcomm Ventures, KKR, and General Atlantic.