Beyond a billion: The mobile money landscape in Asia

In 2019, the mobile money industry reached a major milestone of exceeding 1 billion accounts, where Asia made a remarkable contribution adding 42 million new accounts. Currently, Asia hosts 473 million registered accounts, making up almost half of all mobile money accounts globally. This means that the region is now matching Sub-Saharan Africa’s share of global accounts.

Over the past five years, a considerable number of new mobile money services have surfaced in the region providing additional momentum to its growth – according to the GSMA.

These new services have largely been concentrated in East Asia and Pacific, with the region now holding 52 deployments compared to just 32 in 2014, and a greater proportion of services being led by non-MNOs. While East Asia and Pacific witnessed a 24% growth in registered accounts over the past year, South Asia’s overall growth was hindered due to an increasingly burdensome regulatory and operating environment in India.

While mobile money has reached over a quarter of Asia, evident by the share of registered accounts as a proportion of the adult population, active usage across the region continues to lag behind account ownership.

Although account activity rates have made slight gains across the region, an observable imparity between registered and active 90-day accounts persists. However, while great strides in regional account activity are yet to emerge, it is important to highlight the progressive services within the region.

30 services in Asia now have over 1 million active accounts (90-day) in contrast to just seven in 2014, with 48% of services (42/87) having an account activity rate greater than the regional average. 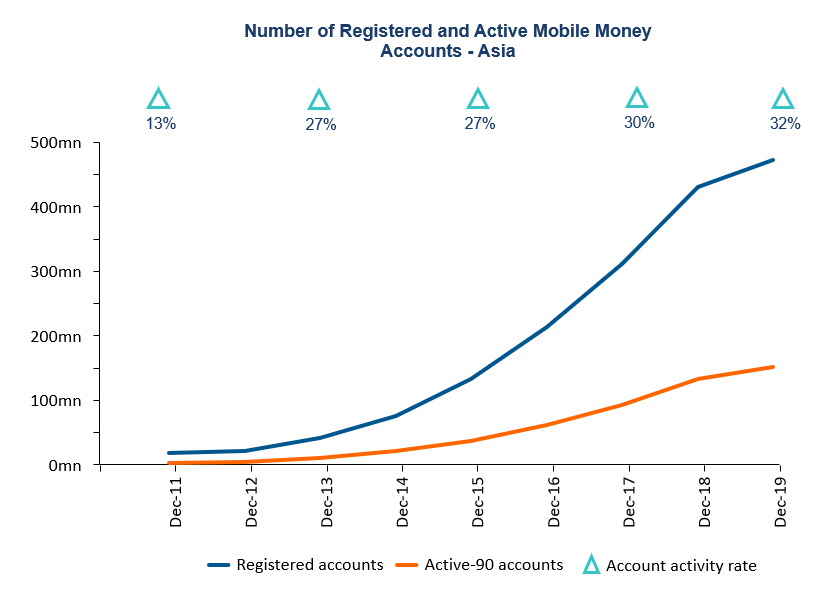 Continued usage of more complex mobile money products tied to higher ticket sizes, led to Asia transacting a total of $204 billion through mobile money in 2019, doubling its share of the value of global mobile money transactions since 2013.

International remittances and merchant payments for instance, remained the top two fastest growing products of 2019 in the region. People are also increasing the usage of their mobile money accounts to pay for utility services such as energy and water. In fact, in South Asia alone, utility payments account for 55% of the total value of bill payments processed via mobile money.

Although cash-in and cash-out transactions still represent a substantial share of mobile money flows in the region, as users have deviated from cash the mix of transaction values in Asia has become more balanced. 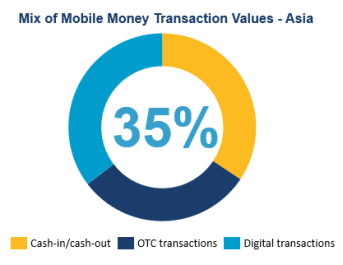 Of all transactions carried out in Asia, over a third are now digital. Asia’s path towards a digitally-led transaction mix has largely been driven by greater integration with banks and an increasing number of seamless third-party integrations via APIs. This has been supplemented by Asia’s rapid growth in mobile internet and smartphone adoption.

A holistic view of Asia’s mobile money landscape shows that almost twice the amount of value is currently circulating than exiting the mobile money system, further emphasising the region’s shift towards digital.

While the amount in circulation is still largely driven by P2P transfers, there has been significant progress in bridging the gap between offline customers and online merchants. Asia is one of the only regions where online merchant payments account for the majority of total retail payments.

The region has also made a faster transition towards adapting QR code as an acceptance technology for retail payments, in comparison with its global peers where USSD continues to prevail.

In short, mobile money services have made important headway in Asia, especially in account adoption and usage. However, there is still a sizeable opportunity to further digitise the payments ecosystem transactions and explore more sophisticated adjacent products such as credit, savings and insurance.

For instance, despite international remittances being one of the fastest-growing products in Asia, only $85 million out of the $35 billion formal remittance flows in the region are captured by mobile money. Here, the region’s groundwork in smartphone and mobile internet penetration will only act to its advantage.

The post Beyond a billion: The mobile money landscape in Asia appeared first on Payments Cards & Mobile.