Barclays says it is installing contactless ATM’s in branches across the country, enabling customers to withdraw up to £100 by tapping their mobile phone or debit cards at the terminal. 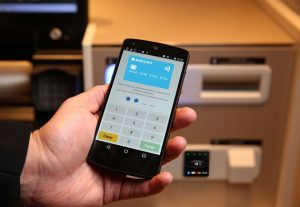 The service is initially being piloted in the North before rolling out to over 180 Barclays branches in the New Year. It will be available on over 600 in-branch machines, says the bank, allowing customers to withdraw cash with just a tap of their Android smartphone or contactless debit card.

The service will be available for Android smartphone users with the Barclays banking app installed. Customers can either insert the amount and PIN on the banking app and tap the machine to collect their funds, or place their phone or debit card against the contactless reader before entering their PIN on the machine and withdrawing their cash as normal.

The bank says it will help to make cash withdrawals more secure by removing the threat from magnetic card skimming and distraction fraud.