Banks struggle to keep up in race for payments supremacy

A new report states that senior payments executives at banks feel like they are locked in a payments technology arms race. 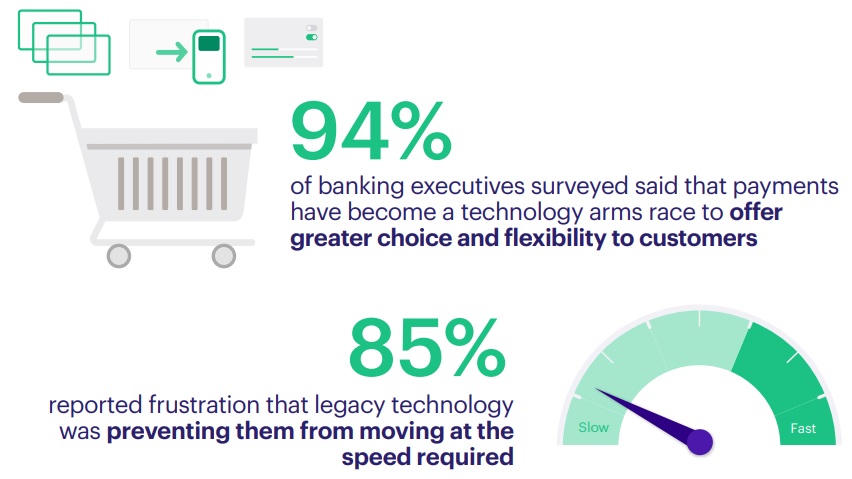 Banks struggle to keep up in race for payments supremacy

They also worryingly describe themselves as held back by the technology they use from being able to really compete.

More than a third (36%) said they were frequently delayed delivering new payment services and features to market. Frustration was high: 85% reported frustration that legacy technology was preventing them from moving at the speed required to meet market demand.

Faced with the immediate need to develop new payment solutions, exacerbated by COVID-19, banks using legacy platforms face compounding issues. They’re building from mainframe systems that can be expensive to update, are complex, and use outdated architecture.

To add to the puzzle, many have bolted on new features and solutions over the years. The core systems are largely disconnected from the customer experience, making updating them or adding in new features increasingly time-consuming.

The idea of an industry held back by the legacy platforms it is built on is not a new concept in technology.

But what is new, is just how restricted and frustrated banks surveyed felt. A staggering 84% of the executives surveyed said that legacy banking infrastructure was restricting them, making it almost impossible for them to innovate.

Banks can see the change they need to make, but realising that change is another story. Three-quarters of executives said that COVID-19 had changed their strategy, but 60% said that the lack of flexibility and agility of legacy systems was a significant challenge when implementing and preparing for future strategy.

More than half (56%) said that they battled a lack of agility when building and launching new services.

It’s not just that they’re held back from launching new features, but that the technology they’re building from is making innovation costly and time consuming.

More than two-thirds of executives surveyed (67%) said the length of time it takes to deliver new services to market was a challenge, while 55% said the cost of maintaining and managing legacy systems was holding them back.

39% of people surveyed said that their core banking platform was just too complicated, and that this complexity was holding them back from innovating at speed. This directly bleeds into the developer culture within traditional banks, where changes need to be made wholesale with little room for rolling improvements.

One-third (33%) said they lack an iterative DevOps approach internally and instead of making improvements to services as needed, tended to execute large scale rollouts over months (or even years).

This is forcing banks into a lose-lose situation. Almost half (46%) said that the lack of customisation options means they face large up-front costs to introduce new features.

More than half (55%) said disjointed and siloed payment platforms made introducing new features inefficient, but upgrading was just as much of a headache, with 62% finding it too difficult to integrate legacy technology with modern systems.

But while these issues began with technology, they crossed over into culture. More than half (58%) of bank executives surveyed said there was a prevailing preference for the status quo and a culture of unwillingness to take risks, while 44% said that previous poor experiences had created a lack of trust, and 35% said the siloed nature of their teams made getting internal alignment difficult.

The post Banks struggle to keep up in race for payments supremacy appeared first on Payments Cards & Mobile.