Banking in Europe: Banks and bank branches continue to decline

The European Banking Federation today has published Banking in Europe: Facts & Figures, its annual update on the banking sector in Europe. The publication shows that the contraction in the European banking sector, both in terms of staff numbers and branches, continued in 2019 as banking customers have continuously, widely and enthusiastically, adopted electronic payments as well as online and mobile banking.

This year’s report also explores the COVID-19 impact on the banking sector. A coordinated response from the EU authorities has successfully mitigated the surge in market volatility after the outbreak.

Monetary policy drive, supervisory flexibility, regulatory fixes along with significant support from the Recovery Fund, continued to sustain the European economy throughout the pandemic. Banks are part of the solution, maintaining and enhancing the level of lending to the European economy.

The Banking in Europe overview shows that the total number of credit institutions in the European Union has consistently fallen for eleven years in a row and declined by 1.8% in 2019 to 5.981 institutions, down by 2.544 since the contraction began.

The importance of widespread bank branch networks continues to be reduced as the number of bank branches in the EU declined to 163.270, showing that about 10.000 branches were closed last year. Compared to 2008 the total number of bank branches has declined 31%, or by almost 75,000, reflecting the rapid uptake of online and mobile banking services in recent years. In 2019 more than half of all people in the EU, 58%, used Internet banking, compared to 25 percent in 2007.

The number of people working for credit institutions in the EU fell to the lowest level since the ECB started measuring this in 1997 and stood at approximately 2.62 million people at the end of 2019, compared to 2.67 million a year earlier. This compares to 3.26 million in 2008. About two-thirds of all bank staff in the EU is employed by a bank headquartered in one of the five largest EU economies.

The downward trend in the number of EU-28 credit institutions, which started in 2009, continues ten years after, with the number falling to 5,981 in 2019. The decline however is the slightest (-107 units) since the trend started. 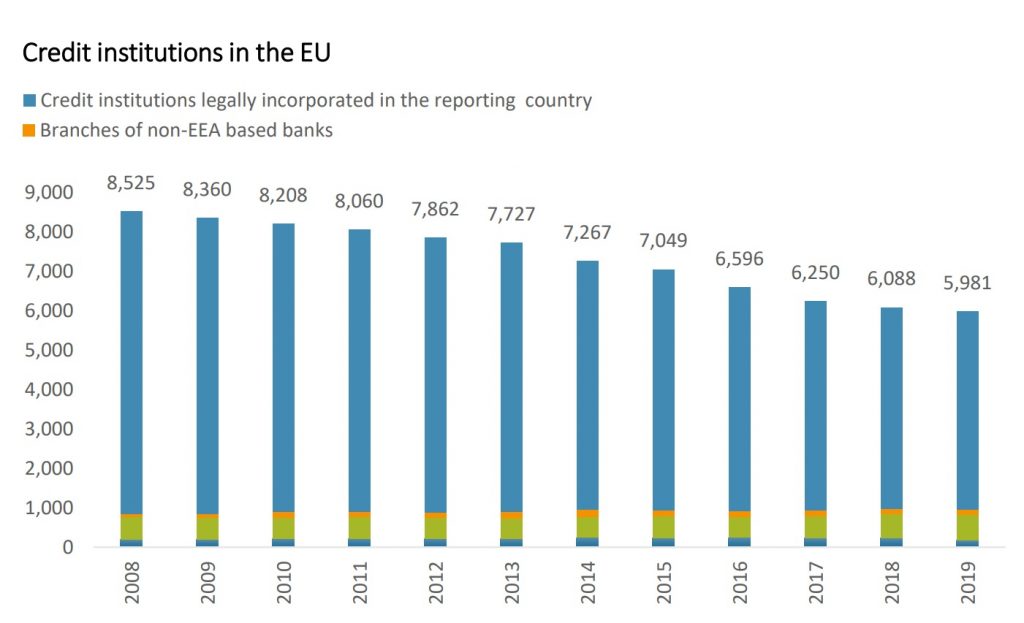 This marked a decline of 1.8% compared to the previous year and a reduction of 2,544 (- 30%), in total, since contraction started. Most of the consolidation continues taking place within credit institutions, legally incorporated into the reporting country, where the stock has fallen by 35% since 2008.

Consolidation in the banking sector continues helping to reduce overcapacity and aiming to enhance profitability.

The rationalisation taking place in the EU banking sector continues to involve bank branches as the number of (domestic) branches continues to shrink, falling to about 163,000 by the end of 2019.

This trend continues reflecting the increasing use of digital banking by consumers as more than half of EU individuals, 58%, used internet banking in 2019, up from 54% in 2018, and 25% in 2007, when the data series began.

This confirms that banking customers have continuously, widely and enthusiastically, adopting electronic payments as well as online and mobile banking. This has consequently reduced the importance of widespread bank branch networks, allowing banks to scale back further their physical presence.

Business and household lending on the rise

The total deposits from businesses and households grew by 4.7%to €17.7 trillion, with €13.1 trillion in deposits in the euro area. Deposits from households rose 6.2% compared to a year earlier while business (non-financial corporation) deposits increased 2.9%.