A new survey from 451 Research finds Apple Pay gaining momentum in the mobile payments space, primarily at the expense of PayPal.

“Our latest survey shows planned use of Apple Pay has been on an upward trajectory since it became available six months ago – with the service helping to spark consumer demand for mobile payment technologies,” said Andy Golub, Survey Research Director for 451 Research. “Although consumer perceptions of security remain an issue, the results point to marked improvements in this area.”

The survey, conducted in March by 451 Research’s ChangeWave service, consisted of 4,168 respondents primarily based in North America, and looked at planned use of mobile payment applications and the issue of security. 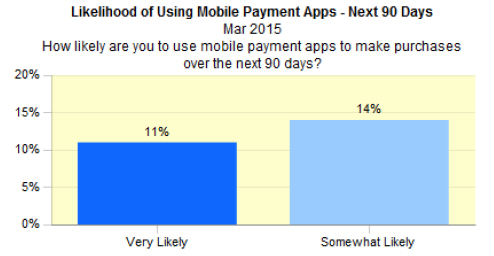 owners about their planned use over the next 90 days, and the survey results show strong interest.

One-quarter (25%) of smartphone owners say they are likely to use mobile payment apps over the next 90 days (11% Very Likely; 14% Somewhat Likely). This number is up just 1-pt since 451’s previous ChangeWave survey in December 2014, but is a full 6-pts higher than one year ago.

Smartphone owners using iOS (34%) are more than twice as likely to use mobile payment apps compared to Android (16%), BlackBerry (13%) or Windows Phone (5%) users. 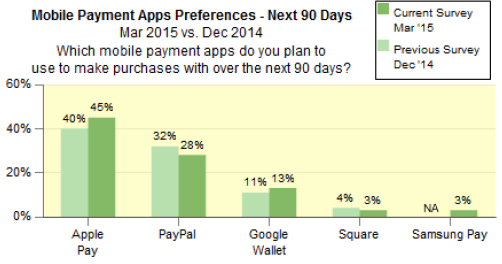 using going forward. A total of 45% say they plan to use Apple Pay – which is a 5-pt jump since December.

PayPal (28%) is still solidly in second place, but is down 4-pts compared to three months ago. As seen in the following chart, PayPal is clearly being impacted by the 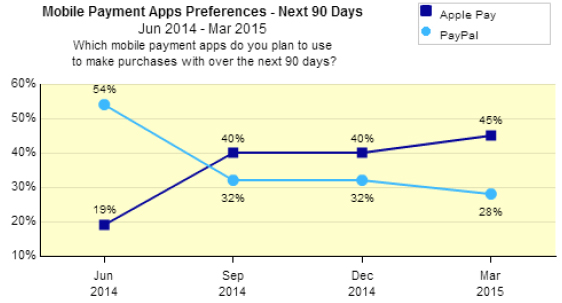 “The introduction of Apple Pay has catalyzed a wave of strategic moves across the mobile payments ecosystem,” said Jordan McKee, 451 Research’s Senior Mobile Payments Analyst. “In the wake of Apple’s entrance, Google and PayPal have made significant acquisitions, while players such as Facebook and Samsung are rolling out payment products to remain competitive. Moving forward, the pace of activity will only accelerate as vendors look to capitalize on the growing contactless payments infrastructure and secure a foothold in this rapidly evolving sector.”

Looking at satisfaction among consumers who are already using mobile payment apps, 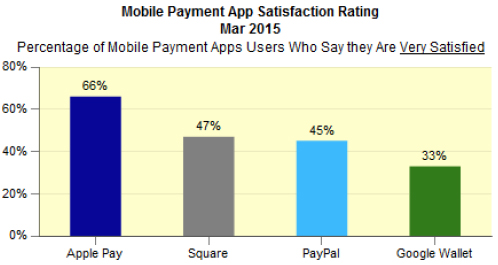 Apple outperforms, with 66% of those who have used Apple Pay saying they’re Very Satisfied with the service.

The survey also focused on consumer sentiment toward mobile payment security, and asked all respondents

whether they consider mobile payments to be more or less secure than traditional credit cards. In an important finding, the results show a slow, yet steady, improvement in the perception of security over the past year.

One in four respondents (24%) believe mobile payments are more secure than traditional credit cards (6% Significantly More; 18% Somewhat More), while 27% think they’re less secure (16% Somewhat Less; 11% Significantly Less). This is a net 3-pt improvement compared to December 2014 and a major 26-pt improvement since a year ago.

Other key findings include: