If you mentioned that Amazon was trying to take a foothold in the financial services and payments market, not many would be surprised. But what if you explained how deep that move had gone?

From payments to lending to insurance to checking accounts, Amazon is attacking financial services from every angle without applying to be a conventional bank. In a great report, CB Insights breaks down what Amazon is doing to support merchants and consumers, from cashierless payment terminals to health insurance for sellers in India.

In 2017, Andreessen Horowitz general partner Alex Rampell said that of all the tech giants that could make a major move in financial services, “Amazon is the most formidable. If Amazon can get you lower-debt payments or give you a bank account, you’ll buy more stuff on Amazon.”

While the anticipation for Amazon’s plunge into banking builds each year, it’s important to first understand it’s existing strategy in financial services — what Amazon has launched and built, where the company is investing, and what recent products tell us about it’s future ambitions.

Based the report findings, it’s hard to claim that Amazon is building the next-generation bank. But it’s clear that the company remains very focused on building financial services products that support its core strategic goal: increasing participation in the Amazon ecosystem.

As a result, the company has built and launched tools that aim to:

In parallel, the company has made several FinTech investments, mostly focused on international markets (India and Mexico, among others), where partners can help serve the core strategic goal.

In aggregate, these product development and investment decisions reveal that Amazon isn’t building a traditional bank that serves everyone. Instead, it has taken the core components of a modern banking experience and tweaked them to suit its customers (both merchants and consumers).

In a sense, Amazon is building a bank for itself — and that may be an even more compelling development than the company launching a deposit-holding bank. 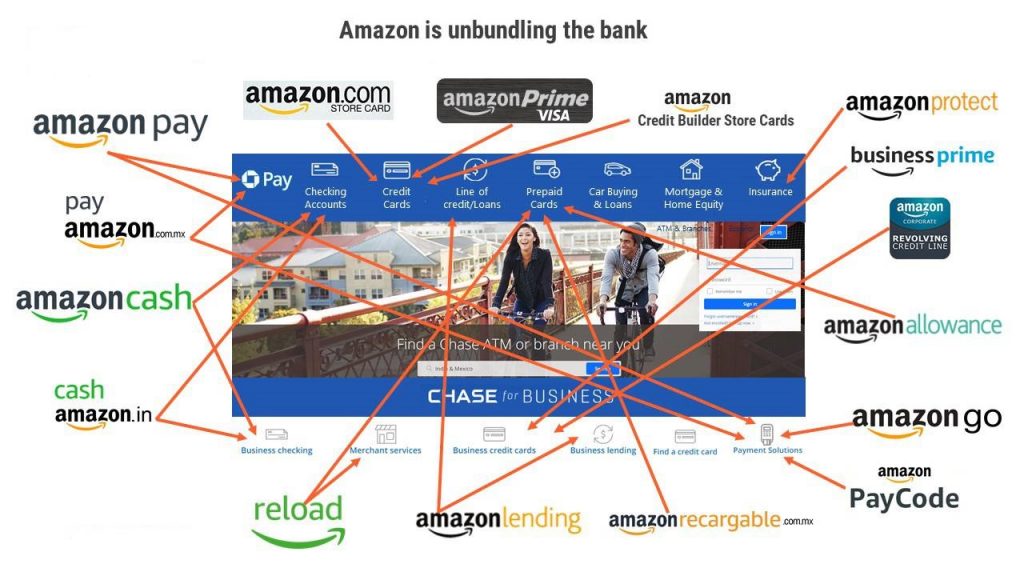 Amazon is notorious for spreading its bets before going all in on a new product, and the financial services space is no exception. Through trial and error, the company has set up key financial pillars across payments, cash deposits, and lending – all are related to it’s broader growth and product strategies.

The company has aggressively invested in payments infrastructure and services over the last few years. That’s unsurprising, given that the payments experience is so close to it’s core e-commerce business. Making payments more cash-efficient for Amazon and frictionless for customers is a key priority.

Today, Amazon Pay has evolved to include a digital wallet for customers and a payments network for both online and brick-and-mortar merchants. Since 2019, it has invested in growing Amazon Pay’s marketplace, including forming a partnership with acquiring bank Worldpay.

While Amazon Pay is the company’s latest iteration on payments, it has experimented with payments functionality for over a decade. Below is a timeline of some of the major Amazon Pay milestones: 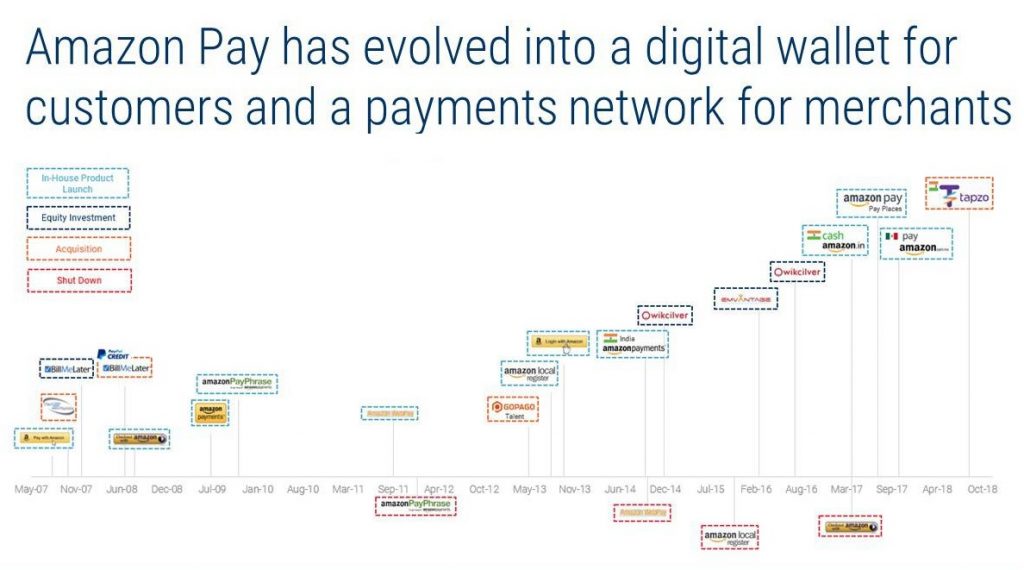 Amazon’s first known payments product, Pay with Amazon, launched in 2007. That same year, the company acquired TextPayMe, a peer-to-peer (P2P) mobile service that was re-launched as Amazon Webpay in 2011.

Webpay failed to gain user traction and was shut down in 2014, unlike up-start Venmo (now a part of rival payments processor PayPal). It’s likely that Amazon was too early to P2P payments.

In 2007, the company also invested in Bill Me Later. Bill Me Later was one of the earliest FinTech payment platforms on the market and gave big retailers the ability to offer flexible financing programs. Although Bill Me Later was scooped up by PayPal in 2008, Amazon remained ever focused on reducing payment friction for customers.

Over the last few years, it has used a variety of techniques to strengthen its payments experience, including launching digital wallets through Amazon Pay, acquiring tech talent of failed mobile payments startup GoPago, building a variety of tech in-house, and most recently opening up to partnering with merchant acquirers outside of Amazon’s marketplace.

Today’s iteration is Amazon Pay, a digital wallet for customers and a payments network for both online and brick-and-mortar merchants and shoppers.

In addition to serving Amazon’s core customers, payments is an attractive revenue line when thinking about the scope of the payments market. Swipe fees alone are a $90 billion-a-year business for banks, card networks like Visa, and payment processors like Stripe.

The company is finding ways to attract merchants to the Amazon Pay network beyond its experimentation with swipe fees. The company announced it would pass on the special card savings it gets from card networks (because of the volume of purchases they can guarantee) to retailers that adopt Amazon Pay. Leveraging scale and competing on fees is a classic customer acquisition strategy in Amazon’s playbook.

And while the company is famously secretive about reporting customer growth and business metrics, it reported that Amazon Pay had 300 million customers in 170 countries through Q1 2017. Payments made with Amazon Pay spiked following service expansion to new geographies — France, Italy, and Spain — and to new verticals, including government payments, travel, insurance, entertainment, and charitable donations.

Eventually, it launched a “Pay with Amazon” button for mobile and created a team with the goal of expanding payments across the web and on apps.

In March 2019, the company announced an integration with Worldpay. It is a notable pivot from Amazon’s IP strategy, where the playbook has been to build, patent, and keep proprietary technology in-house to fuel Amazon’s marketplace.

However, keeping its’s customer-centric “day one” philosophy in mind, Amazon Pay’s top priority is reducing payment friction for customers to buy goods and services and for merchants to sell more things. This is also a second attempt to build distribution with merchants, picking up where Amazon Local Register failed to gained trust.

To achieve this, Amazon Pay set up a rare independent domain and is expanding from e-commerce to omnichannel — across web, mobile, and IoT devices.

The partnership is significant because of its potential to put Amazon’s Quick Payment button in front of millions of consumers and boost distribution with merchants.

At the time of the deal, Worldpay processed more than 40 billion transactions worth about $1.7 trillion annually, supporting more than 300 payment types across 120 currencies. In July 2019, FIS announced it was acquiring Worldpay in a $43 billion cash-and-stock deal, indicating a strategic move to grow its merchant solutions business.

For Amazon, the combination of FIS and WorldPay is aligned with the company’s goal of reducing friction in payments for consumers and merchants, subsequently boosting commerce.

FIS could also be valuable for financial services pursuits as its suite of technologies ranges from POS systems to integrated card payments to cross-border payments, and covers both online and offline commerce. FIS is also one of the biggest providers of core banking processing and has integrations with Q2 technologies. Both are key elements that non-bank-chartered tech firms in the US have been leveraging to launch banking services, like checking and savings accounts.

In this article we deal only with the incursion into payments, to read the full report CLICK HERE