In  a new report from Worldpay it is predicted that the alternative payment market will leave its growing pains behind in 2016.

2016 will herald “the third age of digital payments” now that eWallets are growing in popularity, NFC offerings from technology vendors like Apple, Samsung, and Google are fighting for mass appeal, and both banks and brands are rolling out their own mobile payment apps to compete for consumer loyalty. 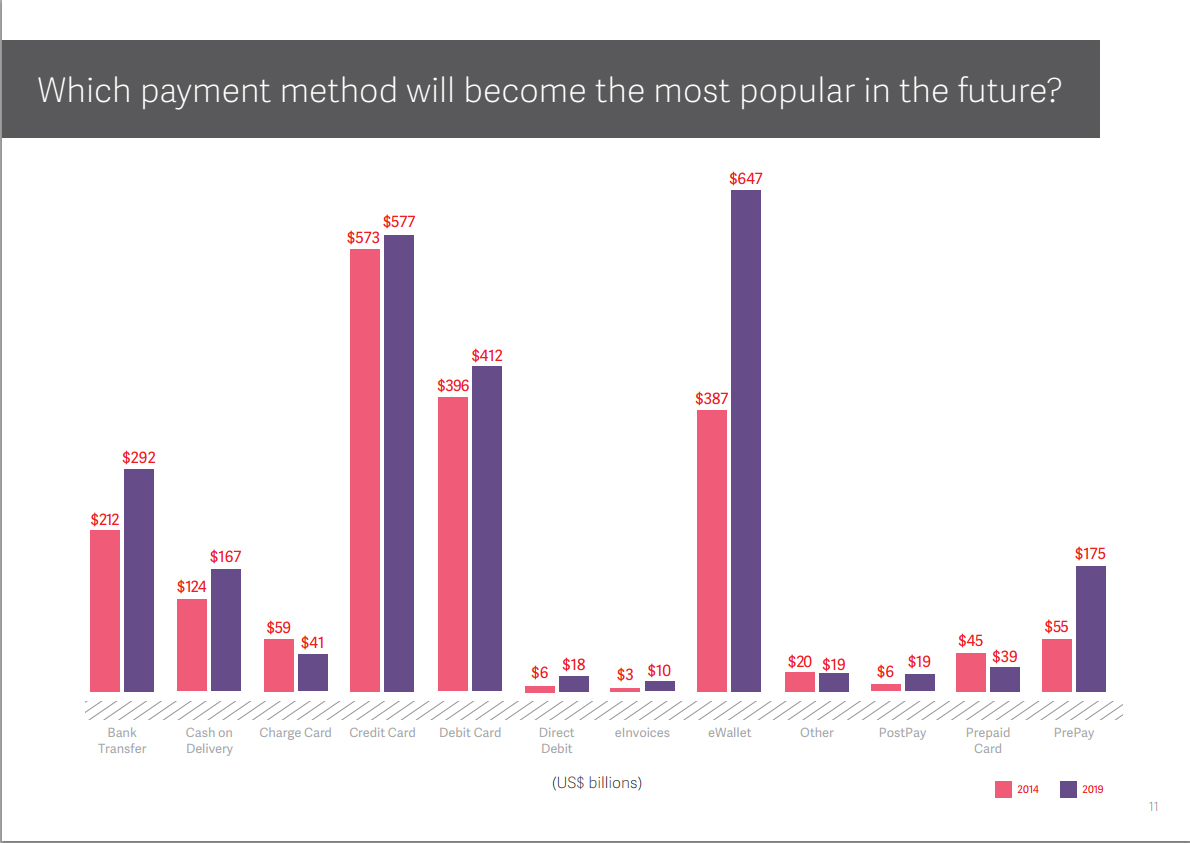 Which payment method will become most popular in the future

2016 will also be a breakthrough year for Alternative Payment Methods (APMs), Worldpay predicts. In its latest Global Payment Report, Worldpay found that APMs inched past card payments for the first time ever with 51% of market share. Worldpay predicts this gap will widen in 2016 and beyond as more consumers opt for the convenience of “e” payment options over traditional plastic.

The report also predicts that eWallets will overtake credit cards in the global eCommerce market by 2019, accounting for 27% of global turnover compared with credit cards’ 24%. Additional APMs will account for a significant portion of the remaining market alongside traditional debit card, bank transfer and cash payments. 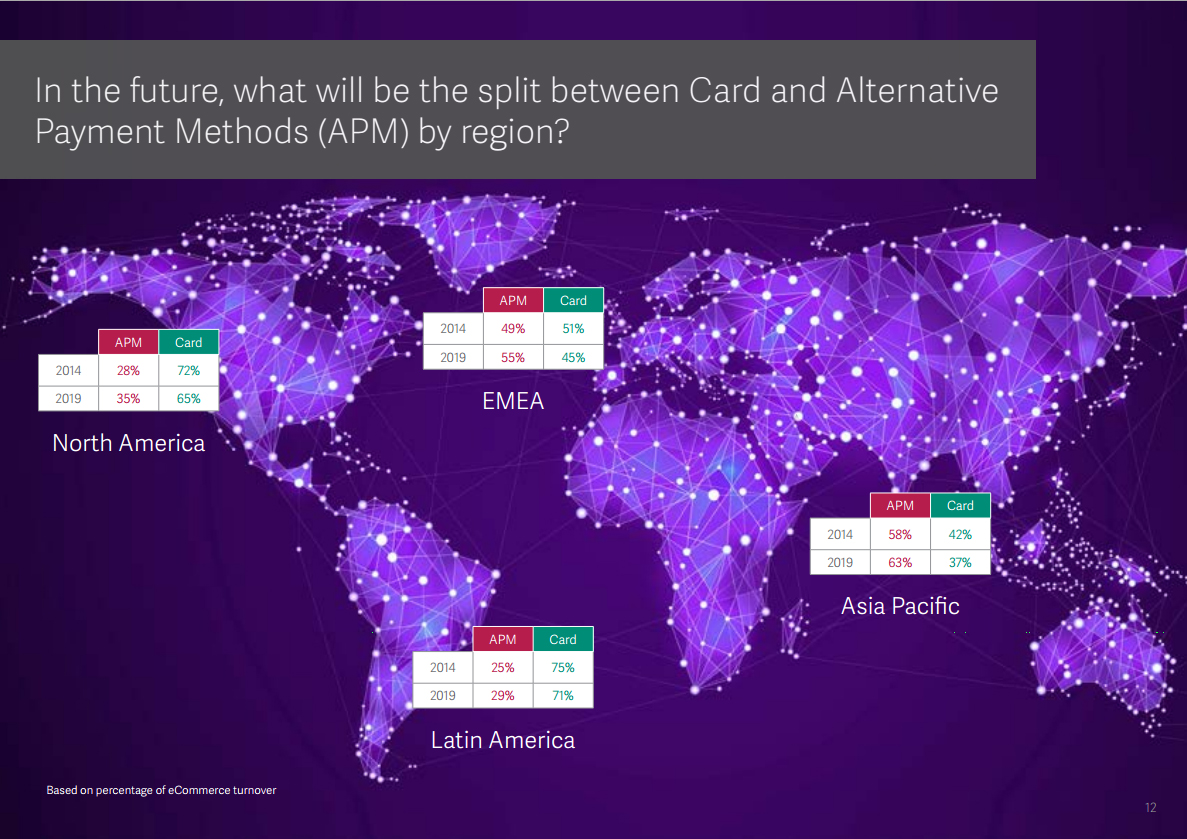 Split between Card and Alternative Payment Methods by region

Worldpay also expects eWallets to come of age over the next five years, and consumers to play the largest role in dictating which payment technologies come out on top in an increasingly crowded and confusing environment.

“The first age of digital payments kicked off with the eCommerce boom in the early 2000s when companies like PayPal and AliPay introduced eWallets to the mainstream. The second phase coincided with the rise of the smartphone at the beginning of the decade, and we’ve since seen a proliferation of new mobile apps that quickly raised the bar for convenience in payments,” explains Kevin Dallas, Chief Product Officer, Global eCommerce at Worldpay.

“However, with so many options being rolled out so quickly, a sense of app fatigue has begun to set in leaving both consumers and merchants unsure of which approach is best and questioning the convenience of using multiple eWallets. I expect the next few years will see a consolidation of the market as the public hones in on their preferred payment methods and conscientious merchants feel more confident buying into technologies that their customers have already embraced.” 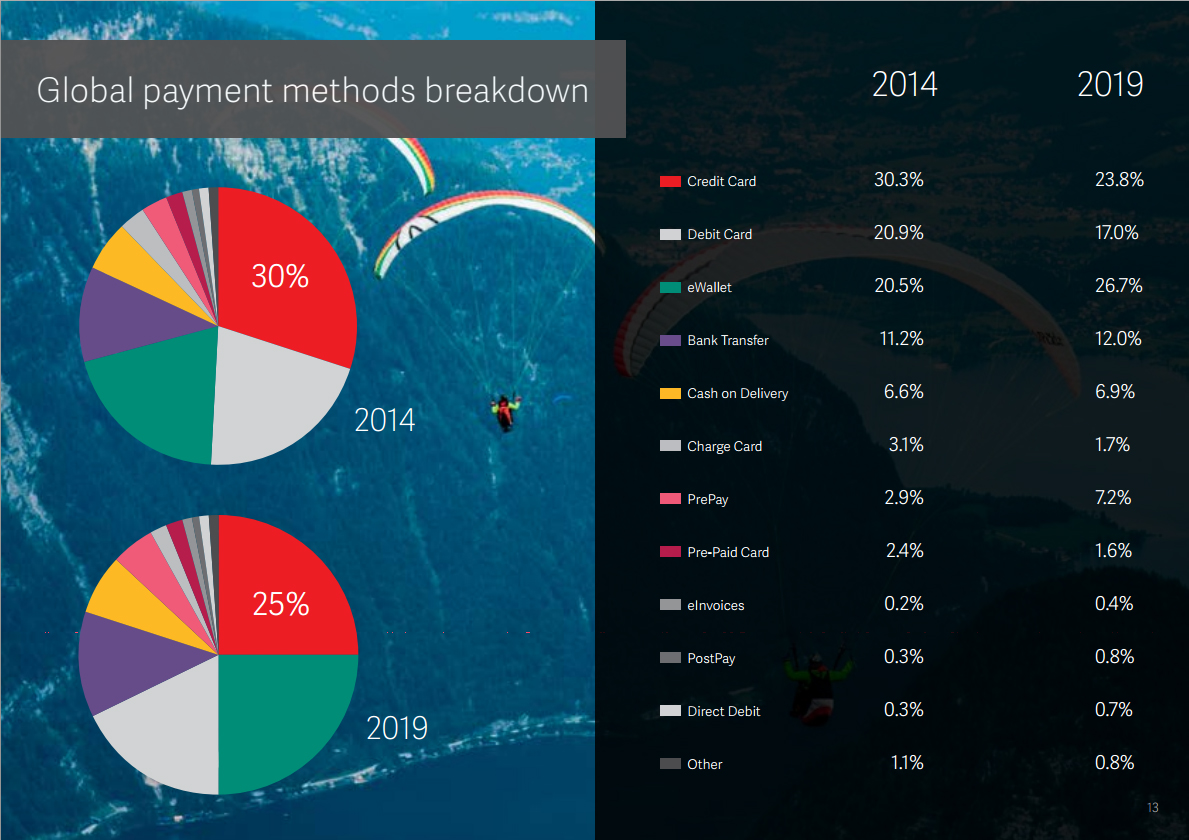