Unfortunately, with technology on the rise, there’s more room for cyber crime in 2018. According to the Cyber Security Breaches Survey 2018, 43% of businesses were a victim of a cyber security breach in the last 12 months. In the U.S., the state of California lost more than $214 million through cyber crime alone.

VPN’s are being used more and more in order to protect people’s privacy online (check the best VPN’s here). Though, despite being made aware of the risks of clicking a link, or opening an email, the figures show that attacks are ever increasing.

With evolving technology comes evolving hackers; the world are not keeping up with the fight against cyber crime – and that’s scary!

According to McAfee’s Economic Impact of Cyber Crime (February 2018) cyber criminals adapt at a fast pace. The scale of malicious activity across the internet is quite astounding. The figures are frightening on a monthly or yearly scale, let alone daily! Cyber criminals are constantly finding new technologies to target victims. With the introduction of Bitcoin, payment and transfers to/from cyber criminals is untraceable. 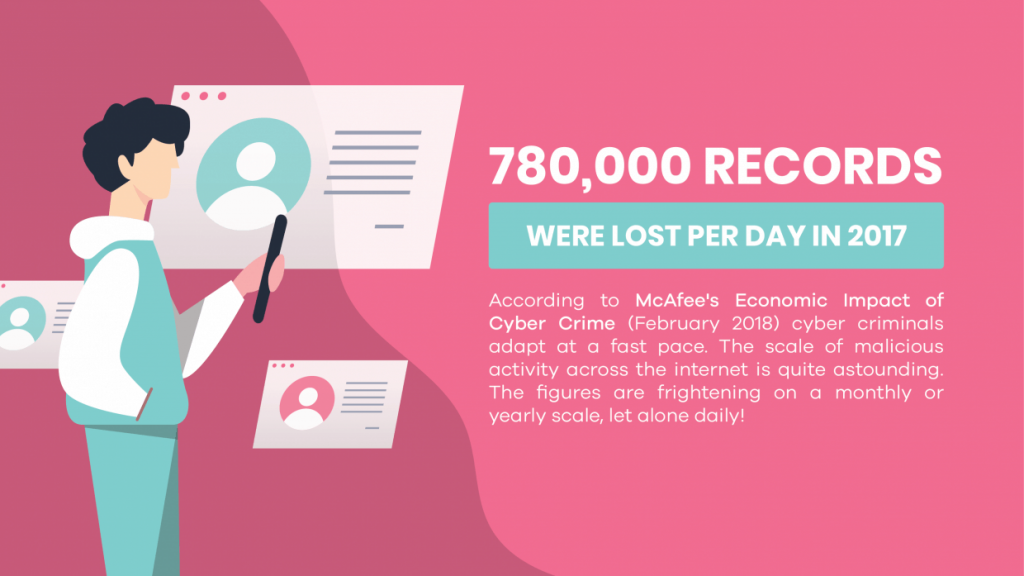 Symantec’s Internet Security Threat Report details that lifestyle apps are the main targets. The majority of these apps leak phone numbers. Further sensitive information like device location is also being made accessible. It would be completely impossible to monitor or check each of these apps for vulnerability issues. It’s essentially an open ticket for cyber criminals to do their worst.

In the first quarter of 2018, Google Play had over 3.8 million apps on their store.

#3 | Microsoft Office file formats are the most used file extensions

In the top 10 most malicious file extensions, Microsoft Office took the number 1 spot. Emails are a common way for cyber criminals to attack their victims. Emails are used on a daily basis around the world. If you see an email containing a .doc or .xls file extension, most users would relate it to Microsoft. Microsoft being a reputable company means people are more likely to open an attachment.

According to Cisco’s 2018 Annual Cybersecurity Report, 38% were Office formats

#4 | The US, UK & China are more vulnerable to Smart Home attacks

The majority of smart home devices are connected via an external network. If the router you’re using doesn’t have decent security protection, you could be opening up your home to a cyber attack. With smart home devices becoming more prevalent, criminals are finding new ways to exploit vulnerabilities.

According to Trend Micro, The US, accounted for 28% of smart home device incidents. The UK and China followed with 7% each

Varonis’s 2018 Global Data Risk Report is quite terrifying. 6.2 billion files were analysed. These files contained credit card information, health records, etc. 21% of these files were open for global access. Furthermore, 41% of companies have more than 1000 sensitive files open to everyone.

In the 2017 Official Annual Cybercrime Report, it’s estimated that cyber crime will cost $6 trillion annually by 2021. In 2015, that figure was $3 trillion. 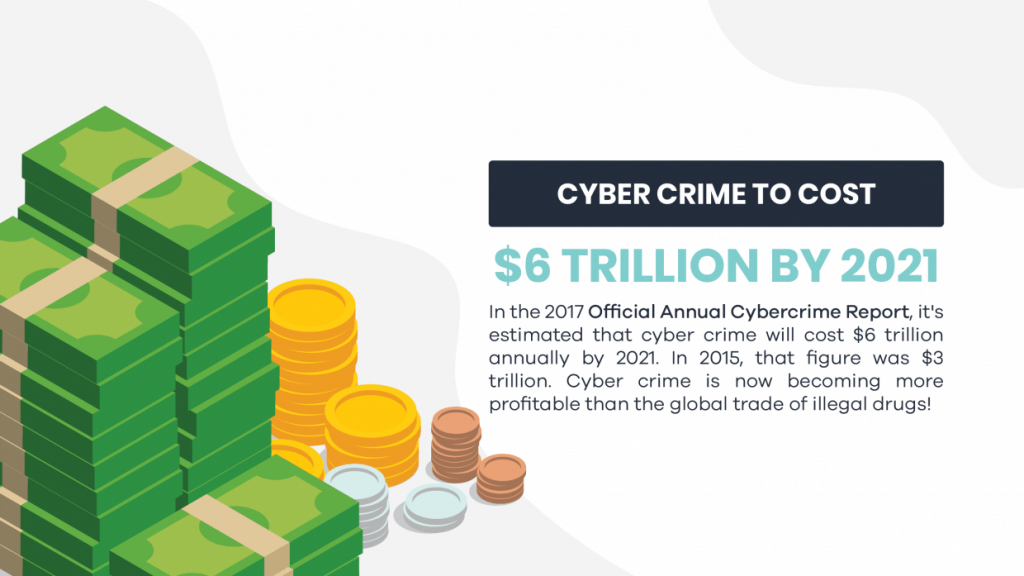 That’s almost one-third of all emails, according to Verizon’s 2018 Data Breach Investigations Report. Phishing emails no longer take the same approach they used to. Do you remember seeing an email from your bank, Apple, PayPal etc. asking for sensitive information? With the figures that high, it’s no wonder cyber criminals are preying on email victims.

The Cyber Security Breaches Survey 2017 shows UK businesses are more aware of cyber issues. However, it also shows that a large percentage of businesses aren’t seeking any advice or potentially protecting themselves from threats.

It may seem like passwords are dying, due to encryption etc. but according to Cyber Security Media, they’re not. It’s predicted that 300 billion passwords will be used by 2020. That takes into account humans and machines! That’s an awful lot of passwords, all of which require cyber security protection. If not, that’s 300 billion potential threats, worldwide. 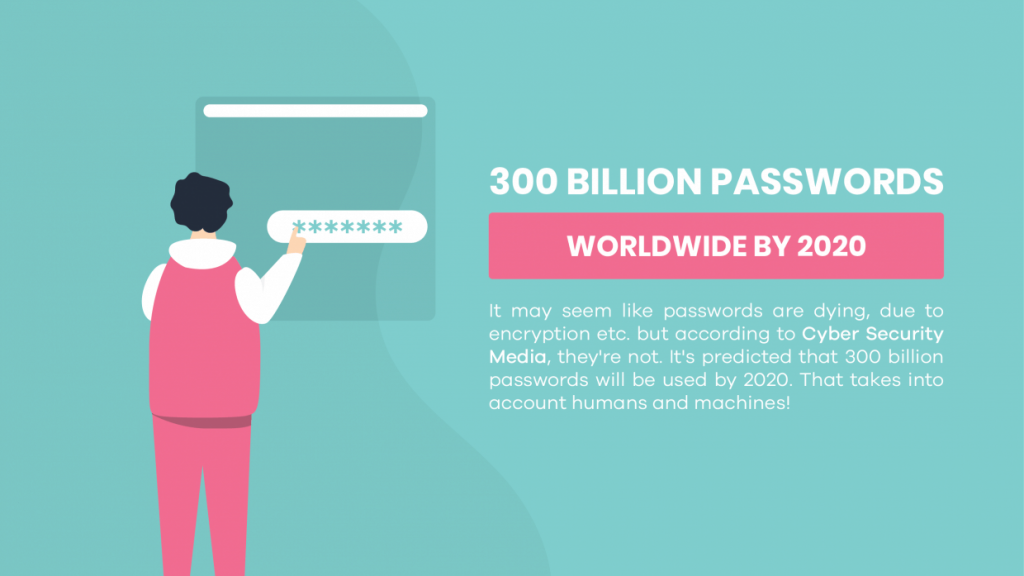 Yes, even a president can get hacked! In 2017 Emmanuel Macron’s emails were hacked. His emails were posted online just days before he was due to go head to head against his opponent. 9GB worth of data was posted to Pastebin. Macron’s campaign confirmed it had been hacked.

#12 | More than 60% of fraud originates from mobile devices

In 2016, Norton by Symantec reported over 2.5 million people were victims of cyber crime in UAE. Despite reports stating that awareness of cyber crime was high, people are still engaging in online behaviour that is deemed as risky. People know they should be aware of links and protect their information. 70% of those people still click on information that they aren’t 100% sure of. Millennial’s seem to be the most affected group of people.

53% of millennial’s experienced cyber crime in the last year

In 2015, Symantec reported the Netherlands as having the lowest cyber crime rate. Only 14% of the population were affected. Although 14% is still high, compared to other countries, it wasn’t! Indonesia, for example, was subject to the highest cyber crime rate in the world.

59% of the population fell victim to cyber crime

Coincheck is one of the biggest Bitcoin and cryptocurrency exchanges in Asia. In January 2018 it reported that it had lost $530 million due to hacking. Due to the incident, Coincheck seized and stopped all sales and withdrawals of it’s cryptocurrency at the time. The cryptocurrency used for the exchange was called NEM. Coincheck deal with other cryptocurrencies too.

Cisco investigated 130 organisations in it’s Cisco 2017 Annual Cybersecurity Report. It found that 75% of companies were affected by adware. Adware in itself is a nuisance, but it can also facilitate further malware attacks. Adware presents itself in the form of advertisements. Whether you’re using your device on or off the internet, adverts can be displayed. Often if you’re trying to perform an internet search, the results direct you to other websites or marketing pop-ups to obtain your personal data.

Although not every ransomware demand is paid, the average demand value is $1,077. Since the last report, this shows an increase of around 266%! When victims are faced with a ransom amount, they often pay up. We rely on the internet for daily activities, for personal and work. We rely on the internet to connect our devices, and even our homes with the introduction of smart home products.

Demands are significantly increasing because we’re so reliant on the internet. As ransomware attacks increase, we can expect the demand values to increase as well

#19 | China have the most malware in the world

Over 55% of China’s computers are infected with malware. Since 2014, that figure increased by nearly 30% more! Even with people being more and more aware about cyber crime, it’s clear to see it doesn’t stop attackers. Taiwan follow closely with 49% of their computers being infected. Of all the malware across the world, Trojans were the cause of the most infection. Trojan’s are malicious programs that provide a back-door kind of entry to computers.

Once hacked, attackers can access personal information, passwords, and infect other devices connected to the same network

Encryption is a process which involves encoding a message, information, or program. Encryption allows only authorised people to access it. For example, a document that may be readable in normal circumstances would appear completely illegible when encrypted. In order to access encrypted information, it must be decoded first. Hackers are of course aware of how best to hide their tracks. 90% of them use encrypted traffic to disguise what they’re doing. If we, as users, used encryption to the same level, it would be much more difficult for cyber crime to take place. 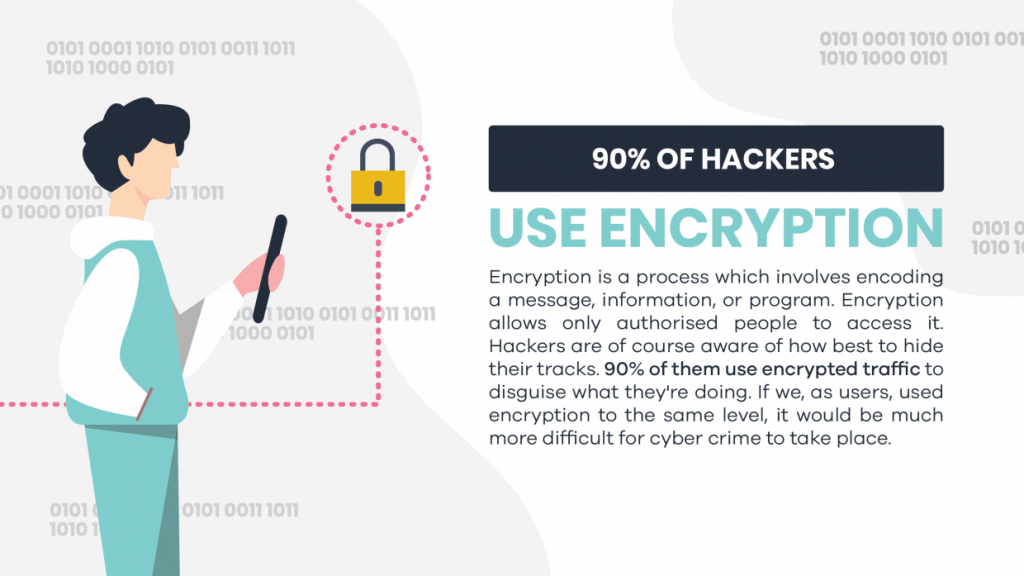 #21 | Companies take over 6 months to notice a data breach

For me, this is one of the most terrifying statistics. Research suggests that most businesses take up to 197 days to notice breach of their data. ZDNet reports finance firms can take an average of 98 days! Due to the amount of time it takes for companies to realise a data breach, attackers are able to obtain even more information. Think about it, imagine what a cyber criminal can obtain over a 6 month period. Certain industries are of course more vulnerable to attacks, due to the data they hold.

83% of finance companies incur over 50 attacks per month. Once data has been stolen, it gets sold on the black market