2021: make or break for banks – is there time left for them to change?

As part of our 2021 preview, we examine the issues facing retail and commercial banks as their customers join the digital economy. When it comes to digital adoption, some banks still don’t get what’s needed – is there any time left for them to change?

Against the spirit of the times, this article will look ahead with optimism beyond COVID-19 to a time when growth resumes. That may not happen until the second half of 2021 at the earliest – but it will come, writes James Wood, Managing Editor, Payments Cards & Mobile.

And when it comes growth will happen – for banks as for the rest of the economy – through the mobile and digital channels. But doubts remain as to whether banks have done enough not just to digitise their existing services, but to innovate products and maintain customer satisfaction in an all-digital environment. 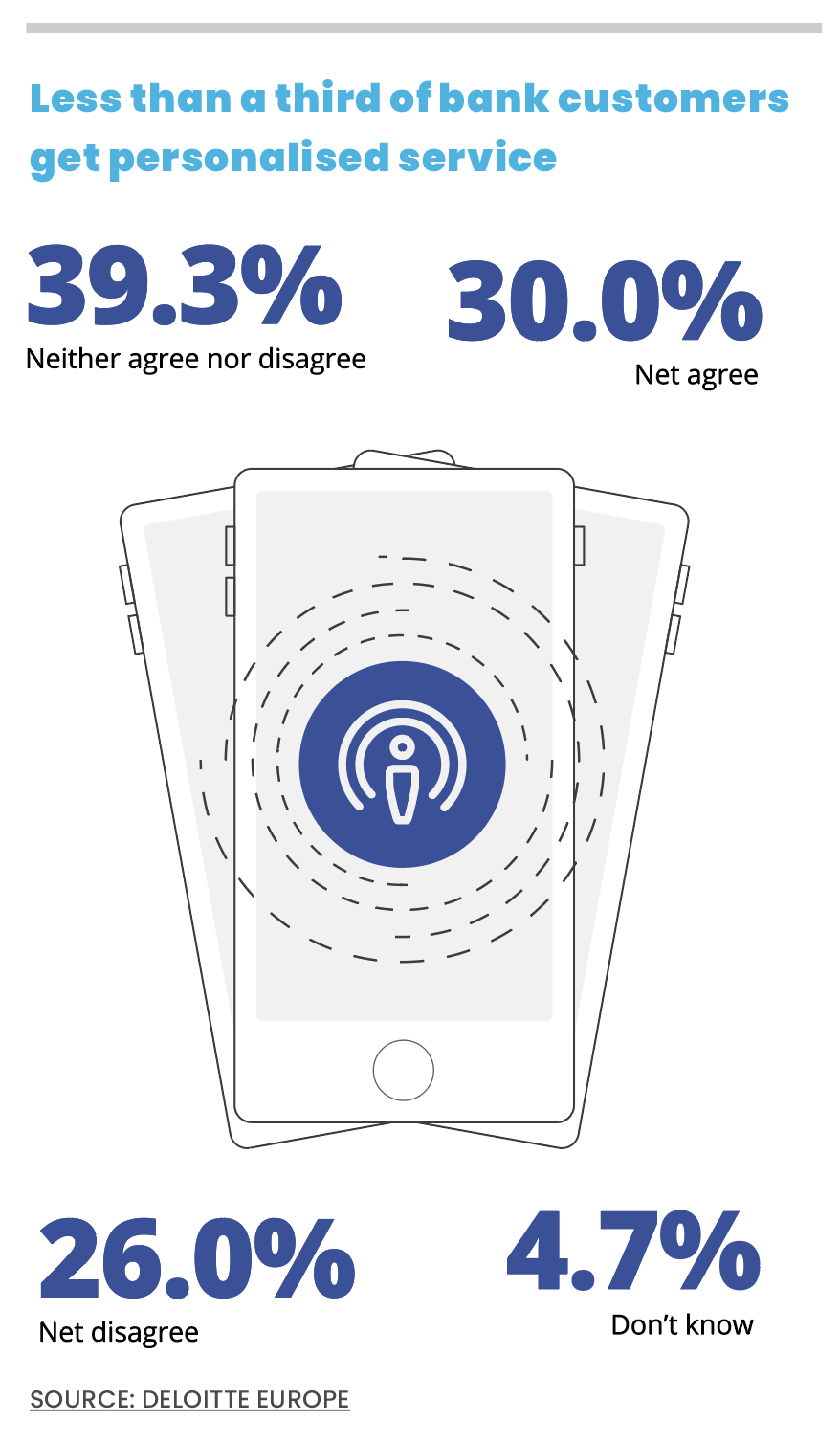 By now, we all accept the digitisation narrative, and the fact that the current pandemic has put the foot on the accelerator for digital.

Most recently, Morgan Stanley has predicted that almost one dollar in four of US spending will be online this year – double the amount seen in 2019 – and digital-only bank Revolut said it was onboarding 8,000 new customers a month in its mid-year update.

November 2020 research from the FIDO Alliance shows that two-thirds of UK consumers are fed up with having to enter passwords for online payments, highlighting the major problem with securing transactions online at a time when fraud is rocketing.

Doubts about online security are just one of the many challenges high-street banks face as they seek to digitise.

As Michael Cohen, Vice President of Operations at MyChargeBack puts it, “incumbent banks have been gradually developing their digital banking services while retaining their branches. But that’s not good enough for increasing segments of the [consumer] population.”

“The rate at which banks are downsizing suggests a lack of strategic clarity.”

Put simply, the pace of change in payments and banking is so rapid that most retail banks are struggling to keep up. Although they have been reducing branch networks rapidly, retail banks are under attack on so many fronts that their existence is under threat.

Estimates of how many retail banks will still be around in Europe vary depending on who you speak to, with Bain and Company estimating a quarter of retail banks could be gone by 2030, while CapGemini put this figure as high as 35 percent.

It’s easy to say that banks were previously inefficient and ridden with unnecessary costs – but the scale at which they are downsizing also suggests a lack of strategic clarity.

When it comes to payments, retailers, Big Tech players and the Asian giants WeChat and AliPay are all attacking banks’ established positions, while their customer share in current accounts is under pressure from digital-only neo-banks.

In perhaps the worst news for banks, their market share in more profitable lines like mortgages and insurance are also being threatened by digital fintech specialists like intelligus and Motus.

Today, their market share is around sixty percent globally – and the fees they charge have plummeted, even as the size of the market has grown.

Basically, banks have been out-manoeuvred by specialists and FinTechs – and the same could soon happen across many other product lines.

That banks need to digitise – and do so quickly – is a given. It’s also a commonplace to say it’s not enough if banks simply offer a digital version of their physical services.

In today’s environment, consumers need services created, not just tailored, for the online world. The latest information available suggests that consumers are becoming increasingly disenchanted with some aspects of their digital experience.

For instance, rising fraud and false claims made by consumers (up by nearly a third this year, according to digital experience firm Ethoca) have swamped banks’ dispute resolution departments and led to rising consumer dissatisfaction.

As part of their digitisation process, banks should be looking at how they can use the rich data from digital channels to improve the range and quality of service they offer customers.

New research from Deloitte UK suggests that less than a third of retail banking customers feel their bank offers them personal services.

As Deloitte Partner Margaret Doyle points out, “from a profitability point of view, connected customers are more than twice as valuable as satisfied customers.”

This advice applies both to digital-only banks and established bricks-and-mortar players. Both segments face a similar challenge of growing revenues and profitability in the years ahead – and the only way to do that is to offer superior products and, above all, improved levels of customer service. 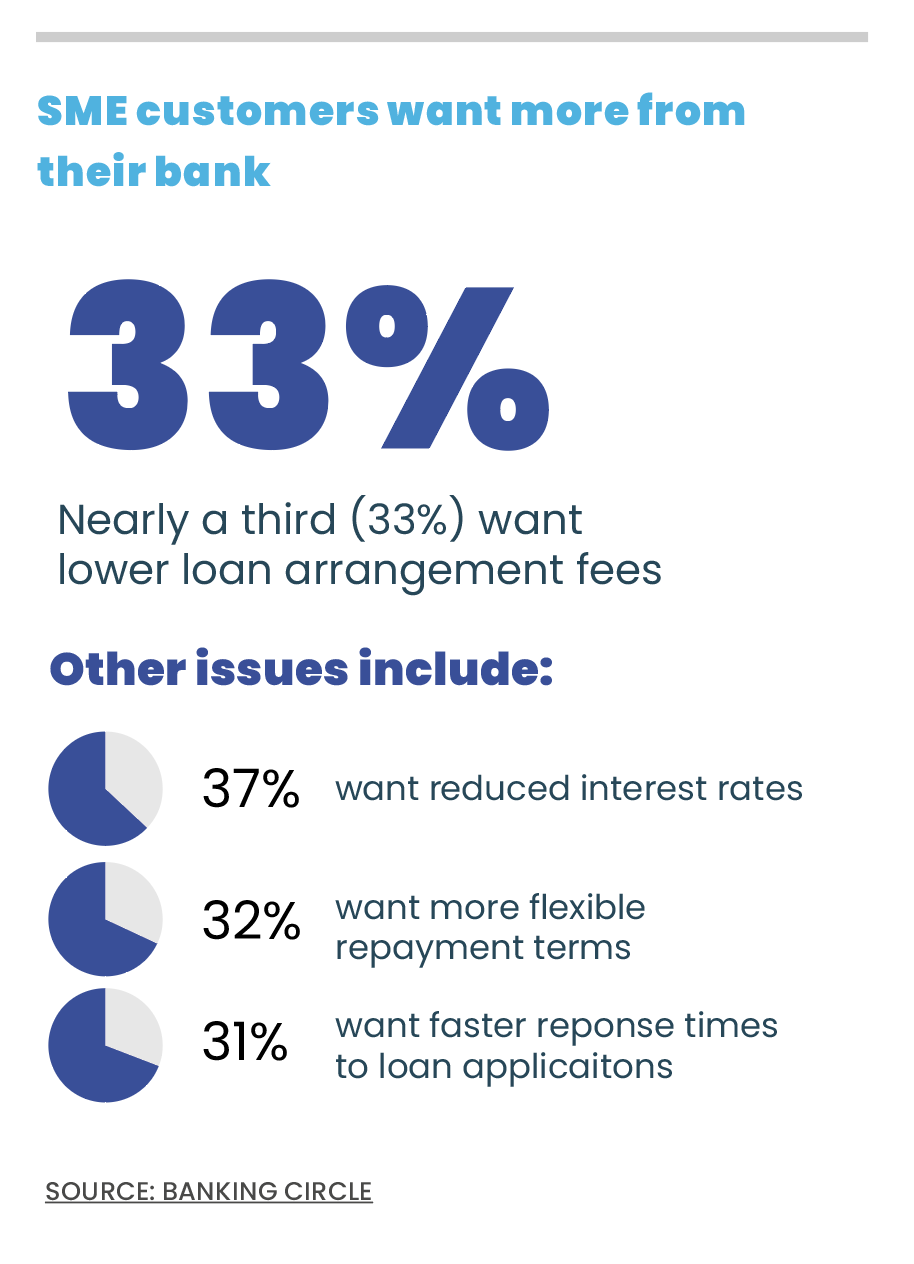 If things aren’t great for banks in terms of consumer satisfaction, then they’re not much better when it comes to corporate customers – especially the small and medium enterprises (SMEs) that make up around sixty percent by numbers of any banks’ corporate customer base.

A new study from Banking Circle shows that almost half (47.5 percent) of Europe’s SMEs have looked elsewhere for banking products that better suit their needs; while nine in ten SMEs were happy with their core bank account, they found the interest rates charged by banks, high arrangement fees and poor flexibility to be problematic.

Despite these unsettling findings, only half of the institutions Banking Circle spoke to said they found the shift to digital to be problematic, and two-thirds believe they are keeping pace with technological change.

This suggests a certain degree of complacency on the part of banks, as does the finding that less than a third of banks said they had lost customer trust in recent years.

As Anders La Cour, CEO of Banking Circle, puts it in his preamble to their report, “Our survey reveals a significant gap between the needs and expectations [of SMEs] on the one hand, and the quality of advice and service they are receiving.”

Perhaps there’s a belief on the part of some banks that their customers have no other real option – yet such belief would be misguided.

Even if it’s true that new digital banks are often no better at customer service than traditional players, the real worry for banks has to come from nimble FinTechs eroding their market share in their most profitable lines.

Outside the example of money transfer cited above, FinTechs are now beginning to eat into banks’ market share and profits in other areas where banks have traditionally been the only option.

Take small business loans: Norwegian start-up Aprila was created to offer lending services to SMEs. Launched in 2018, the company has acquired 2,000 SME customers to date – and is targeting growth of 50 percent across 2020 to reach 3,500 customers by year end.

Per Christian Goller, CEO, says Aprila’s success comes down to some simple factors, such as targeting a previously unserved market: “70 percent of our customers had no access to financing before they joined us, so we’re creating a whole new market.

For the first time, these companies can secure loans on their business, and not on personal assets like houses.”

Time to straighten up

Banks may say times are tough for everyone; that they are grappling with enormous structural challenges, such as legacy technologies and an inherently large cost base.

Yet for decades, banking has been a richly profitable business, and the current wave of digital transformation – which has already reinvented the media and entertainment business – was being predicted for banks fifteen or twenty years ago.

It may well be that it’s too late for those banks already behind the curve when it comes to digitisation. For the rest, it’s time to see that digitising by itself isn’t enough.

If banks don’t see what digital means in terms of radically better customer service and a much broader product range, then it could well be chucking-out time for many of them.

The post 2021: make or break for banks – is there time left for them to change? appeared first on Payments Cards & Mobile.