eMarketer estimates sales will top $27 trillion in 2020, even as annual growth rates slow over the next few years. 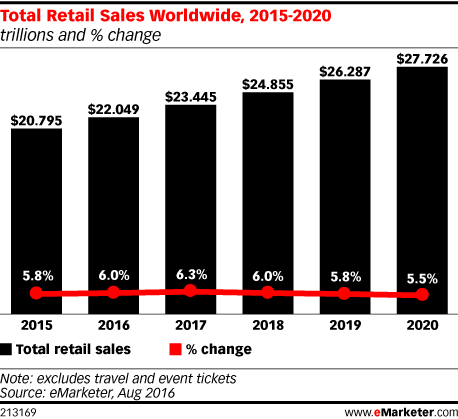 ecommerce retailers and transactions that occur over consumer-to-consumer (C2C) platforms such as eBay and other auction sites; and sales by motor vehicle and parts dealers and by gas stations. Travel, event ticket and restaurant sales are excluded from eMarketer’s forecast.

eMarketer has lowered its projections for overall retail sales since its previous forecast in December 2015, mainly due to low oil prices and negative currency effects. The US dollar has risen against most major currencies, and as a result the value of retail sales denominated in US dollars is down across all markets in eMarketer’s forecast. Persistent low oil prices also continue to have a profound effect on retail sales value in countries where gasoline takes up a large share of retail sales, including the US, the UK, Canada, France, Singapore and others.

sales) ordered via the internet over any device—will reach $1.915 trillion in 2016, accounting for 8.7% of total retail spending worldwide. While the pace of growth for overall retail sales is subdued, the digital portion of sales continues to expand rapidly, with a 23.7% growth rate forecast for 2016.

eMarketer expects retail ecommerce sales will increase to $4.058 trillion in 2020, making up 14.6% of total retail spending that year.

Asia-Pacific will remain the world’s largest retail ecommerce market throughout the forecast period, with sales expected to top $1 trillion in 2016 and more than double to $2.725 trillion by 2020. The region will also see the fastest rise in retail ecommerce sales, climbing 31.5% this year. Expanding middle classes, greater mobile and internet penetration, growing competition of ecommerce players and improving logistics and infrastructure will all fuel ecommerce growth in the region.

The bulk of retail ecommerce will come from China, where sales are expected to reach $899.09 billion this year, representing almost half (47.0%) of all such sales worldwide. While there is plenty of opportunity for growth, parts of Asia-Pacific are still faced with challenges. In Southeast Asia in particular, ecommerce still represents only a fraction of total retail sales. An underdeveloped digital payments infrastructure and a weak logistics framework have made these markets unprepared to handle high volumes of ecommerce orders and have kept ecommerce at a nascent stage.

Retail ecommerce sales in North America will rise 15.6% this year to reach $423.34 billion, maintaining the area’s status as the world’s second largest regional ecommerce market. The region will see consistent double-digit growth through 2020, fueled by increased spending from existing digital buyers, expansion into new categories such as grocery, and growing mcommerce sales.