The FinTech boom of the last 10 years has widely been regarded as a benefit to society and has changed the banking industry as we know it, but some customers of these new operators end up worse for their experience.

“If you put the results into the context that most of the FinTech companies claim that they use alternative data, it’s very surprising that their borrowers are more likely to default,” Di Maggio says.

Di Maggio and Yao tracked 3.79 million loans for 1.88 million borrowers using detailed national data from one of the three major credit reporting agencies over several years. This offered an in-depth look at borrowers that either used a FinTech company or a bank to obtain a personal loan. (A personal loan is an unsecured loan that is usually provided to consolidate existing higher-cost credit card debt.)

That’s a far more extensive sample of consumer credit behaviour than previous studies, which tend to focus on data from a single FinTech lender like LendingClub and provide no bank comparison. The authors then tracked performance of all borrowers’ loans from four months before the personal loan origination up to 15 months after.

In a nutshell, fintech borrowers who initially improved their credit scores by consolidating some of their credit card debt saw a deterioration in those scores months down the line as they began to use their credit lines to consume more goods, from purchasing a car to buying everyday items, the researchers found.

By a year after the FinTech loan, more than 5% were likely to default. That’s a 25% increase in risk of default compared to similar bank borrowers. 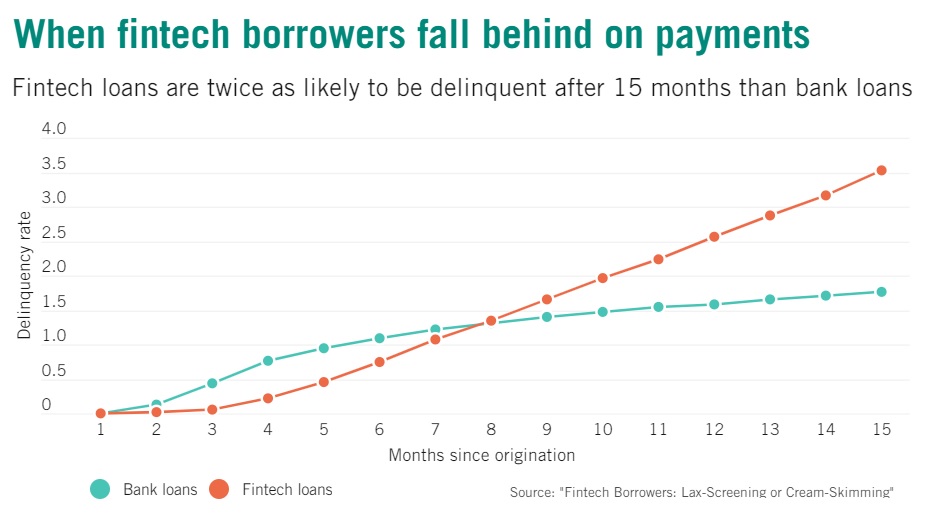 “FinTech borrowers only partially consolidate their debts, and then a few months down the line, they know that they have these credit cards that are empty and they start using them again,” Di Maggio says. “And so leverage starts ramping up again, but now they have to repay both the credit card debt and the personal loan, which cause their defaults to skyrocket.”

This type of behaviour is less likely among bank borrowers, suggesting that FinTechs attract a different type of loan-seeker—one with a higher propensity to overspend—which is not something easily captured in their credit reports.

The rise of FinTechs

FinTech lending’s popularity exploded in the years following the financial crisis a decade ago. A rising number of them originated $3.79 billion in loans in 2017, an eight-fold increase from 2013, the researchers note.

That surge, analysed before the onset of the pandemic, was expected to rise even more by the end of 2020, driven partly by the premise that FinTech companies can take advantage of being subject to less regulatory scrutiny and investors’ appetite for high yields. 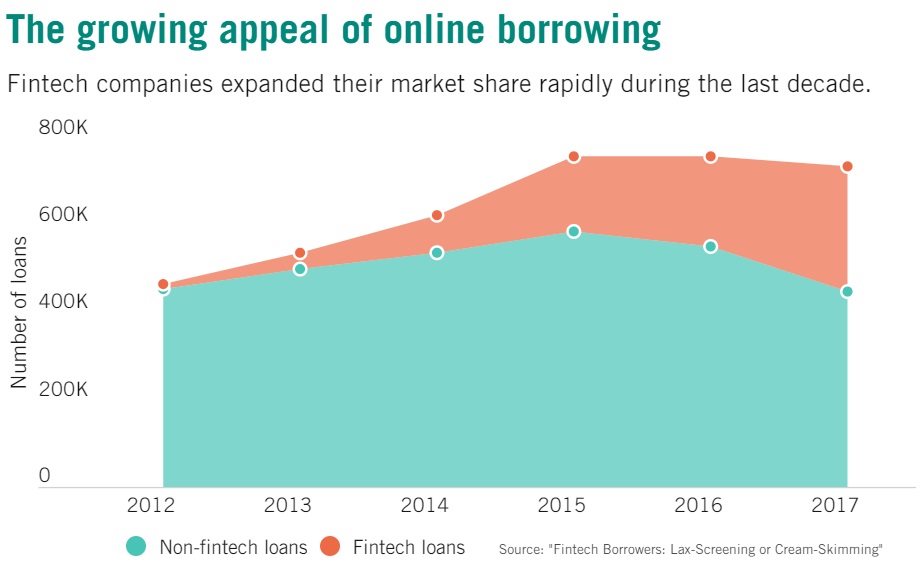 But even with more defaults, FinTech lenders weren’t likely to be hurt, in part because the companies charge higher rates commensurate with higher risk. Borrowers with “thin” credit files, for instance, were charged a premium of 5% more compared to what banks charge for similar borrowers, the researchers found.

But there’s an upside for FinTech lenders, too. Their borrowers tend to be loyal, take out more loans over time, and are apt to get additional credit when they need it most, such as after a job loss, research suggests. That presents a quandary for policymakers, Di Maggio says.

FinTech companies bundle loans and sell them to other investors, much like the real estate loans that helped propel the financial crisis.

A tool similar to the “ability to repay” requirement introduced by the Dodd-Frank Act for FinTech lenders might serve the industry well, Di Maggio suggests. The law “forced the banks to actually make sure that the borrowers will be able to repay their loans.”

“In the mortgage market, there are all these tests about debt-to-income ratios,” he says. “FinTech lenders that give you these types of unsecured debt are not forced to do something like this.”

FinTech companies, many of which have operated only during an economic boom, are likely to suffer now during the pandemic-induced historic recession as some borrowers struggle to repay and investors buying their loans become more difficult to find.

“Many low-profitability, high-risk lending companies that came up in the last few years will likely suffer quite a bit,” Di Maggio says. For those that were careful in their lending practices during the boom market, “there’s going to be an issue in that the liquidity on the investor side may dry up.”

The post Why their is a dark side to the expansion of FinTech borrowing appeared first on Payments Cards & Mobile.