Walmart like Amazon is moving itself further into traditional financial services provider territory, by expanding its money transfer operation to 200 countries 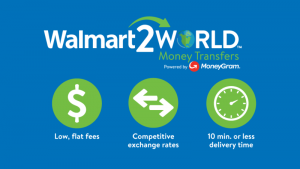 Through the new money transfer operation, people will be able to deliver money from Walmart’s nearly 5,000 US stores to locations abroad within 10 minutes.

As more consumers increasingly rely on Walmart and Amazon for their daily shopping, tie-ins to their finances are another way to keep customers on the companies’ websites and visiting their stores. Walmart first unveiled a money transfer service four years ago, allowing customers to send funds between its stores, and aiming to reach the “underbanked” — about 27% of Americans have limited access to traditional banking, according to the Federal Deposit Insurance Corporation.

Walmart claims it has saved customers $700m in fees because it charges cheaper rates.  The retailer has partnered with MoneyGram, one of the big wire transfer groups, to expand globally this month. The service will allow US residents to send money to countries such as Mexico, which received nearly $30bn in remittances last year, according to Mexico’s central bank.

Customers will pay $4 to send up to $50, $8 to send up to $1,000, and $16 to send up to $2,500. Money can be delivered to MoneyGram’s agent locations in 200 countries, or an international bank or mobile wallet account.  Walmart’s push into money transfers comes a few months after it announced it was partnering with PayActiv and Even, two financial-technology firms, to offer its 1.4m US employees tools for money management and on-demand access to their earned wages.

The moves suggest the retailer may see itself as a partner of the big financial services companies rather than a direct rival going head to head with basic products such as checking accounts or credit cards. Amazon, too, may be on a similar path: it is discussing a potential partnership to offer its customers bank accounts via JPMorgan Chase, in a deal that could unite the US’s biggest e-commerce platform with the country’s biggest bank.