After a decade of lobbying to gain local access to the $124 trillion Chinese payments market, Visa and Mastercard have been snubbed by China’s central bank which has refused to acknowledge applications submitted the payments networks which would allow them to process renminbi payments, despite rules in 2017 that removed formal obstacles to foreign participation in the market. 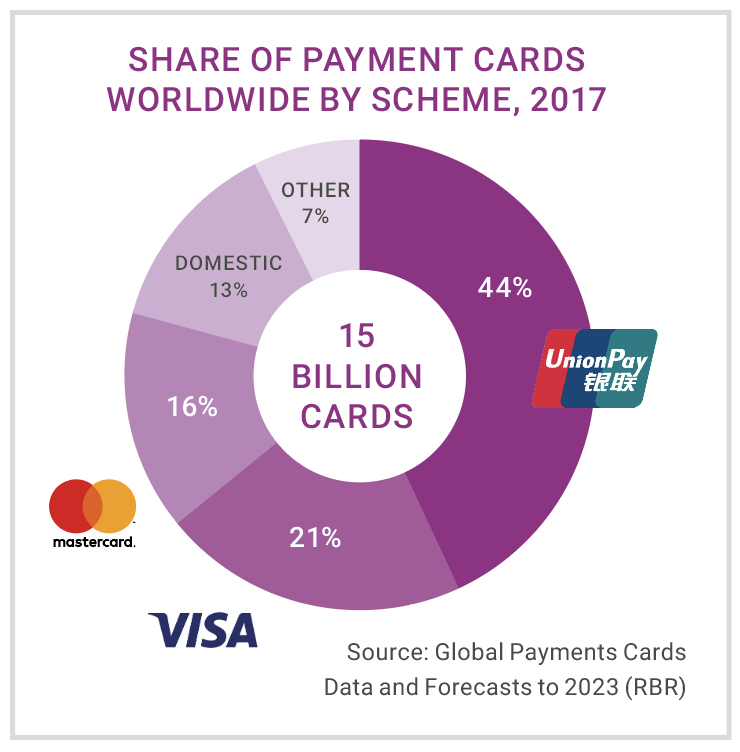 Although Visa and Mastercard submitted applications to the People’s Bank of China more than a year ago, the PBoC has not formally acknowledged these submissions, according to people familiar with the application process. China’s refusal to process the applications could cause additional tension in trade negotiations between Washington and Beijing, which are reaching a critical juncture ahead of a March 2 deadline to strike a deal or face a new escalation in tariffs – according to the FT.

The US has been trying to secure greater market access for American financial services companies, along with other changes to Chinese economic policy, like curbing the forced transfer of technology.

In a typical Chinese permissions process, formal acceptance and acknowledgement is the initial step towards approval. According to the application procedure published in 2017, the central bank must decide on applications within 90 days of acknowledgement.

“It’s a funny spin on World Trade Organization compliance. Yes, China will have due process for the application once they’ve accepted it, but no one ever thought it would be possible not to accept the application,” said one of the people familiar.

In November, American Express became the first foreign card scheme to win initial approval from the central bank to establish a renminbi bank-card clearing company. But Amex’s approval raised eyebrows because the new entity is a 50-50 joint venture with a Chinese partner, even though the rules permit wholly foreign-owned ventures.

Reuters reported in November 2017 that China was pressuring Visa and Mastercard to operate through joint ventures. But an executive at a major foreign card operator said the PBoC had not explained its refusal to process the company’s application.

“One could suspect that it’s because of the trade war, but then again American Express was approved. Somebody said, ‘Well Amex is smaller, so there’s less impact to the market,’ but nobody really knows,” he said. “There are a lot of variables. We are communicating with the central bank on and off, but there’s no clear reason.”

Visa and Mastercard’s efforts to enter China date back at least a decade. The WTO ruled in 2012 that China discriminates against foreign payment providers, nearly two years after the US government filed the complaint.  In October 2014, China’s cabinet declared that it would open the market to foreign players. The cabinet published a more specific market entry framework six months later, and the PBoC followed up with rules governing bank-card clearing companies in 2016.

In June 2017, nearly five years after the WTO ruling, PBoC issued the application procedure for establishing such a business. Visa submitted its application in July 2017 and Mastercard followed suit later that year.

The PBoC is the largest shareholder in China Unionpay, which maintains a de facto monopoly on renminbi bank-card payments in China. Visa, Mastercard and American Express have partnerships with Chinese commercial banks to issue foreign-branded credit cards, but they are only usable for foreign-currency payments.

Chinese customers use such cards for international travel, but most domestic merchants do not accept them.  Unionpay’s dominance in China helped it earn a 36% market share globally in bank card payments, compared to 32% for Visa and 20% for Mastercard, according to RBR.

Unionpay has sought to expand its international business in recent years, first in emerging markets and more recently in Europe.  Chinese payment card transactions totalled Rmb848 billion ($124 billion) in the year to September 30 2018, up 11.5% from a year earlier, according to PBoC data.

The post Visa and Mastercard left out in cold as Chinese Central Bank refuses to process application appeared first on Payments Cards & Mobile.