US moves in as Bitcoin king after China ban on crypto

Two months after Beijing banned crypto mining this year, new data has revealed that the US has overtaken China as the world’s biggest source of bitcoin mining.

China’s share of the global hashrate — the computational power required to create bitcoin — fell from 44% to zero between May and July, showed figures published by the Cambridge Centre for Alternative Finance.

The company suspended its operations in China, which it had been winding down since October 2020, after the prohibition. 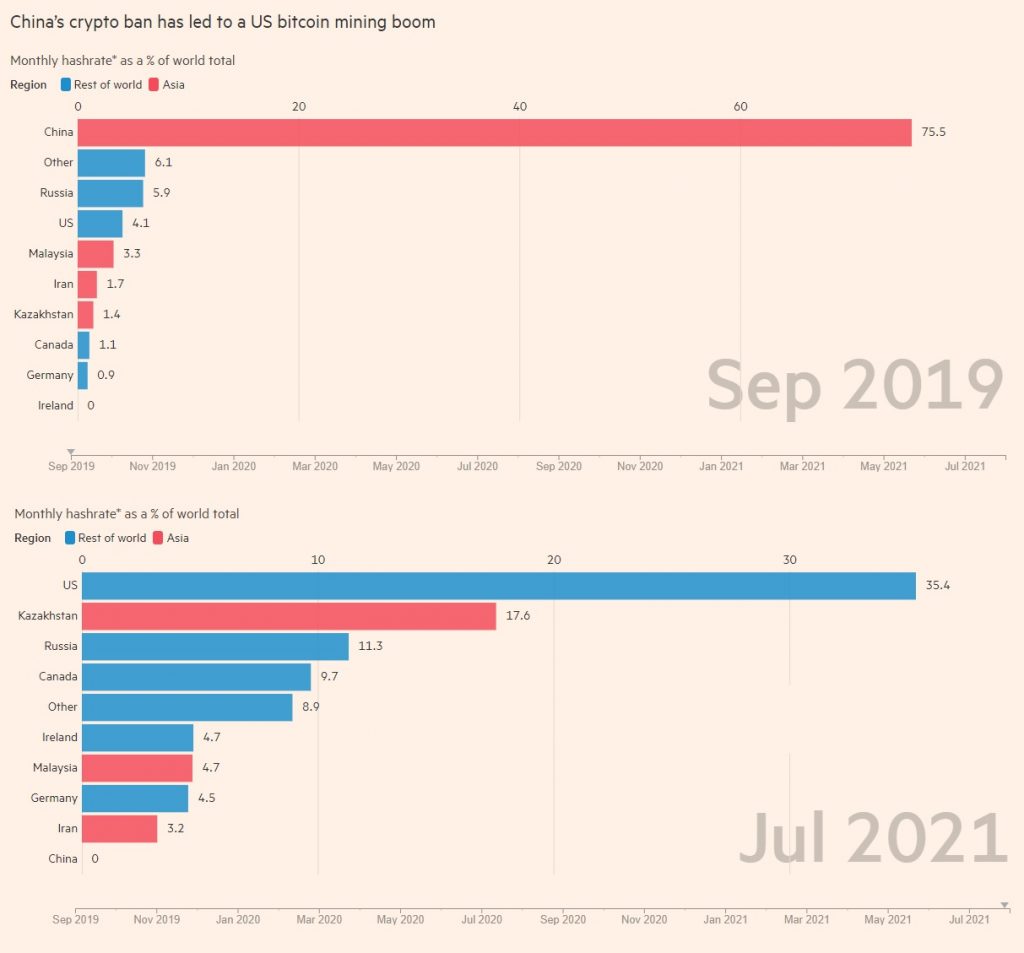 Michel Rauchs, digital assets lead at the closely watched Cambridge tracker, noted that “the effect of the Chinese crackdown is an increased geographic distribution of hashrate across the world”, adding that it could be seen as “a positive development for network security and the decentralised principles of bitcoin”.

Miners outside China enjoyed a digital coin minting spree in the months following the ban, as Chinese competitors hurried to relocate their operations.

Beijing has since gone further, labelling all crypto-related activities “illegal” last month, extending its prohibition to include foreign operators.

China is rolling out its own digital currency, which authorities hope to trial at the Beijing Winter Olympics in February 2022.

On average, 900 bitcoin are mined every day by machines that race to solve complex computational mathematical problems that unlock new digital coins.

Between July and September, Marathon Digital Holdings produced 1,252.4 minted coins, 91% more than the previous quarter. But competition has intensified as Chinese miners settled in to new locations, notably Kazakhstan.

But the scattered miners have also faced roadblocks in their new homes, underscoring the challenges for digital currency companies in identifying predictable policy environments as concerns mount about financial oversight of the sector.

Didar Bekbauov, co-founder of Xive, an Almaty-based cryptocurrency mining platform, said that “immediately after the ban, Kazakhstan received a lot of mining machines, mostly from Chinese miners who wanted to restart operations as soon as possible”. Authorities have blamed the exiled crypto hunters for recent energy shortages, slapping power-hungry miners with surcharges for electricity use.

Parts of this article first appeared in the FT

The post US moves in as Bitcoin king after China ban on crypto appeared first on Payments Cards & Mobile.