US mobile cheque deposit on the rise 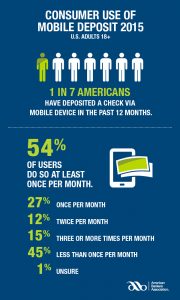 The annual survey of 1,000 US adults was conducted for ABA by Ipsos Public Affairs, an independent market research firm, July 8-13, 2015.  This is the second year the question was asked as part of ABA’s annual survey. ​

15% of consumers replied “yes” when asked “In the past twelve months, have you deposited a check into your bank account by taking a picture of the check with your mobile device?” (82% said they have not, while 3% were unsure).  Those who responded yes provided the following responses when asked “How often?”:

While the overall number of mobile deposit users increased this year, the number of people who utilized the feature at least once per month declined from 80% to 54%.  Feddis noted that decreased use of checks—due in part to increases in direct deposit and electronic payments—likely contributed to this change.

“People are receiving checks less frequently, but when they do they’re increasingly turning to mobile banking to deposit them,” said Feddis. “Mobile has become a bigger part of how people interact with their bank, and we expect banks to continue to expand and enhance customer services available through mobile devices.”

The post US mobile cheque deposit on the rise appeared first on Payments Cards & Mobile.