US e-commerce market slowing with growth slipping to 6.4%

US e-commerce retail sales grew significantly slower year over year in January 2020 than in December and for 2019 overall, according to the U.S. Department of Commerce advance monthly figures. 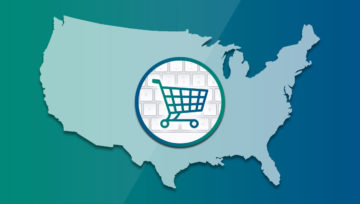 US e-commerce market slowing with growth slips to 6.4%

Last month, nonstore spending, excluding estimated fuel sales, increased just 6.4%, achieving only about a quarter of December’s record-breaking 24.2% increase and less than half of the 13.9% jump registered in 2019. E-commerce performance in January 2020 also rose at the slowest year-over-year rate for the month in six years and was more sluggish than the 11.6% growth in January 2018.

The Commerce Department’s nonstore sales (e-commerce) – defined as mainly online but include other such sales as orders through call centres, catalogues, door-to-door visits and vending machines – don’t align perfectly with spending captured in the pure e-commerce figures that the agency releases quarterly. But the data is an early indicator of trends in the online sector.

In January, non-store sales represented just under half (49.2%) of all retail gains, excluding the estimated sales of fuel. This segment typically accounts for two-thirds and sometimes even hovers around three-quarters of spending increases across all channels, so the drop in share is noteworthy.

Total retail sales through all channels increased just 2.5% year over year last month without fuel, nearly half of the 4.9% increase in January 2019. In December 2019, the uptick in all retail spending reached an impressive 6.3%, which was revised down from initial Commerce Department figures, and helped to close out the year with 3.8% growth in total retail sales.

According to Commerce Department data, overall sales were down year over year for a number of merchandise categories: electronics and appliances, health and personal care, sporting goods, and hardware and home improvement. General merchandise stores did well despite a 3.9% decline in the sales of one subcategory -department stores – suggesting superstores, warehouse clubs and dollar stores more than offset the flagging purchases made through old-school retailers. Clothing and accessories sales were relatively flat, with a 0.7% dip.

Meanwhile in Brazil The Brazilian Electronic Commerce Association has estimated that e-commerce sales in Brazil should reach a of 18% growth this year compared to 2019.

E-commerce sales in Brazil should reach 106 billion reais ($24.6 billion) in 2020, the equivalent of 18% growth in relation to 2019. Marketplaces should be the main driver for the predicted increase, accounting for 38% of all orders placed online. Purchases through smartphones should represent 37% of all e-commerce transactions. According to The Brazilian Electronic Commerce Association (ABComm), there should be about 135,000 e-commerce businesses operating in Brazil by the end of 2020. These will be mainly micro and small companies.

If the trade body’s forecast is confirmed, 2020 will be the first year e-commerce revenue in Brazil will exceed the 100 billion reais mark. While large players such as Brazil tend to pave the way when it comes to broadening access to e-commerce, there are bottlenecks to e-commerce in the region, such as slow customs clearance, congestion and sub-standard infrastructure for last-mile delivery, in addition to the complexity of reverse logistics processes for returns.

The post US e-commerce market slowing with growth slipping to 6.4% appeared first on Payments Cards & Mobile.