US credit card debt has hit a new record of $870 billion as of December 2018, according to the data from the Federal Reserve. Credit card balances rose by $26 billion from the prior quarter.

Nearly 480 million credit cards are now in circulation, up by more than 100 million since hitting bottom after the recession a decade ago according to Bloomberg.

At the end of last year, credit cards were the fourth-largest portion of consumer debt in the US after mortgage, student loan and auto debt. But the quarterly increase in credit card debt was faster than the other categories. Overall debt reached a record $13.5 trillion. 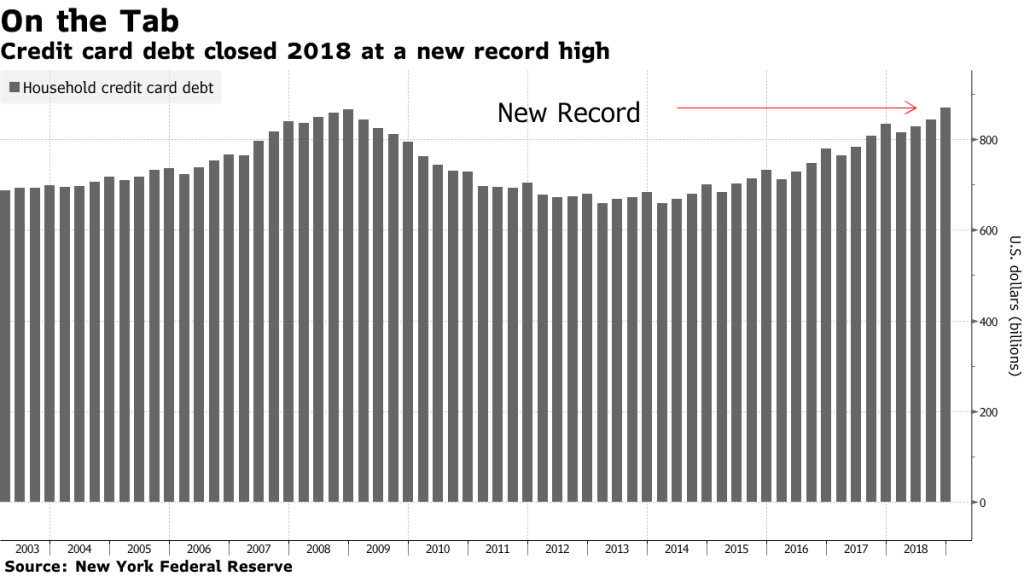 About 37 million credit card accounts had a 90+ days delinquent mark added to their credit report last quarter, an increase of about two million from the fourth quarter of 2017. These 37 million accounts hold roughly $68 billion in debt that is 90-plus days delinquent.

In aggregate, credit card limits rose for the 24th consecutive quarter, with a 1.5% increase in the fourth quarter of 2018.

No Shortage of Credit

Older Americans are holding a significant portion of credit card debt, with those over age 60 accounting for about 30%of the total.

One possible trouble spot is that, by age group, older Americans are seeing their credit card debt transition into the delinquency category at an increasing pace. In particular, those in their 50s have seen the most rapid change and could be considered the most vulnerable should a change occur in their employment.

An analysis of data compiled by Bloomberg on credit card asset-backed securities based on the cash flow stream of pooled credit card accounts found the block issued in August 2015 has the highest delinquency rate, exceeding 6%.