New research shows that spending on payment cards continues to grow strongly, expenditure rose by 13% to reach $35 trillion in 2019. 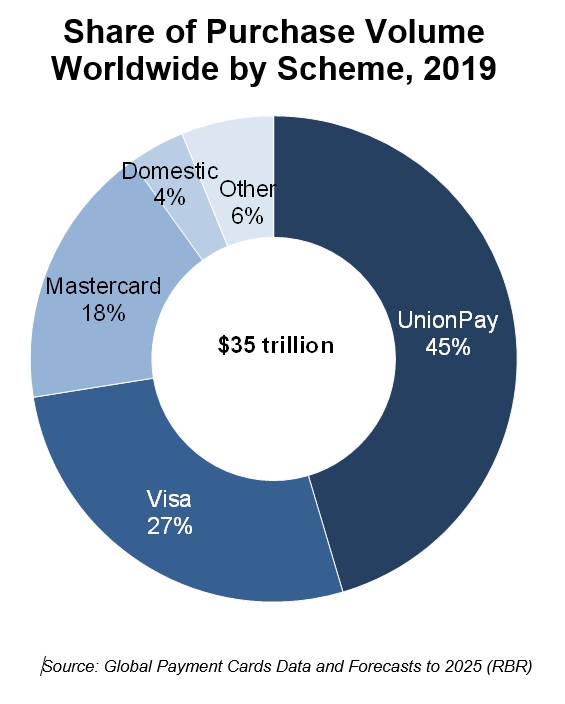 There were a number of factors driving this impressive growth; in developing countries, government financial inclusion initiatives continue to encourage people to open bank accounts for the first time. In more mature markets, contactless is hastening moves away from use of cash, a trend which COVID-19 has accelerated in 2020, due to health and hygiene concerns.

UnionPay has the largest share of global card expenditure, with 45%. This is largely driven by spending in China, the world’s largest market, where UnionPay accounts for 93% of the total. The report shows that spending on Chinese cards has continued to rise. The main reason for this is that debit cards, which have historically been used primarily for cash withdrawals, are increasingly being used for everyday payments.

Visa (including its sub-brands Visa Electron, V PAY and Interlink) and Mastercard (including Maestro and Mastercard Electronic) are the second and third largest schemes worldwide with 27% and 18% respectively.

However, the analysis shows that if China is excluded, the picture is significantly different – Visa is then the largest scheme with 39%, followed by Mastercard with 32%. UnionPay only has 1% of non-Chinese expenditure, highlighting the massive influence China has on global market shares.

Domestic schemes’ share rose slightly to 4%. Whilst such schemes remain relatively rare, they are growing fairly quickly, particularly in markets where new domestic schemes have been launched with backing from governments, such as Russia and India. Iran also operates a large domestic scheme, as international sanctions mean that cards issued in the country are domestic-only.

The rise of e-commerce for international schemes

As card expenditure returns to strong growth after COVID-19, it remains to be seen exactly how the schemes perform in relation to each other. “There is still potential for growth in China, and therefore for UnionPay, as more consumers from rural areas enter the banking system,” notes Daniel Dawson, who authored the report Global Payment Cards Data and Forecasts to 2025. “Meanwhile, the rise of e-commerce will provide more opportunities for international schemes more generally.”