Our research prepared with Dealroom for the Digital Economy Council shows that between January and December, UK companies secured a third of the £30.4 billion raised in Europe during 2019, with UK-based tech firms receiving more VC investment than Germany (£5.4 billion) and France (£3.4 billion) combined.

The number of rapidly growing UK tech companies soared as venture capital investment increased by 44% in 2019. Growth in VC investment exceeded 40% for the third year in a row. To put this growth into perspective, investments in France grew by a little over a third compared to 2018, while Israel’s investments rose by a fifth.

On a global scale, the UK’s performance in 2019 means it now sits behind only the US and China in terms of total venture capital funding received in 2019 and on a city-level, London joins the Bay Area, Beijing and New York at the top of the world’s most-funded locations. Companies headquartered in London raised £7.4 billion during 2019.

Almost half of the UK investments (£4.6 billion) in 2019 came via US and Asian investors and the UK tech sector recently overtook the US for foreign investment per capita. What’s more, when compared to Germany and France, the UK had the widest overall mix of foreign versus domestic investors.

While eight more billion-dollar companies or unicorns were created in the UK in 2019 – taking the total number based in the UK to 77 –  the amount being invested in early-stage companies increased, reaching £3.9 billion in 2019 up from £3 billion the year before.

“In 2019 the UK secured a formidable 33% of all European Tech investment, at £10.1 billion, despite accounting for roughly 9% of Europe’s population,” says Gerard Grech, Chief executive, Tech Nation. “Equally exciting is the rapid expansion of digital tech growth across the UK regions, which augurs well for national GDP growth and a truly connected Britain.” 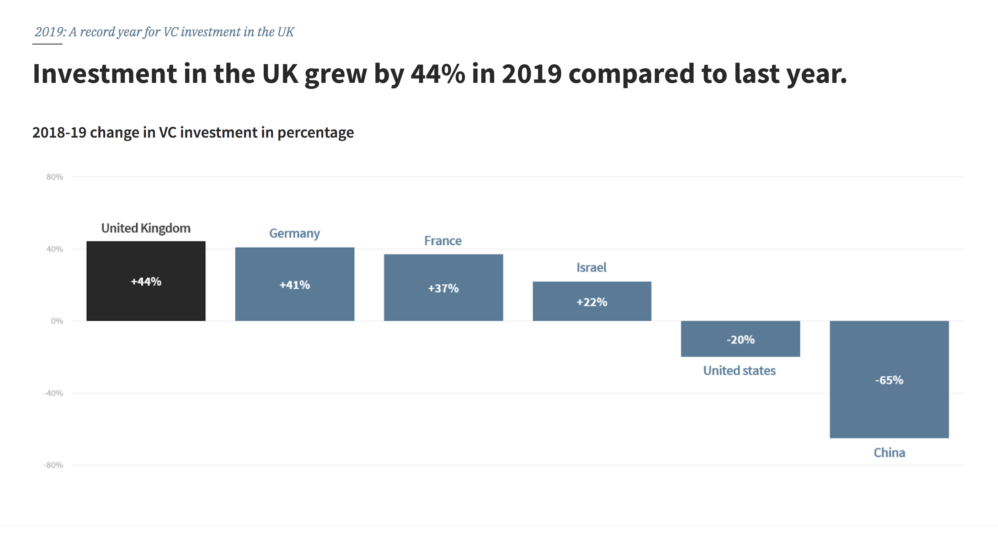 2019 saw the number of early-stage investment rounds grow by 20% year-on-year, while among more mature companies, a total of £4.1 billion was invested in rounds exceeding $100 million in 2019 – more than twice the amount invested in such rounds during the same period last year.

Of the highest-value UK rounds, five companies raised more than $250 million each, and three of those exceeded $500 million in a single round.

2019 saw one of the UK’s largest ever Series A investments, made in payments processor Checkout.com ($230 million) in May, and the largest UK round of all time, which saw $800 million being invested in supply-chain FinTech Greensill in October just five months after the company had raised $655 million.

The unicorn capital of Europe

Since 2014, the UK has produced more than twice the total number of $1 billion tech companies than any other country in Europe, and sits behind only the US and China when it comes to building fast-growing global firms. 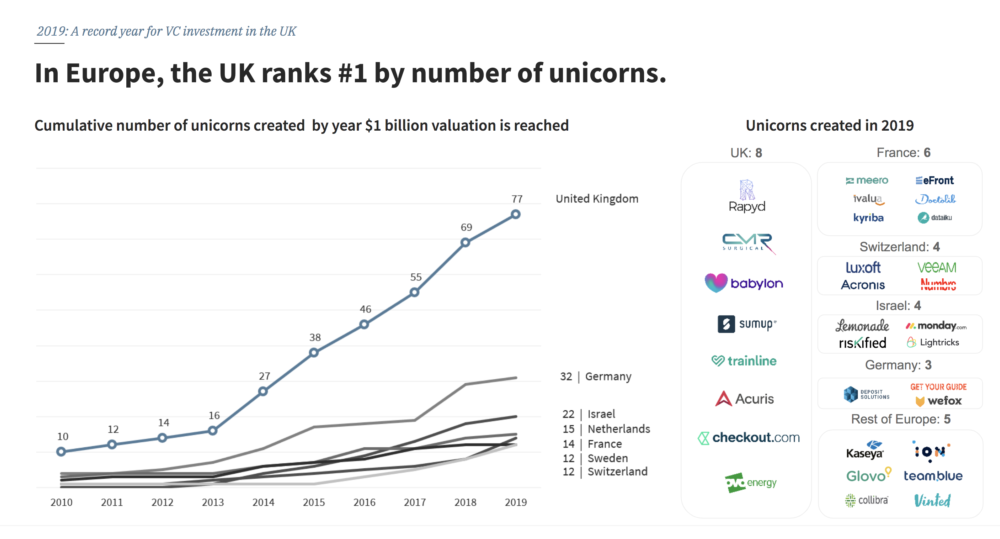 The UK leads the way in FinTech

The UK’s success in attracting venture capital investment in 2019 also fuelled, in part, a surge in the UK’s best performing sectors – fintech, AI and deep tech, and clean energy.

Again, when compared with Germany and France, UK FinTech firms raised £4.1 billion last year – an impressive 7.5 times the amount raised by French FinTechs, and three times as much as FinTech firms in Germany.

This figure represents a 100% increase from 2018’s total of £2 billion, as a result of both the Greensill and Checkout.com investments plus significant fundraises from the likes of World Remit ($197 million), Monzo ($147 million) and Starling Bank ($98 million).

The post UK tech sector beats both US and China to lead global growth appeared first on Payments Cards & Mobile.