An all-time record 44 billion payments will be made in 2024, up 3.4 billion over 10 years, equating to 120 million payments per day. The increase will be driven by rises in card, internet and mobile banking payments, according to new research published by
Payments UK, the trade association for the payments industry. 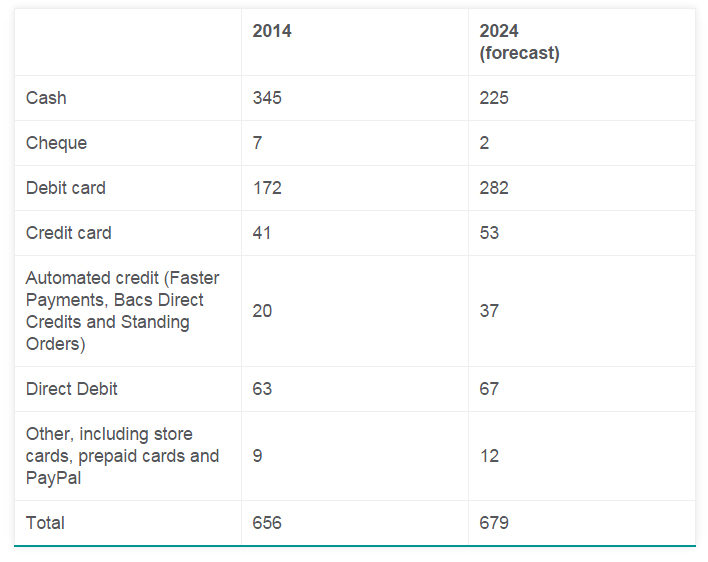 Number of annual consumer payments made per adult in UK

Cards (both debit and credit) accounted for 51% of the volume of non-cash payments in 2014, but by 2024 they are projected to account for 60% of non-cash transactions. Within this, the volume of debit card purchases is expected to grow from 9.2 billion in 2014 to 16.0 billion in 2024. In terms of percentage growth in payment volumes, the strongest growth over the next ten years will be experienced by one-off automated credits processed through the Faster Payments Service, which is forecast to nearly double by 2024.

Cash machines will remain the main method by which consumers acquire cash over the next 10 years. 2.5 billion cash machine withdrawals are forecast in 2024, with the value withdrawn predicted to rise from £189 billion in 2014, to a peak of £196 billion in 2019, before falling slightly to £192 billion in 2024.

The new analysis is published in UK Payment Markets 2015, which draws on recent and emerging developments to make forecasts for the future usage of all forms of payments by businesses, consumers and government.