More than one in seven free-to-use cash machines across the UK could start charging or be shut down if the row about the Link ATM network cannot be resolved, ATMIA has warned. 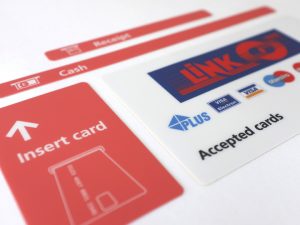 After a crucial meeting of the more than 30 members of the Link ATM network failed to reach an agreement over a new charging system, the ATM Industry Association (ATMIA) said 8,000 ATMs were at risk of being removed or starting to charge for withdrawals.

According to ATMIA, the cities most at risk of losing free cashpoints are London, Belfast, Glasgow, Birmingham, Sheffield and Cardiff. Other areas that could be hit hard include Devon, Hampshire, west Wales, Northern Ireland, Northumberland and Aberdeenshire.

Under the current system, 97% of withdrawals from cash machines do not incur a charge. Of the 70,000 cash machines across the UK, 16,000 charge for withdrawals and 54,000 are currently free to use. Of the free machines, some 23,600 are provided by independent suppliers.

According to the ATMIA’s estimates, around £14.7bn of the cash withdrawn each year would be affected by the 8,000 ATMs either closing or having charges imposed. It is not clear how much customers face being charged – the average fee paid by customers at machines that currently levy a fee is £1.70, with the average amount withdrawn is £69

Link is grappling with concerns among some members about the price they charge each other to allow their customers to withdraw cash. There are calls for this interchange fee to be reduced – although at Thursday’s meeting no decision was taken

ATMIA’s calculations are based on the impact of a cut to the interchange fee, which is calculated by dividing the cost of running the free-to-use network by the number of transactions.

“Independent cash machines play a vital role in allowing all of us convenient access to cash,” said Ron Delnevo, executive director for Europe of the ATMIA.

“With the question remaining over whether some banks will be willing to pay the true cost of providing ATMs, we still risk thousands of these cash points disappearing from the most vulnerable communities.

“Many of my independent members are now calling on the regulator and government to be part of the review process, and to ringfence existing ATM interchange to make sure the current free to use estate is not undermined,” he added. “This is key to securing the free access to cash that has so well served the public.”

Link did not comment directly on the ATMIA calculations but said a working group would be set up to find a solution. “While commercial perspectives may vary, every Link member was clear at the meeting that ensuring the future of the Link Network and the cash access needs of UK consumers remains their number one priority,” said John Howells, chief executive of Link.