UK Payments sector behind London being Fintech capital of Europe

Accenture reported in ‘The Boom in Global Fintech Investment’ that London “has become the Fintech capital of Europe.

Since 2004, the lion’s share of Europe’s Fintech deals and financing have taken place in 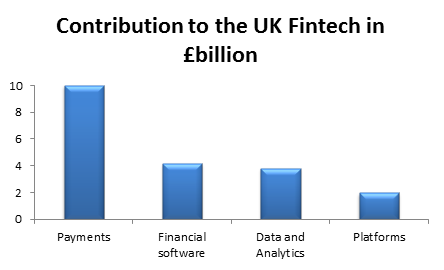 Contribution to UK Fintech in Billions

the UK with the vast majority occurring in London.” In November 2014, promoting the Fintech sector in Singapore, the Mayor of London hailed the city’s success in this sphere, revealing new figures that indicate London is a world leader in financial technology and driving innovation that is changing the face of the financial services industry, with investment tripling into London-based FinTech firms.

However, within all this acclaim for Fintech as a whole, the fact that the payments sector makes up half of this financially is rarely mentioned. According to the UKTI report ‘Landscaping UK Fintech’, the payment sector contributes a massive £10bn to the UK Fintech sector.

So how significant exactly is Payments in the UK Fintech market? The proportions are overwhelming when they are put visually:

Payments is not only half of the market but also, again according to the UKTI report, it is more than double the size of the second largest sector. But it is not receiving the recognition from national and local government that its success and contribution to the London deserves.

The payments sector and its innovation is making a massive contribution, not just to FinTech but to the UK economy but while it is forever wrapped up within Fintech reports and data, this will continue to gain far less appreciation than it should.

Now imagine if the value of payments was reported on its own – it would be widely acclaimed as a hugely successful business in its own right! Putting £10billion in perspective; this is how much the Ukraine needs to keep it from collapsing, and is more than Greece is currently asking for to bail-out its economy!

This is part of the reason why large-scale international gatherings such as the PayExpo event are so critical not only to continuing to facilitate the growth of the UK payments industry, but to draw attention to the significance of the sector.

Over the last few years alone payments technology and innovation has completed overhauled how transactions are done to – now imagine what can be achieved if the sector had more support when faced with restrictive legislation and regulation, and increased investment from national government and from the City…