UK credit lenders prepare for lack of lending in 2019

A new survey released by the Bank of England shows dire trading conditions for British banks and credit lenders as they gear down on expectations that consumer appetite for borrowing will dry up in Q1 2019 as a weak economic outlook and the Brexit impasse keeps households from taking on new borrowing.

The survey of major British credit lenders found that more predicted that demand for credit card lending would fall during the first quarter of the year than during the financial crisis. The survey added to a growing body of evidence that political turmoil in Westminster is having a chilling effect on the economy, with the uncertainty leading businesses and consumers to hold off from making major financial decisions. 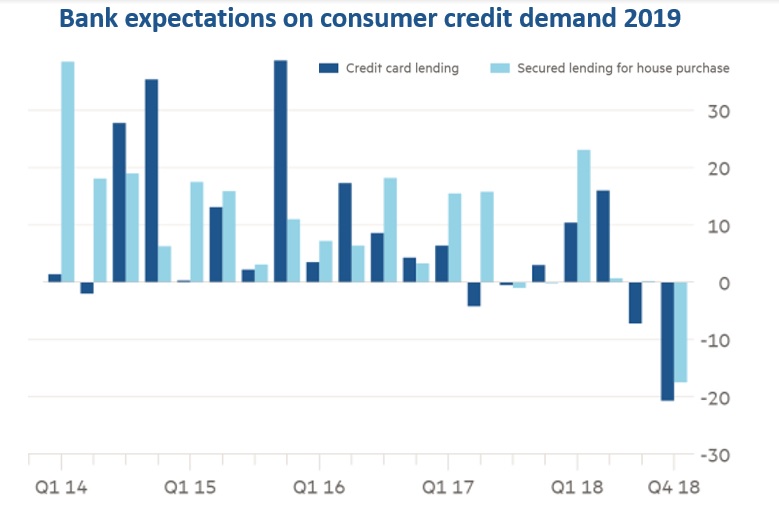 A net balance of 20.7% of lenders said credit card borrowing would slow over the next three months, a record high for the survey, which began in 2007. Meanwhile, a net 17.5% of British lenders said they expected mortgage demand to fall during the first quarter of 2019, the highest percentage since Q4 2010.

Cheap credit has helped to support UK economic growth since the Brexit referendum as households borrowed to fund spending. However, the survey data suggest lenders expect this to come to an end as the uncertainty leads households and businesses to re-asses.

The decline in demand for credit comes despite an analysis published by BoE economists on the bank’s staff blog on saying that UK household debt levels are “sustainable”. Lewis Kirkham and Stephen Burgess, two economists working at the central bank, argued that borrowing was lower than expected given the relatively low level of interest rates, which reduces the cost of loans – according to the FT.