According to the KrebsOnSecurity blog, ATM skimming attacks have focused on innovative fraud devices made to attach to the outside of compromised ATMs via a black box attack. Security experts are now warning about the emergence of a new class of skimming scams aimed at draining ATM cash deposits via a novel and complex attack. 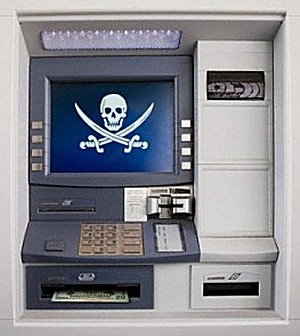 crooks gain physical access to the top of the cash machine. From there, the attackers are able to disconnect the ATM’s cash dispenser from the “core” (the computer and brains of the device), and then connect their own computer that can be used to issue commands forcing the dispenser to spit out cash.

In this particular attack, the thieves included an additional step: They plugged into the controller a USB-based circuit board that NCR believes was designed to fool the ATM’s core into thinking it was still connected to the cash dispenser.

“They didn’t have to do this [to get away with the money] but our guess is they thought this component would buy them some time,” before the ATM’s owners figured out something was wrong, said Charlie Harrow, solutions manager for global security at NCR.

NCR says the crooks then attached a smart phone (a virgin, out-of-the-box Samsung Galaxy 4), which they used as a conduit through which to send commands to the cash dispenser remotely. According to Harrow, the mobile phone was set up to relay commands through a dynamic IP service.

“Which meant that the real attacker sending the commands was somewhere remote from the ATM,” Harrow said.

Why would the ATM thieves set it up so that the dispense commands could only be issued remotely, when co-conspirators would still need to be present at the hacked cash machine to retrieve the money? Harrow believes it’s so that the boss running the crime operation can call the shots.

“There is no honor among thieves, and these guys will delegate responsibility,” Harrow observed. “That way, you have the Mr. Big back at the hideout who’s sending the commands, and the mules are the ones at the ATMs. So the mule who has the black box is unable to activate the attack unless he gets the command from the Mr. Big, and the mobile phone is the best way to do that.”

The mobile phone component also made it difficult for investigators to piece together how the attackers pushed commands through to the cash dispenser.

“The mobile phone was simply a pass-through for commands sent from the remote server, so we had no idea about commands being sent to the dispenser,” Harrow recalled. “It took us a while to figure out how they were doing this attack.”

NCR notes that black box attacks are one of two “logical” attacks seen so far against ATMs. The other type of logical attack uses malicious software that similarly “jackpots” the cash machine, forcing it to spit out cash. In both cases, the attacks are made possible because thieves are able to physically access the top part of the ATMs where the USB ports are located.

“It’s one of two logical attacks we have seen increasing in frequency,” said Owen Wild, NCR’s global marketing director, noting that the company has seen only two black box attacks so far, including this one. “So far we’ve seen far more malware attacks than black box attacks. The ATM malware attack is simpler because you don’t need hardware. But in principle, there’s no reason black box hacks couldn’t become more common.”

To help prevent the type of physical access that allows thieves to perpetrate logical attacks, NCR urges customers who plan to deploy cash machines in unattended areas to consider wall-mounted units as opposed to stand-alone units. The company also recently shipped a software update for its ATMs that strengthen the encryption used to manage communications between the cash dispenser and the ATM core. More importantly, the update changes the system so that the encryption key exchange between those two components is only done when the dispenser receives a specific authentication sequence.

“All things considered, this is a pretty cheap attack,” Harrow said. “If you know the right commands to send, it’s relatively simple to do. That’s why better authentication needs to be there.”

Harrow said the update also makes it so that the underlying firmware which powers the ATM core cannot be rolled back to previous versions of the firmware. According to Harrow, ATM thieves in Mexico did just that in a recent attack that tried to undo security upgrades that were bundled into a recent software update.