The value case for a tokenized central bank digital dollar

Last week the US House Committee on Financial Services held a virtual hearing about the Digital Dollar or central bank digital currency (CBDC).

The event promised to be interesting as two of the speakers hold contrasting positions on the topic. Morgan Ricks, a professor at Vanderbilt University Law School, has previously argued that a digital dollar should allow consumers to hold central bank accounts. In March, Congress released a raft of stimulus bills for COVID-19, and Ricks’ model of Fed Accounts made an appearance.

On the other side is Chris Giancarlo, former CFTC Chair and founder of the Digital Dollar Foundation, who has advocated for a tokenized digital dollar, likely based on blockchain or distributed ledger technology (DLT). The Digital Dollar Project was not involved in the drafting of the Congress bills. It released its first whitepaper last week, which makes the argument for tokenization.

The whitepaper argues the introduction of a tokenized dollar would be a driver of innovation for the broader financial system in a fundamental way. A tokenized digital dollar as a new financial medium, combined with new transactional infrastructure such as distributed ledger technology, would provide a new payment rail upon which central bank money can be sent and received.

To meaningfully expand upon existing capabilities, it should be portable, sent like a text, thereby allowing settlement irrespective of space and time. A tokenized digital dollar could play a crucial function in serving as the safest form of money and therefore offers value above and beyond existing currency mediums. Programmability is another feature that could unlock additional avenues for innovation and precision in value transfers.

A tokenized digital dollar could enhance confidence, efficiency, and functionality in dollar payments across retail, wholesale, and international payment use cases:

Among the multitude of highly effective payment options in the US (e.g., cash payment, credit, debit, etc.), a digital dollar would offer a new choice for digital transactions, instantaneous peer-to-peer payments, and in-person transactions. It could also potentially lower costs and further diversify payment rails.

A digital dollar could be distributed to the end user through commercial banks and trusted payment intermediaries while facilitating financial inclusion by broadening access to services via additional mechanisms, such as digital wallets.

In particular, a digital dollar could expand the ability of currently un-or-underbanked populations to access digital financial services and transact on e-commerce platforms that do not deal in physical cash. Bank notes are often used to make small payments in the physical world, although, on average, physical cash usage is in decline compared against other payment methods. This dynamic is likely to progress in a post-COVID 19 world, thereby making it increasingly important for digital financial options to extend more broadly.

Current wholesale large value transactions are account-based and predominantly executed by banking and payment providers who have accounts with the Federal Reserve. Due to the nature of the prevailing account-based system, only organizations with accounts can transact in central bank money.

Just like a physical dollar, a tokenized digital dollar would provide alternative access to central bank money outside of accounts. Accordingly, it could facilitate broader, more diverse access for institutions to large value payments and support the emergence of digital financial market infrastructures.

Furthermore, from a settlement perspective, a tokenized digital dollar could provide atomic delivery, either Delivery versus Payment (DvP) or Payment versus Payment (PvP). These potential approaches could serve as a way to reduce fraud and counterparty risk, although the decision for settlement time duration will be a business and/or policy design choice to determine the optimal settlement window for transactions.

The use of a digital dollar in cross-border and offshore transactions would allow digital payments in central bank money to be made for remittances and large value payments, including the possibility to conduct offshore securities settlement. 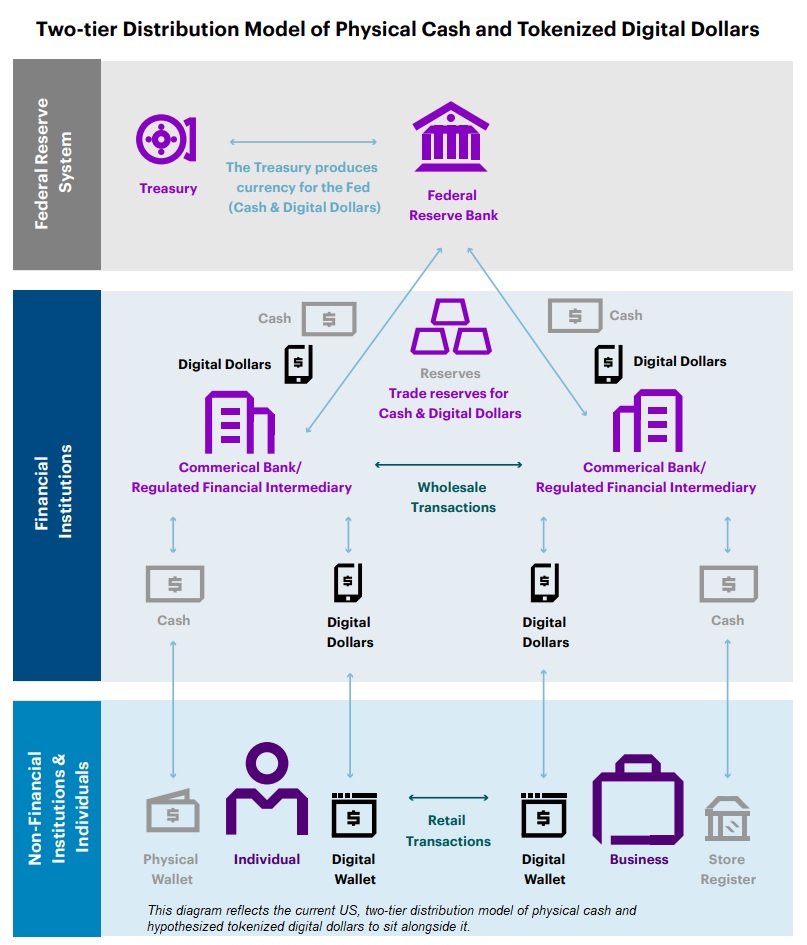