The top ten challenger banks by value – and why

Challenger banks have raised hundreds of millions in venture capital to take on bank incumbents. But how are these startups doing at reaching, converting, and engaging millions of customers?

The UK, in particular, has seen the most challenger bank activity compared to other regions, as a result of progressive regulations enacted to promote competition and break up the banking monopoly.

Over the past few years, the EU’s progressive regulators have made it easier for leading challenger banks to obtain the financial license necessary to operate. In the case of Atom Bank, Tandem Bank, Monzo, Starling Bank, and N26 they obtained a full bank charter, which takes up to two years, but widens the services they can offer consumers. In pursuing this time-intensive process, these challengers bet that a charter would build trust with consumers and allow them greater flexibility in building their offerings.

Revolut’s strategy on the other hand has been to get an e-money license which can be obtained much more quickly, though the scope of services that can be offered is more limited.

Challengers have also been able to expand within the EU by leveraging the European Economic Area (EEA) “passport.”  The passport enables a firm licensed in 1 of the 27 EU member states to provide financial products or services in another country without needing further authorisation in each country. N26 has already leveraged a passport to expand its service to 17 other EEA countries.

Regulators in the EU are still very active in enabling challenger banks by implementing rules that give challenger banks room to grow. This includes regulations like the UK’s Open Banking standards and the EU’s Revised Payments Services Directive (PSD2), which both went live with phased rollouts in January 2018.

Open Banking and PSD2 standards allow third parties to safely and securely access customers’ current account data at their request. This means there’s a big opportunity for more FinTechs to plug into traditional banks and build new services for consumers.

Firms that partnered with other FinTechs like Revolut and N26 have been quick to add new services, which has helped them drive down costs and begin breaking even.

Following this, other challenger banks may ramp up partnerships, especially now that the UK’s Open Banking standards and the EU’s PSD2 are live. Starling Bank is already taking advantage of the new standards and is aggressively pursuing partnerships with other FinTechs. In 2018, the company launched an API marketplace and is aiming to integrate with 25 FinTech startups.

Moneybox, for example, was one of Starling Bank’s earliest partnerships. Moneybox is a digital wealth management startup that makes fractional investments for customers with spare change that is siphoned off of every purchase and automatically invested in a savings account. Moneybox leveraged Starling’s API to improve the investment allocation time from once a week to real-time.

One drawback to this partnership approach however is it’s easy to replicate. In fact, Moneybox is also planning to partner with Monzo and has an existing partnership with Revolut. Other challenger banks like Atom Bank and Tandem will also likely increase partnerships to achieve cheaper customer acquisition, increase speed to market with new services, and contain upfront infrastructure costs.

These top 10 challenger banks represent five countries across three continents. Latin America has increasingly invited FinTech innovation, nurturing challenger banks like Brazil-based Nubank and Argentina-based Uala. Six of the 10 companies in our graphic have raised funding in 2020 so far. This has included 4 mega-rounds (deals worth $100 million+). 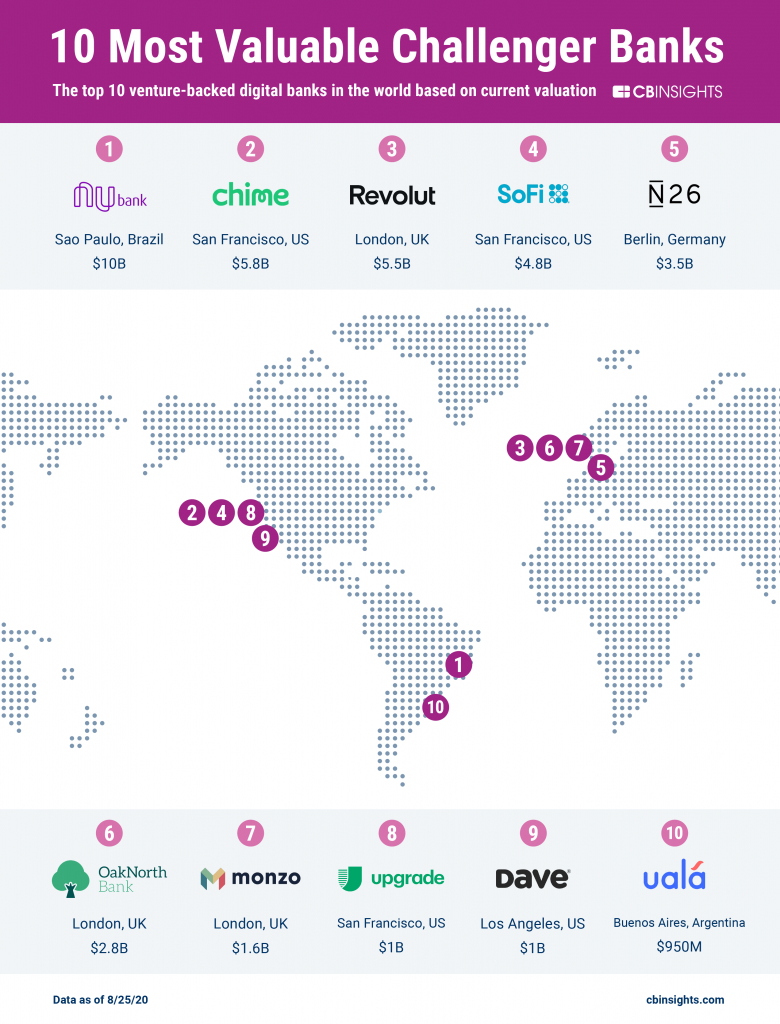 The post The top ten challenger banks by value – and why appeared first on Payments Cards & Mobile.